Difference between revisions of "Matrimelee/Olof" 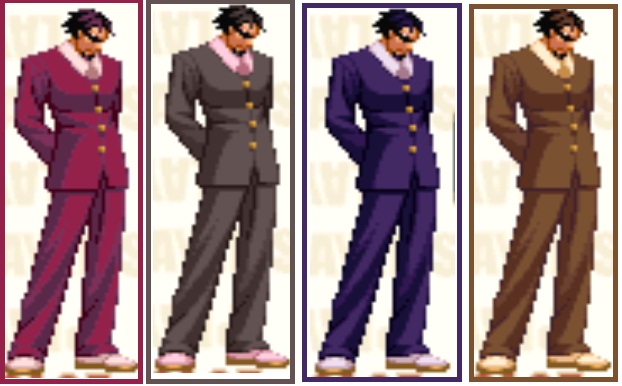 Olof is a character who can deal with many situations due to his Multi-way projectile, anti-air moves with good range and some gimmick special moves wich can condition the opponent and force hit to think how to move and defend since Olof can punish most of the opponent moves.

Olof's main strategy is Hit n' Run, this is archieved by using his Multi-way projectile to do 50/50 and then taking advantage of the opponent's moves to open offensive, connect your best move and reteat to repeat. Since his moves requires good reads to work as planned most of the time you could leave yourself open for opponent combos instead follow your strategy, this makes Olof relya on 50/60 and the opponent's reactions to work as expected.

As Olof has good moves, they are balanced by either high recovery or obvious weak points that any observative opponent can find and abuse.

Revolver Shoot 236A/B/C/D
Olof turns arround and executes a kick that releases a fire projectile, The button used determines the directon of the projectile:

Good move to punish airbone or low attacks if you can read the opponent's moves, this move is not worth to use at mid or close distance unless you combo it since the recovery frames are high wich will leave you open for punish if is blocked, only reliable from far or 1 screen away.

Rocket Kick 214B/D
Olof kicks the opponent by throwing him into the air, then finishes him with a kick that sends him to the corner. The B version does a little dash before the kick and the D version does a long dash.

Misille Kick 66214D
Olof does a powered version of Rocket Kick that knockdowns the opponent.

You can hit confirm this move with 66A/C, as almost any running move of this game.

Flying Assault 214B/D on Air
Air version of Rocket Kick, both do the same damage and knockdowns the opponent. Can hit grounded opponents too.

Flying Revolver 214D during D version of Flying Assault
After the move, Olof shoots a fire projectile to the opponent, increasing the damage.

This move is gimmick, if the opponent jumps while you are at air then you can use it to punish the opponent's offensive also can catch tall ground opponents but is really unsafe on block and mostly will fail small characters like Ume/Tane and Kanji, not recommended for use outside air-to-air punish.

Thunder Kick 623B/D
Olof executes a kick that launches him on the air and falls down with an overhead axe kick. The B version moves Olof a little and hits 2 times, the D version travels further, higher and hits 3 times.

Surpisingly safe anti-air on both versions, can be air blocked but will push the opponent back. The last hit of the move is overhead so will annoy Low Guard abusers.

It can be confirmed from 66A/C, works as half screen anti-air at right timming.

Auto-axe Kick Hold N for 5 seconds
Olof will raise up his leg and stay like that for several seconds, if he gets hitted by a Mid attack it will counter with an overhead Axe Kick.

The hardest apply special of the game, it requires too much time and only counters medium hits, don't recommended at all, but if your opponent not pay attention to your moves then you can stay quiet on the round announcement and start with it.

Poison Plague 2363214D Stress Shot (lvl 1 Super Move)
Olof will dash with invulnerability during 1/2 of the screen, after that he will do a high kick, if connects will release a 14 auto combo.

Pretty hard to land due to the branch between the start and the hit, the dash is invulnerable and can be used to counter projectiles and similar moves of low active frames but you need to calculate the distance so it lands, the best use for this move is against reversal move abusers, once he is down wait for he to throw his attack and automatically do this move, if you timed it rightly and your read was correct then will connect.

Mind games move, you can fake the opponent with this so his reflexes play against him and he jumps thinking is the real move, there you must go offensive, not effective against smart opponents since they will notice that you spend 1 gauge instead 2, if that happens and you are close then you got yourself into a trouble.

Draining Punch 412146C Ippatsu Ougi (level 2 Super Move)
Olof charges and releases an extremetely powerfull punch that will drain a portion of your Health Bar, this drain can be recovered. Unblockable.

You really want to learn how to confirm this move since it hurts a lot, the bad point is that it can be jumped. The start up has several invencibility at upper body so will counter high attacks and some projectiles.

623.C and 412146.C are links, but stills powerfull since they are Overhead and Unblockable respectively.

5.D Follow causes Knockdown, 3.B must be canceled on first hit.

This combo is kinda hard to pull out and will miss small characters like Ume and Tane, you must input J.D at the top of your jump since it has a little delay by default.

Input the J.D at the top of the jump or you will not have time to input the 2nd one before fall, cancel 3.B on the first hit.

Hardest Olof Combo, the timmings are really tight and mostly goes out as a link, but the damage is really high, 3.B must be cancelled on 1st hit.

Olof's best move and the most powerfull Ippatsu Ougi of the game, confirm it will lead you to the victory and here i show you a list of hit confirms for it:

The most simple one, cancelling 3.B on its first hit will confirm the hit if the opponent follow the reflex of block instead jump.

This one works better as punish for DP's or some high attack, also works on recovery roll

A little complex one but rewards since its his best confirm, the only 2 ways that the opponent has to escape are jump at the right time or get an Stress Gauge from 5.D, so be carefull with that.