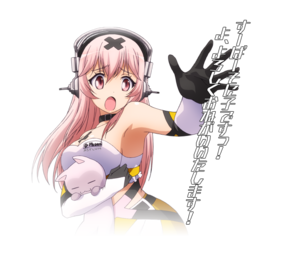 Debuted in: The 2006 Nitro Super Sonico concert, as the mascot

Introduction: A hard working modern-day college student who's a part-time gravure model, waitress at her hometown pub, and the vocalist and guitarist for her band, First Astronomical Velocity. She lives on her own with her five cats. Her favorite foods are chashu ramen and macarons.

Sonico is defined by two things: Strong knockdown game (with a good oki tool in her 5E that can also give her very tricky high/lows), and normals that are performed by her cats instead of herself, thus not extending her hurtbox and letting her perform them in the air as well as on the ground. She has low HP and fairly small damage output, though, and her reversal options are poor, with even her backdash having no invuln on it by virtue of actually being a backwards run.

Sonico has the standard movement options everyone does, except for the above-mentioned backwards run in place of a backdash, trading the utility of invuln for better ability to create distance than anyone else. Her jumps are almost as floaty as Saya's, but she can fall down quicker by using one of her air specials (she keeps in the recovery though), and her j.D starts moving her to the ground very quickly. Her airdashes don't cover much distance, but also don't last very long, making them somewhat safer than others.

A note on Sonico's normal moves: All of her B, C and E buttons are performed by one of the three cats that follow her around. The cats form a line, with the foremost performing the next-used move and then moving to the back. The range of these moves is dependent on the cat's position and not Sonico's, and all can be performed in the air, too (your recovery while performing them in the air still carries over to when you land, you won't return to neutral immediately). The cats do not have a hurtbox, but will lose their hitbox if Sonico is hit before they connect. None of the cat normals are chainable into others, and all can be cancelled into her specials, supers and jumps on whiff.

The cat in Sonico's arms does a slash. Very large cancel window, hits crouchers, cancellable into everything except for 2A.

Three slashes from armcat. Can whiff if the 5A hit from far enough. Is cancellable into everything 5A is, but only on the last hit.

Armcat punches, knocking the opponent away and down. Chains into B/C/E moves.

Crouching armcat slash. Unlike other 2As, this is not indefinitely chainable into itself (a third input will give you 6A), and also doesn't whiff cancel into her 5A. Cancels into everything.

Big downward swing that knocks down, go-to jump-in unless you have a 5[E] set up.

Reasonably far cat leap. Is jump cancellable, but not at the earliest point it can hit; if they're sufficiently close, you'll need to delay it.

The cat slides across the ground. Go-to low option, knocks down.

The cat travels to the opponent and headbutts them. Only tracks their vertical position, but will reach fullscreen if they remain on the ground. Jump cancellable.

Cat leaps into the air. 4 Hits. Is plus if performed at the right distance (you can even link a 5/2A after if it hits).

Cat leaps into the air. The disjointed box and fast startup make for a decent anti-air. Jump cancelable

Cat leaps and does a downward slash. Is an overhead, and plus enough to link into 5A after.

The key to Sonico's oki and how she converts off her mixups: Holding the button leaves you able to act before it hits, letting you be plus on block and giving a wallbounce on hit, which can be followed up with 214C midscreen and 6A in the corner. If you can find the space, this is also a good neutral tool, as it covers a wide amount of space and lets you get in if it's blocked.

Cat sweeps across the floor. Very big range and hits low, and unlike other sweeps, its special-cancellable.

Like Sonico's normals, none of her specials are performed by her, instead calling her bandmates. 214C is a prime tool to catch people trying to zone at fullscreen, coming in from directly behind them and letting you followup with 623C into supers. Both this and 421X share a cooldown of sorts where you can't perform either until a small amount of time after the bandmate goes off-screen, and both of them will keep active if Sonico is hit. Neither can be assist/super cancelled.

A bandmate drops on the opponent, with button determining the position. Another anti-zoning tool, and is also used for crossups (you need resources to convert though). It also hits overhead, and the A version is used in air combos to get another chain.

Bandmate comes out to uppercut. Not a reversal. Generally used to convert into supers from 214C/air combos. The air version's fastfall will actually crossup in the corner on everyone outside of Saya, Ethica, Ignis, and Sonico herself.

Sends a bandmate forward, drumming on the opponent when they reach them. Kind of acts like a projectile, but you're in recovery the entire time, so it doesn't really have the utility; more or less a combo tool for easy knockdowns/damage in EB.

Big drop kick into another one that wallbounces. Slow, but has invuln and pushes them far away if they block. Can combo from 236AB.

A 236X followed by a 623X. Generally the super you confirm into for meter extensions. Very fast, but does not have invuln.

In addition to the three that constantly follow her around, Sonico is also accompanied by a fourth cat that starts the match asleep. At intervals of about 7 seconds, it'll wake up and move to her position, then fall asleep and repeat the process. 214AB is what this cat is for: A command grab performed at whatever position it currently is. You can combo off it easily, and, like the other cat moves, you can perform it in the air, so it's a good option in both neutral and (if its near you) offense.

Cat leaps at the opponent, then all the others maul them. B ender launches, A ender does the most damage, and C ender scales the best in combo.

Makes all of Sonico's attacks unblockable for a short time, which would be nice if you didn't really, really need the meter for damage; this is basically never used.

Sonico's meterless combos are most entirely centered around 6A/2C into an air combo ending with j.AA. The full sequence is j.A>j.A>j.421A, j.A(1)>j.A>j.AA>delay j.2C>j.D, j.2A(>j.E), but you need to subtract moves depending on whatever the confirm's proration is (although you can get the 421A to j.A link from almost anything). It's possible to get this sequence from most anything that isn't a cat normal without 5[E] to back it up.

The standard metered extension from your air combos is j.421A, j.A>j.AA>j.623A>236AB, 421AB. That's pretty much it: There isn't any better way sans assist cancels for your meter to add more damage. Seems unappealing, but its the price you pay for your oki/neutral game being as good as it is.

The most standard assist extension, the reason Carol's such a common pick, and generally how you end rounds.

Same concept from the fullscreen confirms.

You can also combo into Carol from Variable Rush. This is also doable from Kaigen restands if you're using her.

Carol is how Sonico ends rounds, making up for her otherwise low output by being easily comboable from double super/Variable routes.

Cat moves are fairly horizontal, meaning Sonico can struggle in air-to-air situations, but that's not a problem if you just straight up stop them from jumping. Yoishi's also good at keeping them in the corner post-mixup, something Sonico can otherwise have problems with.

Akane's stagger time is large enough for you to get Noodles set up, and comboable into through the 236AB restand.

Kaigen is another option for getting big damage to end rounds. If you want, you can even double up and use her to combo into Carol, though that's probably unnecessary.

Sonico's level 3 disabling blocking, can make it more difficult to deal with than normal.