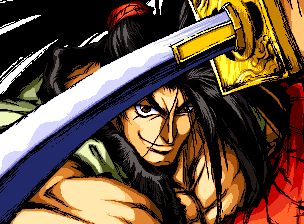 Slash lets Haohmaru control space with his air specials, which he can do from a backdash in true SNK fashion. His toolkit opens up some fairly basic yet rewarding combos, with even the shortest backhit string ending in Zankousen for huge damage. He gets pretty far on honest SamSho gameplay, even in a game that tends to reward far sillier strategies. Slash’s struggles are due purely to his lack of high-damage grime, but his funky space control and burst damage on big openings give him just enough spice to hang with the rest of the crowd.

Bust loses the good longer range neutral tools from his other Technique, instead becoming SamSho 3’s most infamous gorilla, gaining numerous moves that handily outshine Slash in almost every way. He has a simple front-hitting infinite, a dominant neutral game laden with mixups that easily lead to his infinite, and an irritatingly safe reversal that also leads into said infinite, because of course it does. If you want to not think and play the best character in the game, Bust is the way to go.

While Slash wants to carefully manage space and frustrate people into coming to him, Bust wants to get the hell in, and by lord is he gonna make it hurt when he does.
For what he lacks in overall neutral options, he more than makes up for with the ability to just end the opponent's life in one touch. In the neutral, your goal is to find a window to catch them with Senpuu Ha or 66B, which at most spacings gives you an easy infinite that just ends the round right there. Though of course it won't catch airborne opponents, but you've got Kogetsuzan and Nagi Yaiba to anti-air bad jumps with with.

Up close, Bust gets to pressure people with his frankly unfair mixups -- 2D is still a very abusable low that can combo into 236D if your timing is good (it probably isn't, though), and still functions as a hard-to-see mixup if your timing isn't so good. Bust Haohmaru really doesn't have to work too hard to get hits in, but he is arguably the best in the game at making those hits count. If the opponent absolutely refuses to block low against your onslaught of 2D, just keep using it. Either they block low or get deleted for avoiding the overhead.

As if all of that wasn't enough, you also have some very powerful defensive options in Bust. Almost any gap in the opponent's offense is can be exploited by either Senpuu Ha or a Nagi Yaiba. If the opponent has an option that cancels on block into a slow but otherwise safe attack, such as Shizumaru's 5C into Kirisamejin cancel, Senpuu Ha will easily catch them out of the followup. It's even fast and long-ranged enough to punish a large chunk of the cast's heavy slashes on block, which is an incredible boon to have in this game. Nagi Yaiba's strengths are pretty self-explanatory, with its invincibility window on a successful "catch" being long enough to almost completely ignore even a Bust Genjuro card bounce setup. As is a tried and true saying in SamSho 3, abuse this as you see fit.

Being able to link out of a fairly abusable low kick is nice for Haohmaru to have, and lets him score a knockdown if he doesn't find himself in one of the situations where he can't combo 2D into itself enough times to get a stun. You can use 623C instead of 623B for more damage, but the final hit of 623C has a propensity to whiff.

Corner stun combo: 2D(x8)
You need to be very close for this to work, so it's almost exclusively possible after a forward throw in the corner. Unless you play Basara on the side, you're not likely to land this

Alternate back hit BnB: n.2B 5B xx 63214C
When you aren't at the proper spacing for 421A, just cut the combo short to still keep a lot of damage on the table.

Air Resshinzan conversion: j.214C 66B xx 623C/623623AB
Sadly the most you'll get from a good Resshinzan, but it's pretty reliable as long as you remember to run very close for the 66B. You could also just do a 5C or Zankousen instead if that seems daunting.

Front hit Gou Ha juggle: ...66B xx 623D 623C
Probably your best bet to finish off a front-hitting infinite for maximum cool factor (you might even substitute a WFT for the DP), but it's possible to be too close and have the Kogetsuzan whiff, or be too far and have the Gou Ha whiff. Spacing this right is obviously important.

Alternate front hit loop: ...236D [623D n.5B xx 236D]xN
This combo is more proof of concept with the n.5B restand after a max distance Gou Ha. It's not a consistent loop due to requiring particular midscreen spacing and the timing varying between characters (Nakoruru and Kyoshiro are particularly problematic, and Zankuro seems outright impossible to hit with this restand).

Corner back throw stun combo: b.throw n.5C 641236CD
Yeah this stuns for whatever reason (no, cancelling Gatotsu into WFT does not stun). You could do a more consistent combo option instead of this, but you could also end careers with it.

Corner front throw stun combo: f.throw 2C~C xx 641236CD
Another hilarious career ender. The actual way to get this to come out is a bit tricky to explain. Due to Hien's odd cancel window, the second hit won't actually connect and will instead empty cancel into WFT. Thus the input is done as 2C641236C~CD. In essence, press 2C, do the WFT motion, then press C before pressing CD. Done right, the WFT will come out.

Unreactable mixup "combo": 2D 236D
Timing the link from 2D to 236D, while possible, is quite difficult. Probably about as difficult as switching your block from low to high trying to deal with this combo that is also a really stupid 50/50. Further screw with their timing by varying how many 2D reps you do. Or possibly delay the 236D. Or do 6D xx 236D instead and get an easier combo at the cost of higher commitment. Worth keeping in your back pocket.