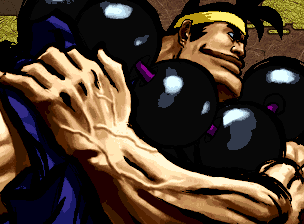 Gaira is a big, strong Buddhist monk who's always grumpy, probably because everyone keeps underrating him. His high damage potential, large amount of tools and ability to crack open defensive players make him a wild card at any level of play. He is a grappler, and has all the tools a grappler needs to hurt people: his command grab has the highest potential damage of any throw in the game, he has a fast anti air grab with good reach, a ground-pound, a sorta fireball with great priority that knocks down and even reflects projectiles, and overhead/low mixup grabs that hit hard. His defense is tied with Gedo as the highest in the game. The downside? He's slow. His hops leave him vulnerable for way too long, his rolls cover barely any distance, and his normals take forever to get out.

Unlike most characters, Gaira doesn't need characters to screw up to do big damage. On offense he only needs to guess right two or three times to win the round. The problem is getting on offense. Because he's so slow he has trouble taking advantage of far knockdowns from a Katsu! or ground-pound. 421A is a great anti-air and lets him get in ideal mixup range, out of normal throw range but close enough to mix up between his command throw, overhead, low, and elbow. 236S works in a pinch, and AB works on characters with slow jumps or air normals without good vertical range.

Gaira's command throw is impossible to do standing, so you have to find ways to sneak in a buffer. The most simple way is doing a normal move like 5A or 5C, buffering 47896 during the normal (hold the 6), then pressing AB when the normal ends. One of his best options is from a run, stopping, and buffering the grab during the cooldown as 6[6]~47896AB. He has several options from a jump: his j.AB has a long startup so you can do a late j.AB, land during the startup, and throw when you land. You can also tick throw with j.A or j.C. He can buffer one from a roll, and while that covers very little distance, it's still a great option. If you're super pro you have a few more options: the startup of his close A can be canceled so you can do 4A~7896AB, and you can even buffer it from meditation cooldown. Get in close, tap D, 47896AB, your opponent won't know what the fuck.

One neat little thing about Gaira's command grab is that the game allows for a 50 frame delay between inputting the 4(7)8 and finishing with 6AB, basically allowing you to "store" the grab for just under a second. This is useful especially when facing players that are good at reading your grab and dodging it with well-timed jumps or D button movements. You can buffer the 4(7)8 part of the command, go for a brief low block (1) or crouch (2), wait if you see any movement, and then unleash the grab by pressing 6AB.

The game actually allows for 10 MORE frames of delay between the pressings of 6 and AB, meaning you can buffer 4(7)8, take a step forward (6), and press AB to activate the grab. It's not really hard to execute but it may still take some practice to get the timing down. Keep in mind it's a 50 or 60 frame store at most so it still has to be done pretty quickly.

Rimu's air iceberg pad has a long startup. If Rimu's trying to turtle in the air you should go for a 421A as soon as you're in range.

Not in your favor. Tam Tam's quick, long-ranged normals can pretty easily beat you out both on the ground and in the air. Get your deflects ready and remember you can destroy skulls so you don't have to take chip damage. Use 2C or 3C to destroy low skulls, and a neutral or forward j.C for high ones.

No but seriously this matchup sucks. He can anti air you on reaction with 2B or Tsubame Gaeshi with next to no risk and even his slow floaty jump lands in time to punish a whiffed command grab. You better hope you can wade through his sea of pokes and anti-airs and land something big, or you lose the instant he backdashes away.