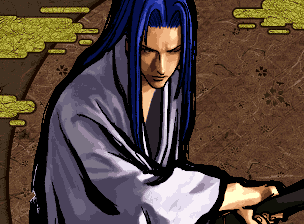 Jokes aside, Ukyo is one of the best characters in the game. He has quick and long reaching pokes, an instant overhead that can combo from a 2C, great ground speed, and hard-hitting punishers. His toolkit lends itself to fast harassment/mixups as well as sitting on a lead. He takes extra damage, meaning he can suffer for a mistake, but he will run circles around most opponents if given the opportunity.

Standard corner carry. 236B does slightly more damage but carries a shorter distance. Pursuit is corner only.
In case you're worried they'll explode. 8BC is a tighter link than 2BC in the above combo and is also corner only.
Reset to neutral. Any heavier version will leave you open.
If you absolutely must use WFT this is the only situation that it'll work in.

2C is low, Tsubame Gaeshi is high. The motion for the IoH should be done right around when Ukyo recovers from the kick in order to time the link correctly. Have fun blocking!

Situational? Yeah. Fast and hurts a ton? Yeah. At least the link is pretty lenient.

Used to hearing about this one yet? If you can't wait for them to come down for the Issen or would just rather a more surefire way to close out the round then do this.

This one hurts a lot and cannot be exploded. Primarily used if you bait a big enough whiff while popping time slow. Use Tsubame before landing (don't tiger knee it), wait a little while for them to fall just around head height before using Issen. Lots of meditation and a full sword gauge for the Tsubame Gaeshi will lead to this easily shaving off ~75% of a lifebar.

If your foe's already spent their time slow/explode and you bait a whiff like with above, whip this baby out and end their career. You might need to walk forward a little bit between the slashes to stay in range.

Ukyo is ideally played as an irritating hit and run character that can choose to mix up when he lands a knockdown. To this end he will harass with quick long range normals, dance in and out of the opponent's range, and smack them for overextending. This makes him potent for both offensive and defensive play, thanks particularly to his incredibly good grounded movement. His forward run has numerous attacks he can mix up and whiff punish with to boot.

If he has the life lead, there's nothing stopping him from just running away and sitting on it. If the opponent has few options to effectively open you up, you can effectively wall them out with normals and punish them for overextending. This becomes very useful when the timer is running out.

But there are a few very pertinent things to be concerned about with Ukyo. He takes a lot of damage thanks to his defense value. Despite his great reach, if a character can outrange him with a quick long range attack, such as Haohmaru 5AB, he needs to be on point with his choices so he doesn't get blown up. Similarly he cannot get too trigger-happy with his buttons against a foe that represents deflects, because all of his best ranged pokes can be deflected and you will get hurt for it.

Almost any mixup Ukyo does is going to be heavily punishable, so if the opponent can fuzzy guard your 2C Tsubame pressure or if they correctly block a 66B, you are going to get hurt. Ukyo requires a great balance of careful play and effective risk-taking in order to play well, but the rewards for a correct guess can be huge as almost any knockdown he gets will feed into his oki or let him run away.

Once he scores a single knockdown, he can start running his oki, which can easily loop into itself and is difficult to block. Making the opponent block or get hit by a 2C opens them up to all sorts of possible mixups if you want to commit. He can obviously do 2C tk.1236B for the classic setup, 2C 66B to cross up, 2C 6C to low knockdown, 2C 66CD to throw, etc. He can pretty safely keep pressing 2C to change up the timing, so getting out can be pretty tough if Ukyo's confident in his mixup.

However, don't abuse this if your opponent is good at fuzzy guarding or has a decent invulnerable move. Getting blocked means you're going to eat a juicy punish, so as they show they can block this correctly, this oki becomes less braindead and requires more intelligent mixing up between his various options. Also note that Tsubame Gaeshi will go right over a 2D, and a poorly executed TK will result in it whiffing over some crouching opponents. Be confident in your execution when doing this mixup or else.

Ukyo has a wealth of good normals and attacks for poking and counter-poking. Here are the ones you'll find yourself using the most in poking/neutral scenarios.

His punish game is exceptionally good. Every option here is lightning fast and will hurt a lot or lead into oki, if not both.

Ukyo's meditation is very strong. He gets a lot of bang for his buck meditating and his time slow is supremely threatening thanks to dangerous mixups that cash out for immense damage with Issen. His damage is already pretty strong without rage as well, so it's not like he really wants to rage. Find spots during slow moments to meditate, usually when the foe is too far to do anything but throw fireballs and try to chip you a bit.

With that in mind if you're in a very scramble-heavy match and you find yourself raging because you didn't have time to meditate don't fret. Ukyo rages for a long time (20 seconds) and his huge damage punishers and mixups all do some seriously beefy damage with extended sword gauge. His bad WFT is tacit encouragement to play out the rage and capitalize hard on his increased damage. Just play your usual Ukyo game and make them hurt a lot for making a mistake.

Rasetsumaru: A reversal super will go clean through anything you try on wakeup, and he rages really fast. His rage doesn't last very long though and his super is mega unsafe. Shoulder crushes 2C spam and DP makes Tsubame Gaeshi completely whiff.