A combo is any series of attacks that are unblockable for the opponent after the first hit. The attacking player can create any number of elaborate combos with the creative use of a few, fundamental mechanics.

All characters can chain cancel their normal moves into other normals on hit or block. Any move from an attack button lower on the chain will cancel to an attack higher on the chain during any recovery frame after connecting. Different characters have different chain combo sequences for their ground and air chains. Chain cancels do not work on whiff.

A link allows a move to hit then completely animate and end without canceling, leaving the opponent in enough hit or block stun for another move to connect. Using links to combo normal moves often requires strict, frame specific timing and is more difficult than creating a combo using only cancels. The most important links appear in air combos that use unchained normals, which can be useful for getting a lander off of an otherwise simple launcher into air combo.

Outside of assists being only usable once per combo, there are mechanics in place that can still consume your assist usage in a combo.

If the opponent hits the ground in hit stun from a non-knockdown move they land on their feet and get 1 extra frame of hit stun. Restands are independent from OTGs and nothing restricts multiple restands in the same combo. Both ground and air moves can cause an opponent to land during a combo.

The game's engine considers character weight whenever the defending character gets hit, starts falling, or changes momentum for any reason. Launchers will generally send a lighter character further than the a heavier character. Certain air combos will not work against every character because of this subtle detail.

* Eliza behaves as a lightweight when she is not in hitstun

Every character has unique hurtboxes, some with differences that may cause a need for combo adjustments. This is a non-comprehensive list of some character's unique hurtbox traits. 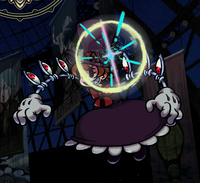 Combo length in Skullgirls is limited by two systems: undizzy and the infinite protection system (IPS). Both act as a set of rules for what you can do in a combo, and if the rules are broken, they both result in the opponent being able to burst. When the opportunity to burst is available, the hitsparks and hit sounds will change. Once that happens, the burst can be performed by pressing any face button.

Bursts are not a fail safe option, and can be baited to whiff and be punished. Whether or not the burst's recovery is vulnerable or not is determined by the type of burst. There are gold bursts (safe) and blue bursts (punishable). The color is indicated by the effect surrounding the character when they perform a burst. There are a few factors that determine the color.

Before learning how undizzy and IPS work, some information on how the game reads combos is necessary. Combos are made up of a series of chains. A chain is a series of attacks that follow the order of normals > specials > supers > DHCs. Each chain in a combo will advance the combo stage, which increasingly add more limitations to the combo. The early free stages will not have any limits. The watched stages will start accumulating undizzy, and keep track of which buttons you use for IPS. Finally, triggering a burst is only possible once the combo reaches the limited stage.

In order to gain a better understanding of how this combo system functions, set the 'attack data' training mode option to 'basic' or 'advanced' and the attack data will show what stage the combo is currently at.

This is a Filia combo with each chain notated with its stage. (video)

Once undizzy has reached 240 or above, the bar will flash and the next new chain will allow a burst.

After exiting hitstun, undizzy will not immediately go away. Instead, it drains over a period of time. This means doing fast resets will carry over some undizzy from a previous combo. 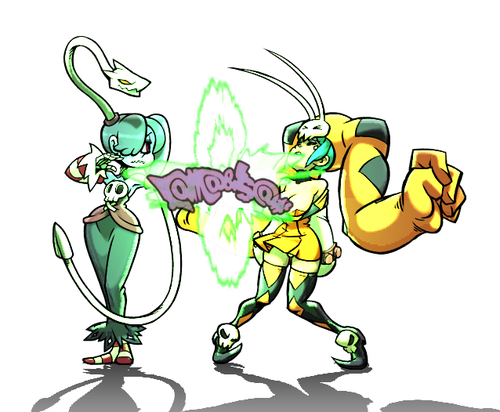 Squigly's combo triggers Undizzy and Cerebella can now choose to burst by pressing any button.

Undizzy is a combo length limiter represented by the green bar under the health bars. Once a combo reaches stage 3, hits in a combo begin to fill the opponent's undizzy gauge. If the combo beings a new chain at stage 5, and the defending character has 240 or more undizzy, the combo becomes burstable.

The undizzy value won't drain immediately after exiting a combo, it will instead drain slowly. This affects reset strategy, as doing a building up the undizzy bar before doing a reset will make the resulting combo less rewarding.

When the undizzy bar is full, other penalties are applied as well.

Bursts from undizzy will result in green hitsparks. This does not affect the resulting burst, it's just to indicate how the burst happened.

Undizzy is also known as drama.

Attacks add undizzy based on set values for the type of move:

Characters can accumulate an undizzy value beyond 240, although it will not be reflected on the HUD.

An attack that chains into itself and attacks with multiple hits will add undizzy only on the first successful hit.

Undizzy decays over time when the opponent is not in hit or block stun, and if it accumulates over the 240 limit it will take even longer to clear. A full undizzy gauge will drain over a maximum of 60f for 350+ undizzy, scaling from a slightly slower decay rate at values over 150 to a faster rate as the bar empties.

At 240 undizzy or above, the bar will also wait for 4f after recovery from hitstun before starting to decrease.

Some other actions will also drain undizzy: 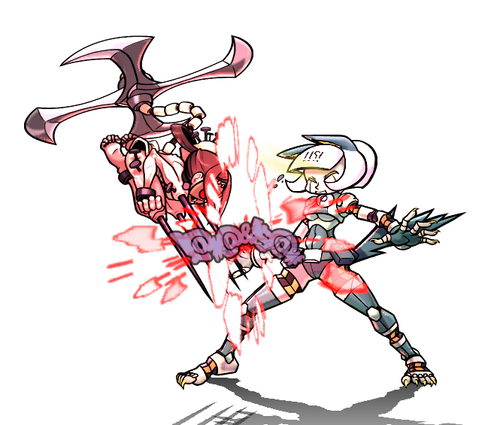 Painwheel's combo triggers IPS and Robo-Fortune can now choose to burst by pressing any button.

The infinite protection system (IPS) will keep track of what buttons are used in a combo starting from stage 3. Once the combo reaches stage 5, if a new chain is started with a button that has been used, the combo becomes burstable.

While the undizzy system will technically prevent infinites on its own, IPS predates undizzy and was kept in the game. IPS largely dictates how combos are structured (it won't let you loop the same chains repeatedly for example) and in turn gives the player more options to intentionally trigger a burst for a bait.

Bursts from IPS will results in red hitsparks. This does not affect the resulting burst, it's just to indicate how the burst happened.

In order to gain a better understanding of how this combo system functions, set the 'attack data' training mode option to 'advanced' and see how the display changes as you perform combos. The center display will turn buttons red as they're being tracked. If a burst is triggered, the button that caused the burst will turn white. The bottom half of the circle indicates ground buttons, and the top half air buttons. The circles off to the side represent character specific specials.

Prominently displayed on the HUD, life is the most important thing to keep track of while playing Skullgirls. When you take too much damage you lose!

The exact individual character life and damage differences between solo, duo, and trio teams scale differently depending on the match up. The values do not scale linearly, allowing the consistent timer for all match ups and team size combinations. To see how much damage is needed to kill different ratios with damage buffs taken into account, see here

Attack damage scales down at a compounding 87.5% per hit after the 3rd hit in a combo. Damage scales to a minimum 27.5% for attacks with base damage of 1000 and above and 20% of base damage for hits under 1000 base damage. Some moves have their own minimum scaling, in order to do more damage once the normal damage scaling is in effect. Minimum damage for any hit is always 1 point.

All damage dealt to assist characters gets a 35% increase, but is dealt entire in red / recoverable health.

If an assist starts a combo, it sets damage scaling to 66% for the combo. Landing the assist as a counter hit reduces this penalty to 90%.

All damage when above 240 undizzy is scaled to 55%, with the same minimums as normal.

Once a combo becomes burstable via undizzy (green hitsparks), damage is scaled by an extra 50%, and can go below minimum damage scaling. This doesn't apply to bursts via IPS (red hitsparks).

Generally, level 3 supers have minimum damage scaling of 45% and level 5 supers scale to a 55% minimum, ensuring the attacks deal enough damage to justify their high cost in meter. There are some minor exceptions

DHCs reset damage scaling to 70% at the super flash. Projectiles have their scaled damage determined from when they hit, even if left on the screen during the additional super flash.

A throw will freeze scaling for the duration of the throw. 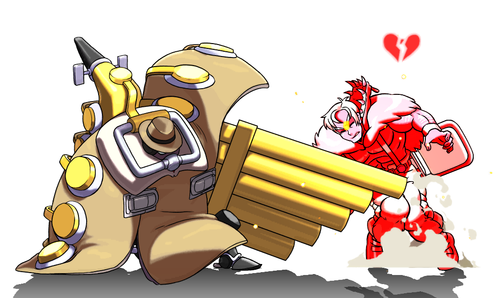 The start up, active, and recovery frames of an attack leave the attacking character vulnerable to a counter hit. When counter hit, the defending character flashes red and a broken heart effect appears over them.

After getting hit, Valentine has some red health.

If a character takes non-recoverable damage for any reason, even if it's a single point of chip damage, the team cannot recover the health and still get a "perfect" message when winning the match.

Teams gain meter while attacking, blocking, and taking damage. The meter fills from 0% to 100%, stocking up to the maximum 5 full bars of meter. The meter gained per attack depends on a meter value specific to the attack. Team size will not change meter gain.

Point characters can spend the team's meter for supers, DHCs, alpha counters, and snapbacks, and Eliza can spend meter on Sekhmet. Attacks that use meter do not gain meter for the attacking team on hit or block, but can still give meter for the defending team. Both teams start with 1 free bar of meter.

This guide lists meter gain per attack as the meter generated for the attacking team with a successful hit, no damage scaling, and at least 1 meter already stocked for the team.

On block, attacks give a fraction of their base meter with no scaling effects:

Normal moves give a small amount of meter on whiff for the attacking team if the team has less than one full meter. When jumping away from the opponent, whiffed normal attacks will never gain meter. The whiff generates meter on the first startup frame of the attack, independent from the meter on hit or block. For a single hit normal move, whiffed meter is the same as the base meter value for the move.

Most specials always generate a small amount meter on whiff. This meter gain is independent from any form of scaling and is awarded on the first frame of the move.