Difference between revisions of "Under Night In-Birth/UNIST/Merkava" 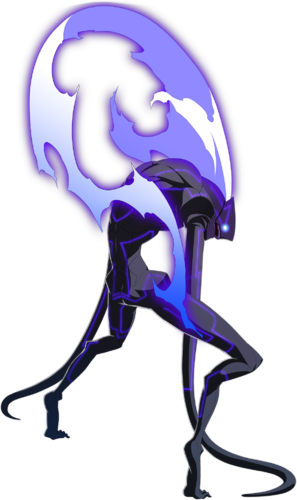 A mysterious man(?) who has fallen into the corruption of a Void -- thought to be the failed shadows of Re-Births. Many are fascinated with its form of existence most recently a woman named Hilda has been pestering Merkava quite thoroughly. On this Hollow Night, many In-Births gather, and something doesn't feel quite right. "Heh, perfect..." He'll have plenty of victims to satisfy him. The hunt will go on.

Merkava is a flexible, hybrid character able to play effectively at all range bands. With far hitting moves such as 5C and j.B along with combo starter mid range normals like 2C and 5B he can turn any error in neutral into damage and oki. Errant 5C counterhits can lead into 214A grabby hands to get you in and ready to rock. He can rush down with a high damage throw, far reaching normals, and some of the best oki in the game. This all comes together with high levels of mobility coupled with flight enabling you to weave in and out of your opponent's range while possibly vaulting right over their attacks with 66C.

His defenses are very solid, with one of the highest reaching anti-airs around, a reversal that can be tough to punish while leading into tons of damage, and a 2A which can catch some attempts to assault over it! It would be remiss to not also mention his divekick, which is fast with a low enough recovery that even when minus on block you can steal turns.

Merkava's main weakness is that outside of oki, he has trouble continuing pressure with no solid rebeats that enable him to restart his offense and no instant j.A overhead while close up. His reversal options also lose their invincibility by their first active frame which can lead to poor trades against very active moves. In addition some characters have the ability to shut down his longer ranged attacks, forcing him to rush down instead of being able to easily move between different ranges. Merkava also lacks a fast and safe mid poke to cover multiple angles of approach, instead having to rely either on strong lows or slower mids, making spaced assaults risky to counter.

Your goal as Merkava is to operate at whatever range the opponent is most uncomfortable at, winning vorpal, and using any stray hit to push them into the corner where your flight and worm oki reign supreme. You want to set the pace and tempo of the match in order to eventually overwhelm your opponent and get them making mistakes so you can punish them for everything you've got.