The 2-in-1 heroic ninja from Sora is here to give all the fight they’ve got! Mira is a versatile character with high damage potential, good space control and a variety of powerful hypers. Though their matchup spread is largely negative (due to their slow dashspeed and terrible meterless offense) their unpredictability is what allows you to snag victory from your unsuspecting opponents.

Mira's primary goal is to abuse their exhorbitant meter gain so they can damage the opponent with their hypers, mainly Tornado (Neutral Hyper) and Beyblades (B Hyper). Tornado is a spammable any-range option that can lead all the way up to a 3k damage combo, while Beyblades significantly improve Mira’s melee abilities. Mira also has a low-startup melee combo in the form of SP Hyper (whose range is boosted significantly if cancelled from the first few frames of SPwA), and a potent, hard to avoid game-ender in Accel Hyper. Note that most of Mira's hypers are vulnerable to being shieldbroken by melee opponents; using these at the right time (or knowing when to use meter on shields instead) is part of the difficulty curve in learning this character.

Mira’s offense without their hypers is weak and relies on baiting or trapping your opponent. This means good meter management is vital to playing Mira well. Generally, Mira will pressure the opponent and interrupt their attack patterns with Shurikens (wA) and Knives (Hold wB), while controlling space and defending themself using Smoke Bombs (SPwB) and Caltrops (dash wA), a pair of attacks that limit your opponent's movement options. Almost all of these attacks have incredible meter gain, but they won't easily lead to combo damage. Their greatest benefit, rather, is that they manipulate your opponent and make them hesitate to approach, giving you some temporary leeway to build meter.

Mira has a ginormous arsenal of attacks, all of which are important in winning damage trades and remaining unpredictable. This, combined with the large number of ‘techniques’, combos and disadvantageous matchups, means that Mira takes a lot of effort to get used to. Incorrect Mira play against certain characters will result in a quick loss.

PSA: If you're an apprentice Mira, it's better to skip right to the Meter section of this page. Mira's meterless combos are difficult to pull off and require great awareness.

Mira has a veritable army of combos whose scope goes beyond what's listed on this page. A few tips to keep in mind regarding combos: 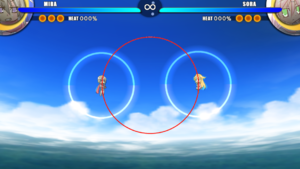 The ideal range to land forward-hold shurikens from. Any closer, and you'll either whiff or drop the combo halfway. Any further, and the opponent'll escape before you can hit them.

Mira's meterless offense is weak. As a result, most of their meterless combos are not tight, and focus mainly on punishing the opponent's rushdown or mistakes.

Terrible. Don't use this without knives/smoke. Leaves you at a significant frame disadvantage even if it's not punished.

SPwA's 1st hit > input the 2nd hit > let your previously thrown knives bridge hitstun > finish the SPwA combo. Significantly more viable in smoke. Any hit of SPwA can combo into knives like this, but hit 1 auto-cancelled into hit 2 causes the longest amount of hitstun to set it up with. Note that you can even delay the 2nd attack by a few frames, since it extends the opponent's current hitstun on startup; this is handy if you think you'll need an extra few frames for (hwB) to land.

Close-range shuriken punish > melee followup. Mainly used to punish Tsih's SPwB. If you're in a situation where SPwA will be punished, it's better to dash cancel into dwA or SPwB instead. Don't use all your shurikens if you're landing the combo in smoke, as landing multiple sets of shurikens is reliant on knocking the opponent back (which smoke neuters).

Caltrops > letting your previously thrown knives hit them, and/or following up with SPwA. If you're lucky, dwA > SPwA will be tight, but it varies depending on how many caltrops hit. Significantly more viable in smoke.

Only viable in smoke. Essentially a gamble where you guess how long the opponent will be hitstunned by knives, and use shurikens for a brutal followup. Can be used as an extender from dwA > (hwB) or SPwA > (hwB).

Tight combo where you catch an opponent strafing around you point-blank with the initial throw of hwB, and then follow up with dwA. Can lead into dwA > (hwB)/SPwA, which is very dangerous for the opponent in smoke. Alternatively, you can finish the combo with dwA and simply use it as a chance to set up smoke.

Worth noting due to its potential to scum wins by timeout. With moderate spacing and frame-tight execution, dwA can infinitely combo into itself, allowing Mira to hypothetically win games by timeout once they have a HP advantage. Very egregious to try and master. Note that because this loop quickly builds heat, dropping it means you're going to be punished HARD. (On a less scummy note, you can also use this loop to land (hwB).)

The standard mid-range combo every single Mira player should learn. Can easily lead to 2-3k. This combo is the reason why opponents will goldshield tornadoes. SPwA (invuln) > Neutral Hyper can help position yourself close enough to be at shuriken range. Depending on the situation, you can choose to link this into dwA or SPwA, or just follow up with a smoke bomb.

Usually a happenstance combo that results from knives forcefully ending a tornado combo. Still does more damage than raw tornado, although the necessity of knives in neutral and their ability to interupt nHyper > wA can be annoying at times. Significantly more viable and less shuriken-disrupting in smoke.

Tornado into trikinves. Only viable in smoke (can be pulled off outside smoke, but requires razor-precise movement and is frame-negative). Requires close proximity to the opponent and is only worth using when wA ammo is dry, but it still does a hefty amount of damage, especially if you have enough wB ammo for all 3 triknife sets.

Same as above but with Accel instead. Only viable point-blank in smoke (SPwA (invuln) > Accel can help set this up). Accel > Shurikens only works point-blank and is very inconsistent, so this route is preferred.

Try not to use this.

Beyblade melee combo. Mira's other most important combo; pretty much always tight if you start with 70% wA ammo and the first b.SPwA is landed at close-mid range. A third b.SPwA has a small chance of being tight outside smoke, but it's generally not worth the lower damage, risk, and heat gain. In smoke, this combo becomes significantly more reliable, and it's possible to repeatedly spam b.SPwA all the way until the smoke disappears; although this can easily backfire on you afterwards due to 300% heat.

Tornado into beyblade melee. Can combo from a slightly longer range than nHyper > wA and is easier to execute, but doesn't deal as much damage. Consider only using b.SPwA once if you're concerned about heat gain.

Tornado into 'Let it Rip'. This is the long-range combo for when you've got a 2-0 meter advantage over your opponent and have beyblades up; very niche, but very powerful, especially with the help of the shuriken followup. Note that due to the rings left behind by the tossed beyblades, it can be slightly tricky to aim forward-hold shurikens due to the opponent being bounced around, making the long-range shurikens a safer option.

Setup combo where you throw out a triknife/beyblade and land tornado on your opponent so it'll hit. Adds a chunk of damage from time to time, making it an okay long-range harassment option.

Doesn't require any ammo. Emergency close-range combo for when you're short on wA ammo and have beyblades up. Requires you to position yourself so the beyblade in question will be over the opponent when you press b.SPwB; then, as the beyblade retracts, you bridge the hitstun with caltrops so the beyblade hits your opponent again once it flies towards them. Can actually chain into itself multiple times, but is extremely hard to pull off, especially outside of smoke. Follow up with dwA, or SPwA/SPwB if that was your last beyblade, or just back off.

Standard confirm for SP Hyper. Knives add a LOT of damage to this Hyper and make it worth using. Momentum cancelling SPwA's invuln into SP Hyper is a good habit to get into. Be wary of opponents with 1.5 meter; you'll need the meter to cancel into another Hyper in order to avoid being punished by them.

Very good excuse to not use the full melee combo (unless you have knives incoming). Passable confirm if you just need the damage right then and there.

Not so much a combo as it is a 'use it when you see it'. Involves capitalising on an opponent that is smoked or boxed in by smokes by landing Accel; the knives will add more unshieldable damage, making it even stronger.

The 'Meme Combo', aka landing b.B Hyper on your opponent, is well-known amongst some players for its phenomenal burst damage (although it isn't really a combo on its own, per se). At higher levels of play, it'll generally only result in 200-800 damage before your opponent goldshields it, making it an unreliable 2-for-1 trade that might not even succeed. However, if you're interested in getting into your opponent's head or reserving an absolutely brutal punish for a high-heat opponent, you may still find the information below useful.

'Bait Meme'. A gateway to insane amounts of damage in just 22 frames if executed perfectly. In this version of the combo, Mira is very stationary, making it a punish option and nothing else. If your opponent is rushing you down despite having no meter to goldshield with, congratulations on your free damage.

'Slide Meme'. Involves exploiting the momentum carrying from SPwA to throw Mira over the opponent before the combo is unleashed, making it much more aggressive. Best used on a smoked opponent.

Same as above, but with a tornado starter. A tight 3-bar confirm that will result in 6-8k if not goldshielded; basically used to punish a whiffed Accel.

Only viable in smoke; too unreliable otherwise. Involves Beyblade Rush-ing over a smoked opponent and comboing directly into b.B Hyper.