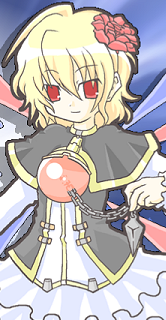 Guardian Goddess of the colony ship most of the characters came to the planet with. She enjoys dancing. For information on how to unlock her, see the FAQ.

Hime is a character that can thrive at any range on the battlefield. Able to snipe people down with her large Passion beam while also being able to cram daggers everywhere to force a chain combo. Hime is unique in that she's able to directly cancel any of her Hypers into another Hyper for big damage.

If you're playing against someone who you never played before start off with Passion, they are probably expecting a ranged move that they can dodge after it has been fired, not a beam like Hime's. That attack is your friend, it will probably be your most accurate attack if you're playing ranged, use Passion when you know your opponent is going to be firing missiles or something similar where they stop moving. Try not to heat up much and learn how to pattern dodge without dashing.

When your opponent gets close you have a few choices, if timed correctly you can use Delicate Pains of Paradise, though I don't suggest that cause its pretty easy to dodge. As a rule I never use Delicate Pains of Paradise without stunning them or if they can't move due to delay. However if you use Violent Air correctly they will form around the incoming player stunning them for a very short moment which then you use Delicate Pains of Paradise. Alternatively if your not confident in your timing just hit Beauty of Needles. They will either veer off or have horrible reaction time and run right into it. If you don't like that either just dash away from them, unless if you're playing against Suguri SP or Kae you're probably faster than they are.

As expressed above, Entrapment is one of Hime's strong points. when you have 2 or more on your special bar dash right next to them and hit them with Entrapment. You can then either play it safe and blast them with Amber or if your confident in your ability to dodge get next to them hit them with Violent Air to stun them and then use Delicate Pains of Paradise followed by Eternal Incandescence for a lot of damage.

Hime's A has an extremely quick dash cancel point and can be used rapidly to build meter and drive up the opponent's heat, while keeping yours low.

Held [A] (the ring) is great for sweeping enemy ballistic off the screen. It's also good for keeping an aggressive melee opponent away from you, because if they dash into the ring they will take massive damage.

Held [B] (the beam) is good for sniping the enemy out of laggy moves from far away, and hitconfirming into a Hyper beam.

Dash A is a general purpose aggressive artillery move. Each shot that is fired will track the opponent, so dashing in close to them will cause the shots to continue to target the opponent individually even if the opponent moves. This is a great move for charging at the opponent with and hitconfirming into the sA chain move.

sA is Hime's general combo move. Chains into itself and then combos into either sB or [B] and/or a Hyper.