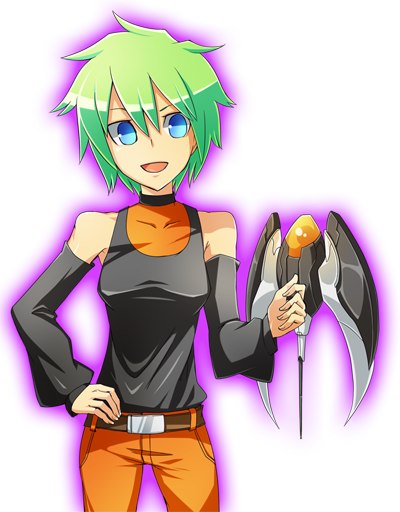 Iru is a neat character with interesting tools. She can lay electric mines to deal with enemies and projectiles, her lasers are decent, and her missiles are unique that the explosions also deal damage instead of just the missile itself. This can be used to an advantage if they explode on an enemy's projectile that they launched late; the explosion will hit them instead!

Iru has a number of ways she can go about a battle, and true to the nature of the game, can switch between any of them without a problem.

Play the distance game. Keep far away from your opponent and try to keep at least a minimum of two electric mines up at all times. Your photon rifle as a punish and missiles as a nuisances will probably be your main source of damage.

If your opponent is heading straight towards you and you can’t hit them then hold down the B button to send an arc of those missiles flying. You can either be aggressive and follow up with a few photon shots and homing missiles or retreat and put some more distance in between you and your opponent. Need some more distance? Throw out those elec bits too they can’t dash through them and will stop most other ballistics.

For punishing, the large laser hyper is probably the best bet, its fast, its wide, it turns, and it slices and dices! Avoid using the Hyper C, It has very niche uses that are overshadowed by the usefulness of all of her other hypers. It can be used to clear out and turn an area into a bad idea to be, but then you might as well have done her Dash Hyper

Iru can also play as an upclose annoyance by keeping her electric mines around the opponent and walling off escape exits. When the opponent gets caught in one, immediately dash up and do [WB] for a good chunk of damage! It's a fun way to play and will surely make your opponent flustered in no time when Iru starts slowly pushing forward with her traps.