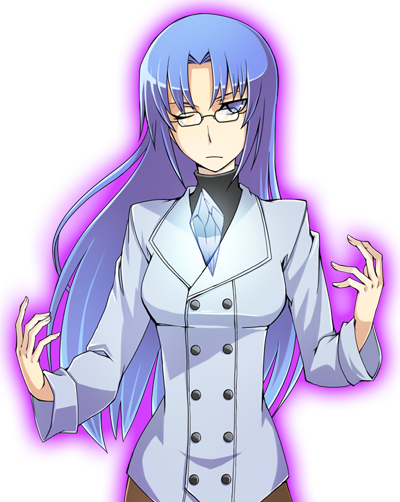 Sort of like the opposite of Kae, Kyoko uses ice-oriented attacks and has a calm, cool personality.

Kyoko's defense is her offense. She can reflect opposing laser projectiles as well as redirect her own. Her ice cubes all have great durability to tank shots and are great combo starters. Unfortunately, she has the slowest speed of the cast and hates being near her opponent without a defense up. Tricky to use, but a fine character.

Kyoko is a setup character. From the reflecting prisms, ice cubes, Water Mirrors, and dash lasers; she needs to have at least two of these tools out at all times to be successful. Clearing is childs play thanks to her Weapon A and dash lasers, able to cut through nearly anything and with the speed upgrade from a reflecting prism, they'll find the opponent easily. When your opponent begins dashing to avoid these, take the opportunity to summon some ice cubes! While the opponent tries to blow them up, resume your dash lasers to put an end to that and persuade them that moving is a good idea.

Kyoko's attacks are pretty easily dodged and Charged. You'll have to place your attacks well to get the hit and take the life lead so that your opponent has to commit to more attacks, therefore continuing to ensure your victory. Be wary of players punishing your cube and crystal summons so be ready to fake the move. If someone is in your face, your best bet is to dash away and throw down Water Mirrors and/or Prisms. Using your regular melee is a poor choice due to its poor tracking, but it can work in a pinch if you really don't have breathing room. Don't be afraid to use your dash super as a reversal!