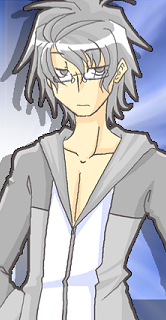 An altered human with some pretty beefy attacks. He resembles an enemy from the original SUGURI... Only available in X-Edition. For information on how to unlock him, see the FAQ. His objective is to make all the girls part of his harem. His win quotes are nonsensical, yet amusing.

No Name's gameplan revolves around putting as much stuff on the screen as possible and then giving them incredibly damaging missiles to deal with. He can be played a variety of ways, but they all revolve around the core concept of forcing a mistake out of your opponent.

No Name is all about making your opponent disoriented, distracted, and dead. With a number of great tools at his disposal to make your opponent move, trap them, or make a bad decision, it's only a matter of time before he hits you with those giant homing missiles.

They seem easy to dodge, but the true thing is the amount of fear they instill in your opponent while having to dodge and deal with droids, pods, and a No Name flying around introducing a robo fist to your jaw. Getting hit by one usually means getting hit by all of them and if your opponent has high heat that's bad news bears and could lead to a touch of death or close to it.

Your dash drones are very good as it summons three at once for the price of sitting still once, just be wary of the heat it heaps upon you. Laser pods are good for sniping and suggesting movement. Use supers to cool down and to create false pathways for your opponent to run into your other attacks and/or missiles. You set the stage, all you need to do is wait until they seal their own fate by making a bad call or forgetting where that missile is as the camera zooms in and out from movement.

After super missiles, you can throw two more from your regular Weapon B Hold. Use your remaining invulnerability time to release them go in a different section of the ring to create two different trajectories for your opponent to keep track of.