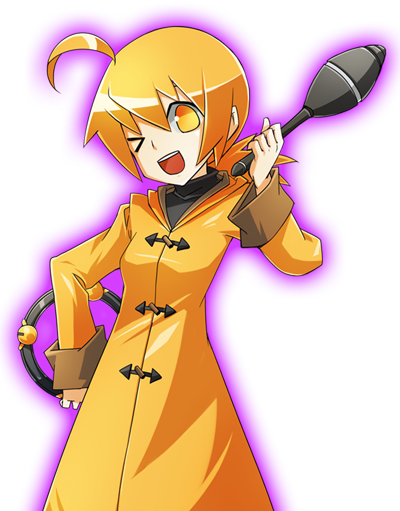 Stage 1 Boss from SUGURI. Her basic playstyle is open to a lot of complexity to adapt and nuke your opponent. She's very fun to play as, whether you're conjuring Dippin'Dots, chucking maracas, or throwing Spirit Bombs, she can always deal with some sort of situation. Saki also has a spacing and timing dependent infinite with her boomerang tambourine.

The foundation with Saki lies with mastering her Dash Attack. Being able to pump out an absurd amount of Stardust Bells is where all of her pressure begins. Try to stay away from her regular A attack. All it does it pretty much give the opponent meter unless you're specifically using it to clear missiles. When you get 2 or so meter, head to the bottom of the screen and chuck a fully charged Spirit Bomb, Dash Attack your way to the top and start chucking maraca shotguns. This basic way of playing should be able to deal with a lot of stuff until you start getting better.

Building on the foundation, you now realize that Saki thrives at the north and south directions of the ring. The more charged your Spirit Bomb is, the slower it moves. This makes it rather easy to dodge, even with the maracas raining down on them. Throw out a second, smaller, faster Spirit Bomb to mess with their rhythm before heading north. While your opponent is being harried by the supers, you can cut off their escape routes with your sA and sB, sA. These are sometimes more reliably than throwing the maracas due to how big the hitboxes are and how responsive they can be. Also while your enemy is being hit by your spirit bomb, you can dash inside and tack on more damage with sB, sA weapon links.

Okay so your opponent dashes past all your Dippin'Dots and chuckles at all the free meter you're giving him. He keeps dodging your maraca showers. None of that stuff above works anymore. Time to pull out the Tambourine Boomerang. This attack cuts off sections of the arena, allows you to drill forward through missiles and even functions as a safety net on its return to prevent melee retaliations. Learning when to throw it straight and when to throw it off kilter by pianoing it straight out of dash is important to getting your other attacks to hit. Using far sA bashes will also help you nail your opponent when they commit to dodging your dash attack. A nice strategy is to use your Dash Super to generate lots of Bells at once and counter your opponent's movement as they react. With a bit of prediction, you can introduce a maraca to your opponent and they'll eat the whole super.

Also, she has a spacing dependent infinite. If you can catch your opponent at the apex of the boomerang, you can dash cancel and quickly throw out another one at the same distance. Lasts until your opponent gets a meter and bursts out or you screw up. But how will you get them to sit still long enough? Call out a bad attack startup or the Spirit Bomb! When your opponent is caught in Spirit Bomb they get knocked around a bit inside. You can toss your boomerang in there, and with a little luck, you'll get the starter.