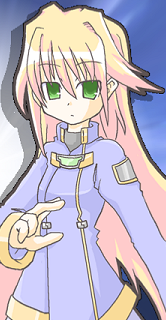 Protagonist of,well,uh... "Sora". Kind of feels like a Suguri clone. If you want to know how to unlock her, please see the FAQ.

Missile and Sword mixups, along with beam rifle pressure.