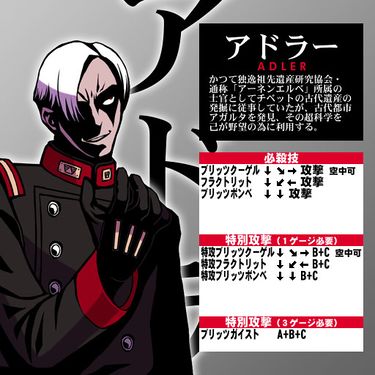 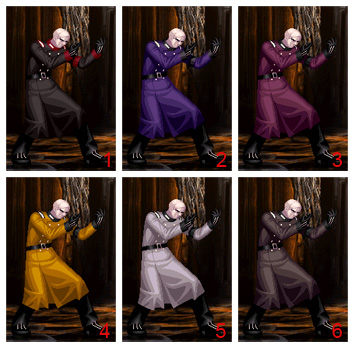 An officer once belonging to a research association on German ancestral inheritance, commonly known as Ahnenerbe, that was involved in the excavation of Tibet's ancient legacy. However, with the discovery of the ancient city of Agartha, he uses that superior science to further his own ambitions. (From character selection screen)

Adler is an officer for the Gesellschaft, as head of the Armed Schutzstaffel: the army of the Ahnenerbe, composed of his clones, the Elektrosoldat. Host of his own Blitz Engine, Adler was guided by the mysterious head of the Perfecti Kyoudan cult to retrieve and understand the unique Blitz Engine hosted within Akatsuki, the officer frozen in the Artic after a failed expedition to protect the Engine. Little does he know, the operation is much well thought than initially assumed.

A more "shoto" - esque alternative to Elektrosoldat, Adler is fairly rushdown oriented with some shorter range and slower versions of many of Soldat's specials. Some of his normals function similarly, but Adler has far more of a high/low mixup game and better damage output in exchange for suffering greatly outside of optimal range. Unsurprisingly, he and Soldat are not far from each other in terms of tiers.

Adler tutorial video. He's also one of the only characters who needs to worry about standing/crouching confirms, as he has BnBs for both. Adler players will need to remain vigilant to succeed as him.

~2500 dmg (~3300 w/ j.C) Harder to confirm and requires a standing opponent. Will still score a knockdown and land you a

~1500/2200 dmg. Even more difficult combo to confirm due to Adler's 2B being a cancellable low that doesn't chain into anything.
Going into 6B won't score a knockdown, but is much safer if blocked.
236A won't score a knockdown either, but will do more damage in exchange for being less safe. 236B won't combo but is safer
214C will knockdown but you'll eat it's blocked. You can reflector if you expect them to mash for a punish, or go for grab to try to throw break a throw punish.

~4200 dmg (~5500 w/super). Most damaging combo with starter, for only one bar. You'll want to go for this against standing opponents when you have the meter.

~4400 dmg (~5550 dmg w/super). Simple, damaging combo against crouchers. Since 214 won't combo properly, use this instead. You'll generally want to cancel into the 236B+C as close to the ground as possible to allow ample time to go for the airthrow.

~4800 dmg. Costs one bar as well, but shorter and just as easy to confirm. You can also go into 236 for an easier confirm and a negligible damage drop. Better combo than the above, but doesn't look as cool.

~1700 damage. Requires a bit of a delay to connect both hits.

~7550 dmg. Crouching variation. Slightly less damage, similar result. For the wait, you'll need to pause for the ball to circle slightly past Adler's leg, as going into the 5A too early will cause the combo to drop, as the ball won't circle around in time.

~7900 dmg. Absolute hardest variation, that doesn't work against some characters (UNTESTED). Generally best to go with the more reliable one above.