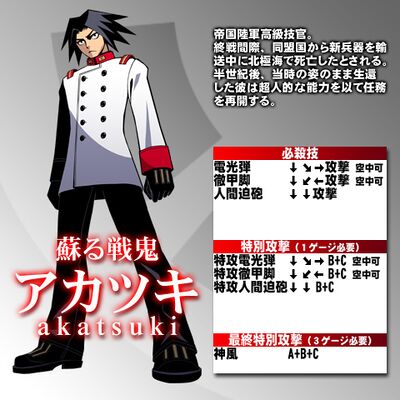 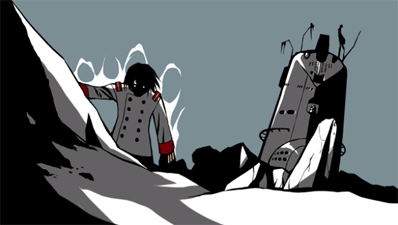 Having survived through half a century by using the Hibernation Control Unit he resumes his mission.

Akatsuki goes south on the continent

but an assassin from the mafia, aiming for the Blitz Motor, awaited him...

Win quote: "But how? The Blitz Motor should be particularly secret..."

[Shang​hai - New Prefecture along the Harbour]

the strongest and most famed assassin from mainland China stood before Akatsuki, blocking his path...

Akatsuki returned to his country. Awaiting him was

a covert operative from the GSO carrying the order to rescind his mission... (*1)

Win quote: "Forgive me... I still have matters to take care of."

After half a century the Cauldron of Hell opens once more... (*2)

Win quote: "I can't believe that they actually escaped..."

Heading to the continent again, Akatsuki is contacted by an agent, Sai.

He was also aiming for the Blitz Motor...

while chanting the name of God, she put her fingers on silver triggers...

Win quote: "So, you are searching for Gesellschaft's base...?"

built their base in one of Asia's most secluded regions after the war...

At the center of Gesellschaft's base

there stood a little girl calling herself Mycale...

Win quote: "This "Final Solution" she talked about, it can't be..."

A forbidden decisive weapon whose development was interrupted at the last stage of the Great War...

Gesellschaft has already restored it to completion.

Win quote: "How could they restore this thing?..."

A huge Blitz Motor was running in the deepest part of the base.

Win quote: "Weakness caused by multifunction... I already saw through it while fighting the guards." 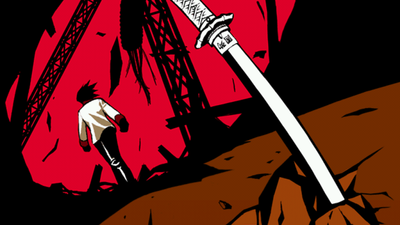 "A human is neither a God nor a machine... This ends here."

Adler is stated to be a Captain from the SS assigned to Ahnenerbe/Gesellschaft.