An armed officer of the Inquisition from the religious society, Holy Club. She is dispatched to destroy Gesellschaft, the organization supporting the heretic Perfecti Cult. She is a master of "Lambuth Style Gun-jutsu" a combination of oriental kempo and pistols. (from character selection screen)

Anonym is a slippery runaway zoner that is limited by her unique bullet meter. Many of her normals shoot bullets, which must be reloaded at some point or you risk running out. She works great at fullscreen and has many good options up close to escape pressure. Since her bullets travel quickly, they can be difficult to parry and blocking bullets rewards Anonym with chip damage and screen space. Managing your bullets is the key to success, and with them, you can keep your opponent constantly guessing.

She has new effects on her bullets and 214X although these are entirely visual.

The backwards shot on 22X now launches, although this changes nothing except Blitztank combos. 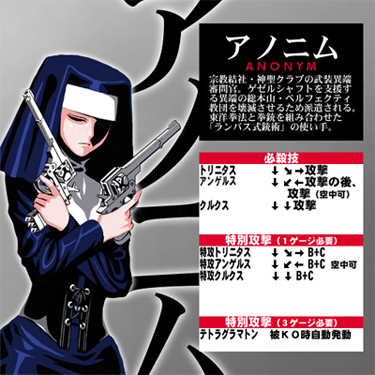 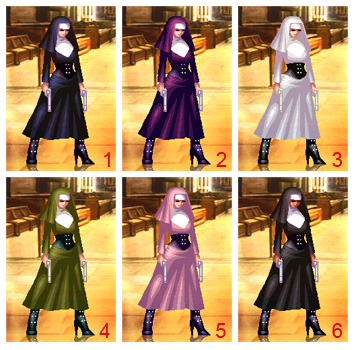 "Through analysis of thousands of recorded gunfights, the Cleric has determined that the geometric distribution of antagonists in any gun battle is a statistically-predictable element. The Gun Kata treats the gun as a total weapon, each fluid position representing a maximum kill zone, inflicting maximum damage on the maximum number of opponents, while keeping the defender clear of the statistically-traditional trajectories of return fire. By the rote mastery of this art, your firing efficiency will rise by no less than 120%. The difference of a 63% increased lethal proficiency makes the master of the Gun Katas an adversary not to be taken lightly." - DuPont

A hit-and-run type of zoner, Anonym wants to play the system mechanics while preventing her opponent from doing the same. Although she lacks any sort of blockstrings up close, her many movement options let her set up throws while, at the same time, playing around the opponent's toolkit and being a scary presence in neutral in general, chip damage on bullets to boot. Anonym not only has to manage her bullet count, but also her position on the screen, as being in the corner for her is a death sentence in a lot of matchups. The 3 bar passive Resurrection is very useful here, giving Anonym a second chance at least once per match.

-Flip over the opponent to travel behind them

-The distance covered is always usually good, but can leave you open to a back attack

-Similar to j2C, although even better when the opponent gets counter hit

-The trajectory is not as forgiving, if the position does not look favorable, opt for j214A to fake out

-Surprisingly a good option as Anonym has some invincibility frames, can pass through fireballs with ease

-Similar to 66, although with more recovery

-If you can string into it, usually a favorable situation due to the sheer amount of knockback

-Not always advised on wakeup, but not a terrible idea either

-Can be painful when parried

Fighting your way out

Self explanatory, but most used normals for this situation are:

Very useful confirm that sees a lot of use, as 4C requires you to be close to your opponent.

Sends your opponent to the other side of the screen, where you want them to be.

A somewhat situational combo requiring 0rds and no EX followups. Damage is on par with (if not better than) many of Anonym's revolver-dependent and meterless combos but involves considerable spacing and may also invite the threat of jump-reflector opposition.

Very hard combo, feels like a one frame link. Gets the most damage for rounds used.

Not so much a combo as it is a setup for the airthrow.

Reflector combo that uses bullets. Does a bit more damage. 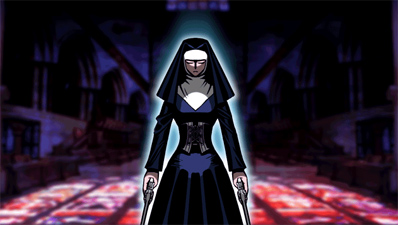