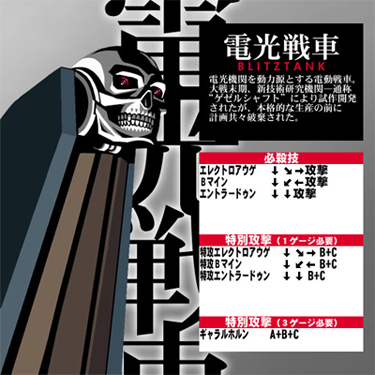 An electric tank powered by a Blitz Motor. At the last stage of the Great War, the military technical reasearch institute, commonly known as Gesellschaft, developed a prototype but it was discarded together with the project before full-scale production. (from character selection screen)

Read the translation of its arcade mode!

The character you show players who don't care much about the mechanics, but think Blitztank is cool. Somehow not the worst character in the game.

5/6A+B: Throws the opponent away a full screen. You won't be able to get out a mine before they wakeup, but they won't be able to jump out of it if you time it properly. Will put them in the corner if you're close enough, but will also put Blitztank closer.

4/6+A+B: Throws the opponent a full screen away behind Blitztank instead. Pretty much just regular throw but backwards.

j.4/5/6+A+B: Throws the opponent towards the corner that Blitztank is facing. Pushes tank back about 1/3rd the screen afterwards. Timing for mine followup is even worse than regular throw.

Keep in mind that Blitztank's throw range is comparable to everybody else's, meaning that you're not going to land a grab unless the opponent is sitting about halfway between your front treads. How Blitztank grabs anything without opening its jaw is beyond the scope of this wiki. 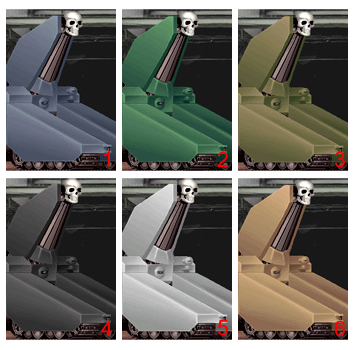 66: Blitztank's dash does damage and knocks down. Essentially a moving sweep. Unsafe.

5A: A quick gunshot. Essentially a projectile jab, so it doesn't trigger Reflector autocounter.

5B: A 3-hit flamethrower shot, similar in function to jab. Reaches about half-screen.

5C: Tank charges and does a skullbutt while traveling forward. Overhead, Knocks down.

2A: Single poke at the shins that self-cancels. Decent option for mashing in pressure, but too slow for getting out of it. Not a low.

2B: Two-hit low attack that cancels into specials/supers from either hit. Your general, go to combo starter for Blitztank's near nonexistent combo game.

2C: Sweep with a long windup. Unsafe as hell but doesn't push Blitztank far forward like his forward dash.

j.A: A multi-hit gunshot. Decent air-to-air. Puts the oppponent in an unrecoverable state, meaning you can combo afterwards. Knocks down otherwise. Projectile; doesn't trigger Reflector's autocounter. Not an overhead.

j.B: A skullbutt similar to 5B, also knocks down grounded opponents. Doesn't activate until Blitztank is near the ground, regardless of when you pressed the button.

j.C: Tank freezes in midair and then falls straight down, delivering damage. One can freeze him just a few inches above the ground. Knocks down. Nice delayed overhead option for reflector happy opponents, but it's fodder for AAs and airthrows.

j.6C: A heavy (though not very distant) gunshot, aimed diagonally down and forward. Knocks down. Recoil also pushes Blitztank back.

Ｂマイン - B-Mine - 214+A/B/C: Tank crouches and shoots an electric charge from his back, that explodes in midair.

特攻Ｂマイン - EX B-Mine - 214+B+C: Shoots 4 charges, that instantly cover most of the screen. Pretty useless outside of extensive combos.

特攻エントラードゥン - EX Entladung - 22+B+C: More hits and damage, range remains the same. You'd think this would be a reversal but according to the frame data it's not.

ギャラルホルン - Gjallarhorn - A+B+C Tank opens up and shoots a huge horizontal laser beam close to the ground, though it can reach jumping opponents as well. Your biggest damage option, like most Level 3s.

Despite expecting a ridiculous character, Blitztank is actually a pretty by-the-book keepaway fortress. You want to harrass opponents from far away with lasers and Tank's ranged normals, on top of using Blitz Mines for oki after every knockdown, if possible. Save your meter for knockdowns, especially if you get to level 3 and want to combo into it.

Tank actually has heavy armor similar to super armor when doing anything, but unlike super armor, it does not reduce the damage he takes. It also only absorbs one hit per string, meaning that if the opponent chains into another move, from the hit that gets absorbed, tank will take the full damage from that move and get put in hitstun this time. It can be good for getting grabs, but don't be stupid with it.

Also this character is a joke go play somebody better.

Jump in combos. Won't happen too often because j.A's not an overhead, but if the opponent's asleep then do it.

Knocks down further away from Blitztank, allowing for better ranged oki setups.

Linking from the j.A can be difficult due to the landing recovery on all of Tank's air normals.

Knocks down, does decent damage for meter, but the hits from j.A can vary and may scale the A+B+C too hard. Most of these j.A combos are situational gimmicks. 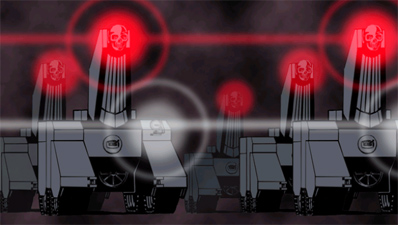