There is an English version of the config.exe file. It makes configuring the game easier. Not all menus are available in English, unfortunately.

(literally: Rule of the Three-way Deadlock) 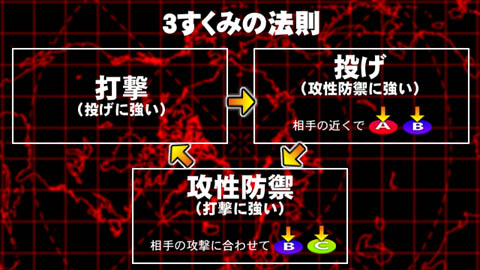 All characters in Blitzkampf have these three things: normal moves of varying strengths (A, B, C), a throw, and a parry. The San Sukumi System indicates the rock-paper-scissors nature of the three. The relatively generalized idea of this 'system' is that: normal moves can be stopped by parrying, parrying can be halted by throwing, and throwing can be stuffed by normal moves. All three things can be executed either on the ground or in the air.

Normals: Characters have three varying strengths for normals: Weak, Medium, and Strong. Some normals are cancelable and can chain into each other, but a specific chain route is assigned to each character. The usual hierarchy for a normal chain goes from Weak -> Medium -> Strong. Cancelable normals can also be canceled into special moves.

Throws: Throwing will break through blocking opponents. Holding a direction while inputting the throw command will allow the character to throw his/her opponent in the specified direction.

Parrying: Parrying allows the character to guard an attack without taking any damage and gives them a slight advantage. The general idea is for the player to read the opponent's next attack, parry it, and follow up accordingly. Upon a successful parry, the player will automatically follow up with an additional attack that can be canceled into another attack. If the parried attack was projectile based, the additional attack becomes omitted.

Recovery Roll (press Any button when hitting the ground after being knocked down): Also known as Tech. Allows the player to quickly recover by rolling away from his or her opponent, thus avoiding possible OTG hits. It can't be done after every knockdown though.

Throw Break (press 4/5/6+A+B when caught in opponent's throw): Requires strict timing and often happens unintentionally, when both players attempt a throw. Upon successful throw break both characters are knocked away from each other. This can happen both on the ground or in the air. One important thing to note about ground throw breaking is that you have to be standing while inputting the throw command in order to break it. You will not be able to break the opponent's throw while crouching.

Counter hit: A typical result of player's hit countering opponent's attack (by hitting in its startup or attack frames). In Blitzkampf it also gives a 25% damage bonus.

Back Attack: A special occurance of crossup. Happens when player hits the opponent while the latter (and his/her sprite) is facing away. In Blitzkampf this gives a 50% damage bonus.