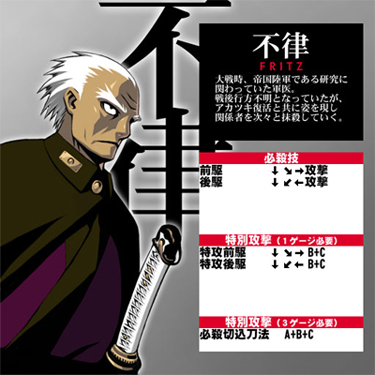 A military surgeon who was involved in a research from the Imperial Army during the Great War. Although he was missing after the war, he reappears with Akatsuki's comeback and starts to eliminate those involved one by one. (from character selection screen) 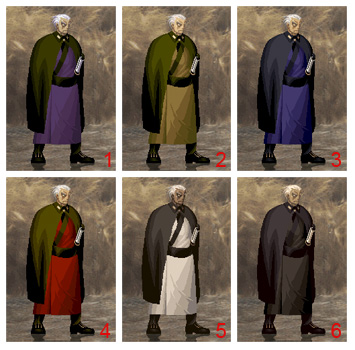 Fritz is the kind of character for those who like to trick their opponents into making mistakes and then come down on their heads with brutal punishment. Fritz forces his opponents to think hard and play carefully, unless they want to lose a good chunk of their health in a matter of seconds and 3 bloody slashes.

On the other hand, Fritz is forced to parry and/or use EX dashes in order to get out of extreme pressure (especially when cornered), simply because he's out of options as his attempts at countering will prove futile.

4/5/6+A+B: Fritz performs a quick headbutt to the opponent. This throw is techable but the opponent remains relatively close to Fritz.

j.4/5/6+A+B: Fritz slams the opponent into the ground using his knees and hops away. This throw is untechable.

Fritz is about patience and controlling space with his outstanding range and somewhat interesting speed. You have to outsmart your opponents with Fritz because most of his moves have considerable startup. His combos are very few, but very powerful.

Here are some of his useful attacks:
7/9B: Your aerial anti-air. This move is very good at keeping your opponent grounded - even if they manage to parry it, you are completely safe because of jumping backwards.
5C: The move's a juggernaut, but, naturally, not as safe as you would like it to be, thanks to a very noticeable startup where Fritz is walking forward then attacking. Use this move sparingly.
4C: A tad better than 5C, and mixing them togehter tends to mess with your opponent's parry timing. And it's also safer.
2B: Can be used to punish whiffed pokes, and don't forget to follow it up into ever so useful 2C.
2C: Very quick low, and sometimes people forget just how fast this move actually is. Taking advantage of its range is highly recommended. 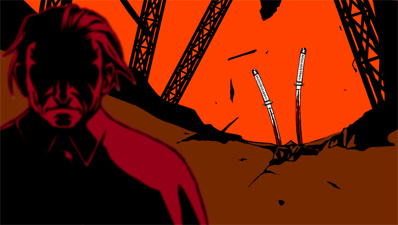