This section contains definitions of terms that are commonly used in gameplay discussions.

This is a direct translation from the official ABK site taken from the section Words which details the meaning of various terms used throughout the games. The bullet points below each give further explanation if needed.

The year is 266X AD in the Japanese national calendar [1]. It corresponds to 200X AD in the Gregorian calendar [2].

During the Great War, submarines were used to carry out Japanese-German technology exchange. Before the outbreak of the war the "Indian Ocean - Cape of Good Hope" route was used, but during the closing years of the Great War navigation was near impossible.

The technology used to control metabolism and lower body temperature. It also improves the immune system.

Codename originated from "Akatsuki Unit" which was the alias of an Imperial Army naval force.

"The Shipping Command Unit (Senpaku Shireibu Tai) was an organization of the Imperial Japanese Army that supervised the transportation of troops, goods, etc. during the war. It was assigned the Unit Character Name: "Akatsuki Unit". More popularly know as "Akatsuki"."
The Imperial Japanese Army gave codenames, based on a guideline called Tsūshōgō [5], that assigned a character (kanji) and a number for each unit. In this case 暁 meaning dawn, daybreak.

Its real meaning being closer to "Society". It originates from "German asociation for the spiritual inheritance of protohistoric ancestors" to be commonly referred to as "Ahnenerbe".

An unregistered illegitimate child not declared for being born outside the one-child policy.

Taking advantage of Hong Kong handover to mainland China, the local mafia expanded into the continent. The origin of the name comes from its assassins black gloves. It's unrelated to the Serbian Black Hand Society. [7]

License given to the strongest agents authorizing homicide. 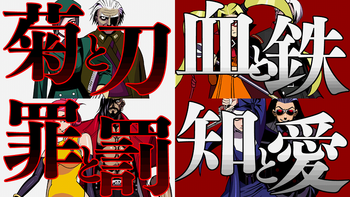 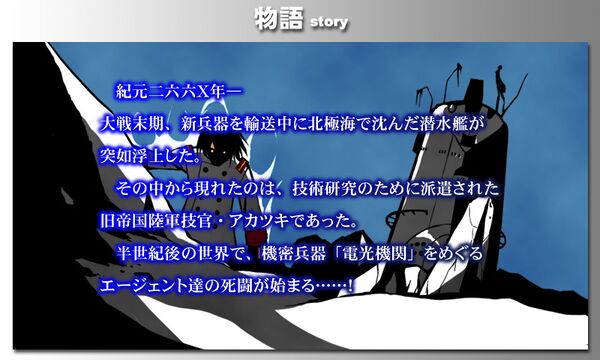 Due to the WWII themes of Akatsuki Blitzkampf and its sequel, En-Eins Perfektewelt, some of the game's villains (Elektrosoldat, Adler, and Murakumo) are associated with the Nazi party.

Akatsuki Blitzkampf in no way tries to glorify these themes or characters and there is nothing hateful in the game.

The story of ABK can be somewhat convoluted and has many misconceptions, so this summary was made to give a basic understanding of the plot by following Akatsuki's arcade story. This skips out on details such as the Black Hand, Perfecti, the origins of the Blitz Motor, and the clones, so for further details read the individual translations of arcade stories on character pages.

Near the end of World War II, a prototype version of a secret weapon that could change the tide of the war was being transported from Germany to Japan in a submarine. Aboard this submarine were several Imperial Japanese soldiers, including technical officer Akatsuki (Akatsuki being a codename, real name is unknown). However, the submarine was sabotaged, and it sank in the Arctic Ocean. Over half a century later, the submarine resurfaced. Thanks to the Hibernation Control Unit, Akatsuki had survived each year without aging. He now resumes his mission; in case of mission failure (transporting the Blitz Motor), destroy all Blitz Motors. Wielding the prototype Blitz Motor, Akatsuki heads into the continent.

Akatsuki starts his journey heading further south in Asia, eventually ending up in the Shanghai harbour. Here he has encounters with members of the Black Hand mafia (Marilyn and Wei), but he fights his way through them and continues. He then gets a ship to Japan and travels across the nation, heading towards his old military research facility in an attempt to find his old commanders. The facility is abandoned, and waiting for him there is Kanae. With the authority of the modern Japanese government, Kanae orders Akatsuki to lay down his weapons and follow their orders. Akatsuki refuses, as his mission must be completed no matter what. In return, Kanae attempts to forcefully bring him back, but Akatsuki beats her in battle and continues forward.

Traveling further across Japan not knowing where to find his commanders, Akatsuki finally encounters a familiar face in Fujigane; Fritz, a military surgeon involved in the same research. Fritz states he is glad to see Akatsuki is in good health before giving him critical information. Fritz tells him that not only have his commanding officers survived, but now have a base at Tsangpo Canyon, Tibet. With this information, Akatsuki heads back to the continent.

Entering Hong Kong along the way, Akatsuki is contacted by an MI6 agent who attempts to take the Blitz Motor, but manages to quickly stop him. Also in Hong Kong, Akatsuki encounters a gun nun of the Holy Club, who too attempts to take out Akatsuki but is stopped. Finally, Akatsuki arrives in Nepal, at the Gesselschaft base.

The secret society Gesselschaft, a former Third Reich research institution, had built their base in a secluded place after the war. Entering into the base, Akatsuki is confronted by a pair of guards (Elektrosoldat), both with Blitz Motors of their own. Akatsuki is able to make swift work of them, but their commanding officer and someone Akatsuki is familiar with, Adler, comes out as soon as they are defeated. Recognizing Akatsuki, Adler states that he should've been dead. They then begin to fight, and after a tough battle, Akatsuki emerges on top. Realizing that the Elektrosoldats each having a Blitz Motor is dangerous, Akatsuki begins to hurry as he enters the base.

Going through the base (and presumably fighting Elektrosoldats along the way), Akatsuki reaches its center, where a little girl calling herself Mycale stood. After a brief battle, Mycale mentions a "Final Solution"; the Gesselschaft's plot to purge the population of the weak to solve overpopulation and create a stronger human race. Heading deeper into the base, Akatsuki enters the Gesselschaft's weapons factory. After the sound of an alarm, a forbidden weapon whose development had originally been banned emerged. The Blitztank, now completed by the Gesselschaft; a tank that uses a dead soldier as a battery for an especially powerful Blitz Motor. After another tough battle, Akatsuki destroys it and expresses disgust that they would restore the project.

Akatsuki finally enters the deepest part of the base. There, a huge Blitz Motor was running, along with a man waiting for him. Akatsuki's commanding officer, the Akatsuki Zero and now leader of the Gesselschaft stood alone. He reveals to Akatsuki that he had purposely picked the Arctic Route for the submarine since it meant certain death, and his order to destroy all Blitz Motors in case of mission failure was only given since he expected no one to survive. Murakumo then gloats about the power of his newer, enhanced Blitz Motor. With the power of it and the army he's created, he intends to take over the world and rule in a new world order, declaring himself a living god. In spite of this, Akatsuki rushes forward to fight him. After a grueling battle, Akatsuki manages to knock Murakumo to the floor. Murakumo, astonished at his defeat wonders why. Akatsuki explains that since the Blitz Motor is powered by ATP (basically just think life force but more scientific), the newer models were putting too much stress on his body, causing him to be weakened, something he had noticed while fighting the Elektrosoldats and Adler. Akatsuki's prototype model on the other hand didn't have this flaw, allowing him to win the fight. Murakumo then cries out that he's overcome death itself, but Akatsuki simply states that god is neither a man or machine, and ends Murakumo's life.

Afterwards, Akatsuki causes a cave-in onto the base, destroying it and everything inside. Multiple research teams were sent to uncover what was beneath the rocks but nothing was found. Akatsuki sets off, his mission still incomplete; destroy all Blitz Motors no matter what, so no one can misuse them ever again.