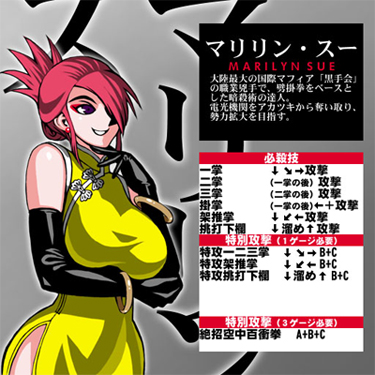 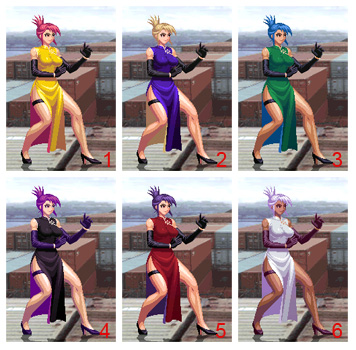 A professional assassin from mainland China's largest international mafia, the Black Hand. She is a master of assassination techniques based on Pī​guà​quán. She intends increase her influence by taking Akatsuki's Blitz Motor. (from character selection screen)

Universally considered one of the very best characters in the game (and most likely being the best), Marilyn is a melee specialist who likes to beat others up close and personal utilizing her easy conversion, superior damage, speed, multi-hitting moves, untechable ground throw, mix-ups, cross-up and guessing game, as well as having an easy time as corner carry. Having said that, she feels comfortable in defence too, thanks to her, again, easy conversion, great reflector combos, good anti-airs, special move with an autoguard and access to "flash kick" move.

However, lacking projectile and having short ranged normals, she has harder time against characters with better neutral and those who have good options for stopping\escaping her corner pressure. Also, since Mari's "flash kick" has no complete invul except in EX-version, her wakeup options against proper meaties are weak.

Marilyn is a rushdown type and needs to be very careful in neutral. She if very fun and has ton of options to choose from, and not really that hard to play once you learn her, but the latter can be a long process, so she can be considered an advanced\high skill character, especially if you want to play Mari the most optimal way. What's especially great, that is most of Marilyn's follow-ups and combos are very consistent at any range while retaining high damage both with meter or meterless, even reflector ones. While she has some pretty hard ones, you can swap them with easy and almost optimal versions for the time being or for some situations when you want to be almost 100% sure in not dropping your follow-up or combo. Also, her strings and moves in overall are pretty universal in use, with all being useful one way or another, so everything you learn in midscreen follow-ups\combos will be familiar in the corner and in neutral game too.

Marilyn Tutorial video for 1.1.3.1 SP1. This video alone can make you a good Marilyn player.

Please see "Moves" section for elaborated information about usefulness of each of her moves. Know Marilyn's moveset very well since she has no useless moves.

Don't forget that Mari is the only character in the game who can wall jump. This is done by jumping to the wall at any height and then pressing forward (4 or 6), depending on which direction you are facing (i.e. press right when jumping to the left wall and left when jumping to the right wall). You can hold\press any other direction too, it will not mess with 4\6 input. Wall jump while Marilyn descends to the ground is also possible, but only after normal jump, nothing else. Maximum amount of travelling distance from wall jump is a bit more than half of the current screen. This is very useful property for your mobility and great tool to get out of the corner, you can dodge some nasty stuff like Soldat's\Adler's EX fireballs too, but your opponent may try to punish it, so be careful. You can combine it with j.2C\j.2[C] shenanigans too. Showcase. Also, Marilyn's wall jump has glitch which is hard to do, but it can push your opponent out of the corner and gives you some dirty opportunities (hey, that's unsporting), please see 5:30 in Marilyn Tutorial video.

Despite having great offence, against characters who can't force you to come in (non-zoners or the ones with easily reflectable projectiles) you can freely rotate between rushdown and more defensive play, since Marilyn's easy conversion allows to make huge damage almost from anything (including reflectors), when one careful hit can lead to a combo with Level 3 ender which will pretty much delete opponent's healthbar. You don't really need to commit to unsafe stuff and trades.

Ctrekoz's Marilyn online matches playlist. Back then, in the first 4 matches against Fritz, I didn't knew some of the tech that I learned while rewriting this page (most notably 2nd corner BnB), but it's still a good showcase of how Marilyn is played, and also lets you to look at Fritz's matchup.

This section is not 100% completed

Counter hit damage in reflector combos is stated only because you will get CH off them really often, so those values are more indicative. Combos itself are legitimate both with and without CH, since the latter gives you only 25% damage buff to the move that provoked CH.

Leaves your opponent in the corner even if you started it in your own. Second and third hits in the first rekka must be done really fast, otherwise opponent may lose hitstun and react to any of them.

The essential parts of this combo is 236 rekkas, and you may use as starter literally any non-command normal except 2C. If you use jump attacks, remember to link them after landing. Due to speed, range and animation, 5B works really great as starter when you can just 236BBB after first, second or both hits without fear of dropping the combo, and although 2B may serve the same purpose, it's harder to do due to its animation. You can even not use any starter at all and catch them with raw rekkas (and it will give the most damage).

Mind your range and choose starters\chains appropriately, remember what was said about hitstun and pushback in "Moves" section.

Level 3 will confirm only if done close enough to the corner. If you feel that your second rekka will not leave you close enough for it to confirm into Level 3, and you really need this confirm, then you can do so after the first rekka guaranteed.

Same deal as above, but first hit in the second rekka is replaced with B-only version. Hilariously deals just 23~\23~\20~ less damage. Is used when you think that you are too close to the corner for 236CBB to land.

Is used when you are close enough to the corner to juggle an opponent with 2A after the first rekka. Essentially, after the 236BBB you just do the second half of either corner BnB 1 (first combo) or BnB 2 (second combo). Same deal as with corner BnBs: the first does a bit less damage but is more consistent, while the second one does more but is harder to land. Anyway, either of those deals the most damage out of any other rekka BnBs. You can juggle them with 5A instead of 2A for even more damage, but it's very inconsistent due to how short that normal is.

If you see that using all hits in the first rekka will not juggle your opponent as needed, i.e. you will do it too close to the corner and wallslam will be too low to confirm 2A\5A off it, use 4+B after the first hit of rekka (as shown in Overhead starter combos below).

About all rekka-BnBs: sometimes you want to delay your hits in rekkas a bit to not raise your opponent too high so you won't miss with 214+B+C.

After 5C, don't use 2A, since 5B then will be too far to land the first hit and may be reacted to, use 2B>5B chain instead.

Only two hits of [2]8+C will land even without supers.

Raw Air Throw combos without close reflector are the same. [2]8+C will often land only 2 hits instead of 3, I can't understand yet what causes it.

To do the first combo, you must input 214C immediately after reflect, and Level 3 ender seems impossible(?) even with 214A instead of 214B due to how high opponent happens to be. You can't be too close to the opponent before doing reflect if you do not want 214C to miss.

The second combo is less restricting. The first 214A can be done closer and with more delay, but the second 214A will land only if you were close enough to the bottom of the screen or to the corner. 214+B+C always needs some delay because of reflector auto-attack juggle, and it can be hard to confirm properly. Level 3 will confirm only if done close enough to the corner.

The funny thing about those two combos is that in 1 the first part is inconsistent, while in 2 inconsistent one is the second part, so it's hard to recommend only one of them. Well, the first one deals more damage, but you cannot confirm Level 3 off it. Rotate judging by situation.

The first combo is very easy, corner carry and almost optimal in terms of damage. Highly recommended. If you were high in the air when doing the reflector, input 5B immediately, and if you were close to the ground, then delay it a bit for the second hit of 5B to land. Unlike rekka-BnBs, 236CBB will always work no matter how close it's done to the corner due to amount of juggle from 5B. If done from your own corner, delay 214+B+C for all hits to land. Level 3 will confirm only if done close enough to the corner.

[2]8+B+C ender in the second combo is very inconsistent since it often will land not each hit, and deals less damage than EX enders in the first and third group. Anyway, you will want to use this combo only if you want to safely confirm your air reflector into Level 3, because for the first combo you may be too far from the corner to do that, and the third group of combos is hard.

The third group of combos is the most damaging one, but is not corner carry and [2]8+C is hard to land, so you will use it only if you want the max damage and don't care about consistency.

Air Throw can be throw-teched.

Very easy and consistent combo with almost optimal damage, perfect for more casual Marilyn players, high delay matches or when you don't want to risk dropping BnB 2. In 4+B->2A->2B part, wait for the opponent to fall a bit before doing 2A, otherwise only one hit of 2B will land. 5B will always land one hit. Also, in 4+B->2A->2B part you can use 5A instead of 2A, which will give 23~\22~\19~ more damage, but it's a harder link to do and not much worth it. Depending on the starter, 5A can add even more damage, but it's still not that much. Using 5A, seems like 5B can land both hits, which will add a lot of damage, but it's damn hard.

Similar to midscreen rekka BnBs, the core move in this combo is 236B>4+B, and before it you may put anything you like. The most optimal starters in terms of damage are 5C (you will do this very often) or j.C (more rare) into 2AAA and so on.

The most damaging corner combo, but is harder than the first. Still, this is the most optimal one in terms of damage, and ultimately you should aim to consistently land it. 5C, j.C and any other starters still apply. In 2A->6B you can do 5A instead of 2A, but it's a harder link in already hard enough combo.

Moving forward in 1 is required to catch the opponent with 6B, but most importantly, with 2A and for 5B to land both hits.

2 and 3 are very hard and I didn't bothered enough to successfully perform them. I wonder how much my easier, 1 version, is different in terms of damage.

We have optimal combo 1 which is really inconsistent (Air Throw and 2B parts), and the only easy option which is close to optimal that I've found is 2 where we lose 300-350~ damage.

2A will land only if you were close enough to the corner before doing an Air Throw. Otherwise, remove 2A and use 2B, although it's a much harder link, but, sadly, 2A will not land most of the time. 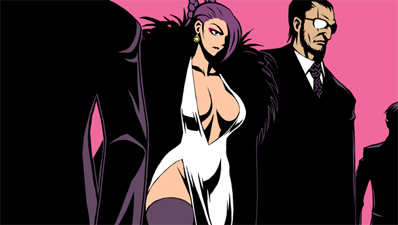