A military officer stationed in Germany who planned and implemented a German military affairs delegation during the previous Great War. During his tenure, he made contact with the religious society Perfecti Cult and established a military technical research institute commonly known as "Gesellschaft." In the last stage of the war contact with Berlin was lost. (from character selection screen)

The man with the funny walk who wants to become God. Murakumo is no joke though. In classic boss character fashion, he has a tool for nearly every situation.

In short, Murakumo is a boss character with little to no bad matchups because of his versatility. He has a fireball for every situation, and his mixups put every other character in Blitzkampf to shame. If you handle this character well in neutral, your opponent will become scared of any move you make. His teleports are incredibly useful movement abilities, and also double as good mixup tools. Murakumo may not get amazing damage or corner carry, but he has a couple tools that let him overcome his damage problems. Combos into EX flash kick deal great damage, and mines, while serving as a good pressure tool, also lead to his most damaging combos in the corner.

None of these changes were especially important to Murakumo, though losing access to high damage reflector combos with [2]8EX hurts.

Murakumo has a taunt now! It deals extremely minimal damage and is mostly useless but...

5B was changed to a long range kick with the same frame data. This is an incredible poke and pressure tool.

2B has a new animation and slightly lower range. Sadly, this reduces its usage to primarily blockstring fodder.

j.B has a new animation as well, but the usage is the same. Maintains its cross-up hitbox and decent jump in properties.

Non-EX mines will disappear instantly if Murakumo is hit. Does NOT apply to EX mines, so you can still be a scumbag for 1 bar. This nerf requires a bit of a gameplan change, since you can't rely on 22A/B/C to bail you out of everything anymore. 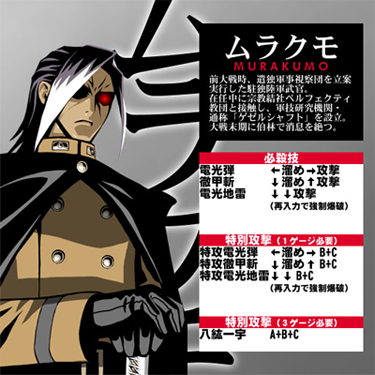 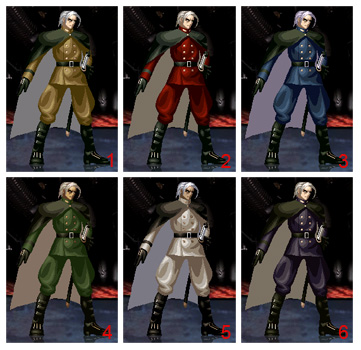 One of Murakumo's main gimmicks are his illusions. Think of Hibiki from Blazblue Centralfiction, though not as fleshed out.

For most matchups, neutral is where Murakumo thrives. He can choose to play defensively with mines and fireballs, or go full rushdown with teleports and his borderline unfair walk speed. Switching between these playstyles is important to maintain momentum while being extremely unpredictable.

For defensive zoning, mines become an important tool to prevent people from rushing you down as they stay active even if you take damage (non-EX mines disappear if you take damage in the arcade version, so be careful there). For opponents who are fullscreen or jump happy, defensive mine + [4]6C is an almost unbeatable combination. When a jumping opponent learns to parry [4]6C, you can punish with an air throw or air to air with j.A. Since whiffing B and C normals build meter, whiffing 5B -> [4]6X will net you a little bit of extra meter on top of keeping you in place and throwing out extra hitboxes.

[2]8A -> [2]8BC is an amazing tool to counter approaches with only 5 frames of startup, and leads to major damage. You can almost play Murakumo like Electrosoldat with his flashkick, though be careful of jumping parries.

For offensive play in neutral, jumping and teleports become Murakumo's most important rushdown tools. Here is a quick rundown on when each of Murakumo's teleports is most useful.

66 (Dash Teleport): Great for gaining distance or closing the gap, but generally not better than walking forward. Occasionally leads into ideal scramble situations where you teleport behind your opponent and their button whiffs.

j.2A: Forms the basis for half of Murakumo's teleport crossups with the 8X upwards kick follow up you can perform after j.2A/B. Goes straight down, so it usually won't cross up and is sometimes a good option for baiting parry.

j.2B: The second half of the teleport crossups. Use this when your teleport will put you behind your opponent so you can instantly cross them up with the 8X follow up.

j.2C: Easily the best teleport. Inputting j.2C will let you perform an air action afterwards, which can become borderline instant overheads that lead into full combos. Use this if your opponent is trying to play defensively, or when your spacing creates an ambiguous crossup.

Because you can block in the air, jumping is an incredible option. It is almost completely safe and Murakumo has some solid air buttons to back it up. j.A has little recovery so you can jump upwards, j.A, and still have air time to do another jumping attack or even a teleport. One strangely effective application for this is jumping forward in neutral, hitting j.A j.B/C, then immediately jumping back and doing the same thing. This builds meter while also throwing out hitboxes for your opponent to somehow run into.

This round demonstrates this strategy in practice.

Outside of those options, Murakumo can make good use of his walkspeed to approach with a fireball to cover him and following C fireball with a jump cheats neutral entirely. If you're a really good gambler, throwing out C normals is also not a terrible idea.

If your opponent starts parrying your mixups, delay your attacks or throw. This pattern becomes Murakumo's most common scenario.

After Murakumo gets in, he has a couple general pressure options. Stagger pressure or throw. Murakumo's basic blockstring is 2A x n -> 5/B2B. 2A can stagger into itself, and 5B/2B staggers from 2A. Common blockstring enders after 5B/2B include [4]6X to reset pressure, 5C for a riskier pressure reset and overhead mixup, and 4C for reflector happy opponents.

If your opponent starts blocking too much or parries your stagger pressure once you're in, abuse your walk speed and throw them. It is important you go for a mixup early in your pressure or you leave yourself vulnerable to parries.

After landing a combo, your opponent will be hit by one of the following enders which lead to different okizeme flowcharts.

2C knockdown: This ender leads to the best okizeme you can get midscreen. With a tight link and a deep meaty, you can combo 5C into 5/2A for looping setplay. In the corner you can safely set a mine as well.

[2]8X knockdown: This knockdown isn't amazing, but you are able to meaty by walking up or jumping in. Higher damage especially when dumping meter, but generally less preferred than 2C.

Throw knockdown: Unfortunately the worst knockdown situation midscreen. You can walk up and 2B for a meaty, but this is very tight and one-dimensional. Generally advised to set a mine and switch to a zoning style afterwards unless in the corner.

Air combo > 2B > mine set (corner exclusive): The best corner oki you can get, but only off situational combos that require meter or a mine launcher combo. The mine gives you insurance on anything you want to do, see below for more info.

This is where Murakumo really shines. If you get a single knockdown in the corner with mine oki, you can effectively keep your opponent locked down there until the mine expires. There are very few ways to escape the corner that beat mine lockdown (to cover ground options) and C fireball (to cover aerial options). If you are content with taking the meter + chip damage, your opponent will start to crack under the pressure.

If you would rather make use of the mine, you can go for a blockstring and detonate the mine at the end to give you a ton of plus frames. This gives you an opportunity to land a fancy mine launcher corner combo (detailed in the combos section), but leads into tick throw/mixup opportunity if blocked.

If you're in a sticky situation, either midscreen or in the corner, Murakumo has few options to escape. His best button to mash during blockstrings is 5A, but that becomes vulnerable to stagger pressure, which everyone in this game has. Murakumo needs to spend meter for any kind of invincibility on wakeup, and even that becomes risky since every one of his reversals is minus on block. If you HAVE to push buttons on the defensive, parry is the safest option.

However in the vast majority of situations, blocking will be your best bet.

Good netplay match compilation that details all the techniques here.

Japanese Murakumo Wiki (Also has a section for Ausf Achse)

2A x 2 -> 2B is approximately the time it takes to charge a special move, use this ground string if you are not already holding down back when your combo begins.

2C can be replaced with [2]8A -> BC/ABC for EX flashkick and Level 3 enders respectively, so make sure to charge down and back for these enders.

Without teching, [4]6A will OTG for a combo extension. If they tech, [4]6A will just meaty.

Not so much a combo as it is a setup for the airthrow. If you leave out the air throw, it can also cross under in certain situations!

Meterless combos without mine detonations are the same as midscreen

The damage route. Forfeits mine oki for more damage and potential to burn another bar on [2]8BC for even more damage.

The oki route. Mine will OTG if not teched, leading to a bit of extra damage and an extra mine set.

These next combos assume you have either 22B or 22C mines set in the corner. 2A scaling is almost minimal on these combos, so feel free to use as many as needed to hitconfirm.

Optimal meterless mine corner combo. Watch the video if you're having trouble with timing.

Note: Can also route into mine oki similar to the no mine corner combos for less damage, but another chance at landing one of these sick combos.

Murakumo's highest damage combo. Requires corner, mine setplay, and 3 bars. Pop off if you land this in a set.

Murakumo's routes don't change in Ausf Achse, even for reflector combos. Though reflector combos deal less damage across the board now, so spending meter on them is discouraged.

Murakumo's C teleport has an exploit where after teleporting and performing an air action, he is able to teleport again leading to what you see here. 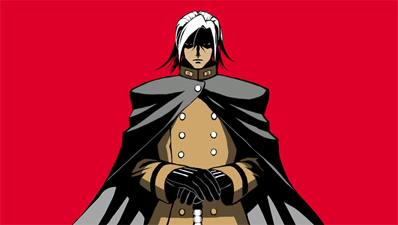