Disclaimer: Perfecti is in the arcade release only!

She is the founder of the heretic Perfecti Cult and the current commander of Gesellschaft. She has been repeatedly reincarnating since the Middle Ages, operating from the shadows in order to fulfill the cult's dearest wish. (from character selection screen)

Perfecti is a zoner somewhat similar to Mycale, but has some key differences. Perfecti has great normals, possibly even the best normals in the game. Moves like f.5B are big, do good damage, and are cancelable. She also has strong projectiles that are fast and cover good angles, which combined with her normals, make her great at keeping the opponent out. She also has strong setplay with 214+X and thanks to her humongous j.C, she has an instant overhead on the entire cast although it won't lead to anything without a setup.

However, she has plenty of weaknesses. She has among the worst movement and defense in the game, making it hard for her to pressure opponents as well as escape pressure. She also has weak defensive options, since her fastest buttons are stubby and don't lead to much and she doesn't have strong reversals. She also can't deal much damage outside of situational combos and, similar to Mycale, has a high skill floor.

Overall, she has the best zoning and neutral in the game, and is very hard for some characters to properly deal with. 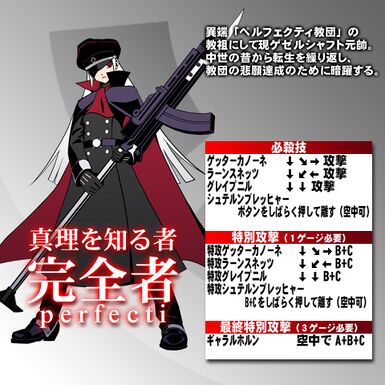 Sternbrecher, the negative edge laser, is your best neutral tool in combination with your missiles. Generally you want to be charging using the C button at all times except when you need a specific C normal (instant overheads for example).

Here are some restrictions you have when charging using specific buttons.

A: Lose your fastest normals, grounded fireball, fastest missiles, and you cannot throw.

B: Lose your best pokes, best neutral fireball, and you cannot parry or throw.

Sternbrecher has a few levels of charge, with the level 2 and 3 charges being the most important. All versions are great at baiting full screen parries where your opponent may try to parry a fireball, deal great chip damage, and have good pushback.

You should almost always be charging this move, but keep in mind there are certain situations where you may wish to throw away your charge to regain access to reflector as your main defensive tool.

Perfecti does her best work at fullscreen where your options can contest your opponent's approach. Right from round start, your goal is to get a knockdown and run away to zone with oppressive fireball, missile, and laser pressure.

A gameplan flowchart should look something like this: get a knockdown -> charge C laser -> set A/B missiles -> either meaty with a projectile to get chip damage and space or bait a reflector for more damage and space.

Depending on how your opponent likes to approach, you will need to use different tools to handle them. For example, a jump heavy opponent can easily jump over your laser angle, but will have a lot of trouble with 236B/C, Perfecti's great air to air combos, and 5A/2B all of which are good options against air approaches.

Play around with your wide range of zoning tools to create unique timing patterns that make it almost impossible to approach.

Perfecti close range mixup situations mostly boil down to stagger pressure and strike/throw situations. She has no standing overhead options, but occasionally j.C can be an extremely potent instant overhead on the entire cast.

For stagger pressure, 2A is the only button you need since after cancelling into a B normal you will almost always cancel into a fireball. This part of her kit isn't amazing, but functional enough to let you beat mashers and throw people who respect you too much.

Though not getting many opportunities to use it, Perfecti has amazing corner pressure with missiles. After knockdowns in the corner, you can set a 214A missile and run looping strike/throw mix until you guess wrong. Alternatively for meter, you can set 214EX which leads into combos from instant overhead j.C. These combos are extremely damaging and are a real mixup option your opponent has to respect. See the combos section below for more information.

Perfecti's walk speed is abhorrent, so you will be making good use of your good aerial options to move around and stay slippery. Her air normals are great with j.A being an air to air that combos into j.B, which is an amazing air to air as well. j.C is your best jump in, but if you are charging a laser, j.B can be just as good. If opponents start trying to parry your anti airs, her air throw is great as well. Gives you back some health, deals respectable damage, and gives you full screen distance.

The most unique part of her air kit is the j.2X series of divekicks, the heavier the button, the more horizontal of an angle you get. They all hit mid and are generally safe on block, but lead to very unique situations with regards to missile setplay and reflector baiting.

j.2A when done at certain angles will whiff entirely but lets you recover quick enough to grab a parry, when backed up by missiles this can be especially powerful.

j.B has similar functions to both A and C versions, but is really only used at certain spacings to create ambiguous mixups where A and C versions would whiff or cross up.

j.2C goes the furthest, which lets you escape the corner easily, and sometimes allows for missiles to cross up.

Defense is easily the weakest part of a dedicated zoner's toolkit, where Perfecti is no exception. Abare with 5A/2A is fine, but generally unadvised in a game where everyone has access to great stagger pressure. With meter you can use 236EX which is invincible, but can be avoided easily making it a linear option with only niche use. Overall your best bet is to block or parry. Even though reflector combos were nerfed across the board in Ausf. Achse (now featuring rollback netcode!), Perfecti has access to surprisingly good damage with reflector combos into 22B.

Overall Perfecti is a good dedicated zoner who is able to play around the main system mechanic (reflector) in multiple ways to her advantage. Use your wide arrange of zoning options to keep your opponent out, and be patient when they get in.

Perfecti is considered to be less powerful than most of the cast, but still is a perfectly viable character. Since Ausf. Achse was only recently made playable online, Perfecti is a largely undeveloped and underplayed character.

There are many things that may be found in the future to her benefit, so if you want a zoner with a multitude of setups and options Perfecti is for you.

Main combo. Gets knockdown and is safe from most ranges so it doesn't need to be confirmed, but does barely any damage.

Meter midscreen combo. Easy combo for big damage, but expensive. EX Sternbrecher can be replaced with a meterless Sternbrecher or f.5C but for a lot less damage.

High damage one bar combo. You need to start charging Sternbrecher when you do 22+B+C. For slightly more damage, you can replace Dash > Delay 5A > f.5B with j.B > f.5B, but you need to be close to the opponent and land 236B.

Basic air to air level 3 combo. Easy to hit confirm and does a lot of damage but you won't get many opportunities to do this.

Basic meterless corner combo. Does ok damage but it's better to spend meter if you get an opportunity to do a 236C corner combo.

1 bar corner combo. Does a bit more damage than the meterless version, but can be a little tight to land.

1 bar corner combo with 236B. Only does a bit less damage and is safer to go for. Also will get crouching opponents.

Harder 1 bar 236B combo. It can be pretty tight especially if you want to add on the last f.5C, but it does slightly more damage than the alternative.

Very high damage meter combo. Deals great damage especially if EX Sternbrecher is added but is very tight and requires good execution. Also is of course situational due to it requiring 236C and you have to be charging A prior to the combo.

Basic long distance guard break combo that leads to good damage. Can be hard to get since you have a tight window to charge.

Higher damage long distance guard break combo. Not really worth the meter unless it will kill.

Corner level 3 combo. Very situational since it requires a standing opponent and for you to be incredibly close, as well as being really tight, but does great damage.

Alternative corner level 3 combo, pretty much a guard break only combo but does higher damage than the alternative. You can get it if you get an oki 214A and your opponent tries to throw tech, but that's fairly rare.

Basic meterless reflector combo. Very simple but is often your only option.

Hard reflector combo that gives a good knockdown situation. Don't do it if you want to stay zoning, but it's generally recommended.

Mildly advanced reflector combo that does pretty good damage and is consistent. 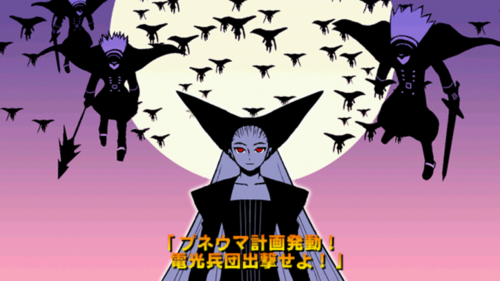 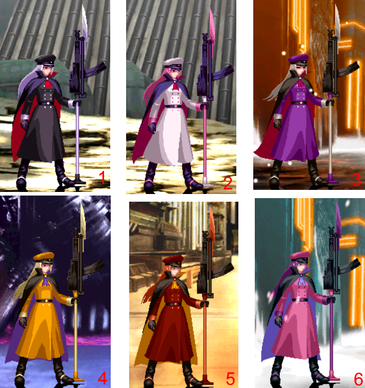