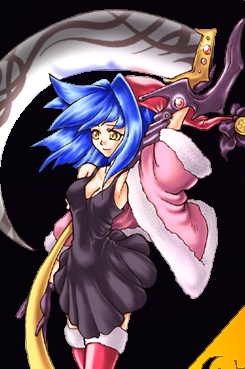 Normals are cancellable into dashing normals, try taking advantage of this by poking and starting blockstrings with 66B. This opens up for a myriad of mixups, pressure resets and frametraps that can catch the opponent off guard, or you can do 66A instead to start stagger pressure (examples of blockstrings will be shown below). Your fireballs are not as much used to zone, and more to stop zoning or covering your approach, A version being slow, B being fast with a Light Break window right after the fireball goes out but slow recovery otherwise, and C being multihit but not very useful in general. Use your jB to sneak behind your opponent and hit them with a powerful crossup normal, bait antiairs with your air fireballs that stall your air momentum, TKj236A for a fast, horizontal and + on block special, TKj236B for an instant overhead with low recovery that can be used as an antiair, rush in with your + on block dashing normals (66A or 66B) or use 236B B+C. Your main goal in neutral is to force your opponent to block and open them up from there.

Her airdash and install make her a very unique character among the roster. Her install opens Light Break windows (similar to False Roman Cancels in Guilty Gear) on specials that normally don't have it, most notably her 236/j236 series and makes them totally free, which allows for hard yet rewarding blockstrings and mixups.

The whole point is to threat with the potential of pressure resetting because you can't block this character forever. This is complemented with frametraps to discourage escaping options. The way gatlings work is:

At any point EXCEPT after a command normal you can cancel into a dashing normal, the idea is to not necessarily get too far into the chain so it's more ambiguous when the + frames are coming. Stating this, your main + on block dashing normal is 66A which looks just like 5A and frametraps into 2A, 5A, 5B or 6A. The other option (which is also prefered in long range) is 66B, a 2 hit dash normal that has a jump cancel on either hit or block and you can cancel it into 6C which is an overhead. The amount of options after 66B allows for a good amount of layers:

...66B (2) Instant airdash jB (frametrap, and depending on spacing the jB can be crossup)

...66B (2) Instant airdash jA(A)B (single, double or triple overhead if the character is tall enough, this is airtight)

...66B (1 or 2) 6C or B+C 2A (gives layers to the mixup, sadly the 6C needs 1 meter to confirm it, this isn't too bad if the opponent knows this since both options recquire meter, making it less telegraphed)

As you can tell, there are many options, these are just the main ones, there are others that have more niche utility, but this should give you an idea of how strong her pressure can be.

Her pressure changes completely when install is on, 236A Light Break strings can guard break easily while chipping away the opponent's health bar by a noticeable amount. you can also 2A or j236B Light Break at any point during these strings, turning her into even more of a mixup monster during full 15 seconds. My tip for 236A Light Break pressure: Alice Senki II's input interpreter prioritizes light buttons over heavier ones, which means that 236A~B+C can be a bit easier if you do 236A+B+C~A+B+C instead.

...66C Wait for wallbounce delay instant airdash jC (for no sideswitch and more damage, but harder)

...236B (ends combo, good when you have no meter or you only have 1 bar so you'd rather setup the install)

-You can get another pickup after every ender with 5B but you lose oki, and every move that gives long hitstun (66C, 63214C, 236B(2)) only give that much hitstun once per combo.

-Combo structure depends on how close you are and how much meter you have.

-Try doing the pickup after 66C as low to the ground as possible so j63214C hits three times.

-Install lets you add some more damage thanks to 236A Light Break, but I'll add those later since it still needs some experimenting.