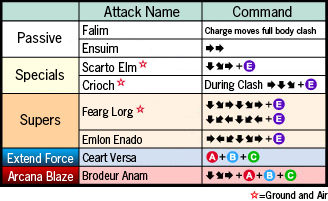 There was once a queen revered as the Goddess of War who became a higher existence, Bhanri. She has the power to control lightning freely. As long as Saki remains proud and noble, she will lend her powers to her free of charge.

Falim - This trait is probably the main reason why people choose this Arcana. When charging your E moves they will have full body clash frames attached to them from frame 1. This property is great for being aggressive with your opponent, but it's pretty easy to accidentally whiff a max-charged E move and be left in the recovery of it because your opponent read you and moved out of the way.

Ensuim - This is another great passive trait. This will add clash to frames 1 to 5 of your forward step (66). This takes a lot of risk out of using your step to poke, throw, or use Crioch. You can often use this to neutral throw your opponent so that you can go for a Fearg Lorg setup.

Ceart Versa - Adds clash to everything. Yes, everything, even your block animation. You can easily murder people that don't know that holding [4] during your EF will cause clash during this. You can even clash projectiles with this. If you block someone using Flower's Multilayered Crimson Nivara (236236E)... the screen might cause seizures.

E
This will drop a bolt of lightning right where your opponent is currently standing. Usable in the air. Good zoning tool, but the start-up is on the slow side (40F). Due to its slow start-up, it is best to use this high in the air or on the other side of the screen.

E [During clash]
This move will emit a flash of lightning from your character straight forward. You can use this in the air too. This move can only be done after a clash. Other than that, the damage is good, it is fairly quick (12F) and has full body invincibility during the start up. It's basically a clash-exclusive shoryuken. Great move, but just like any other DP, if the opponent guards it you are going to get punished.

E
This is the super version of Scarto Elm. Three bolts of lightning will drop from the sky, starting from where the opponent was when the super flash occured and continuing in the direction that was used (back for 214214E, forward for 236236E). You can use this in the air too. You can delay the activation of the move by holding the button, although it will eventually go off on its own. Also, while holding the lightning, if you get hit by or guard an attack, you'll end up wasting the move. This move is great for mixups and okizeme.

E
Generates pillars of lightning around your character. You won't be using this move very often, but it has good start-up and does fair amounts of damage so it does have its uses.

Brodeur Anam - Bhanri launches herself high into the air then comes down on the opponent after a bit. This is air unblockable and ground bounces the opponent. The start up is very slow for this and if you get hit before it comes back down, it will invalidate the move. As a result, there isn't much reason to use this.