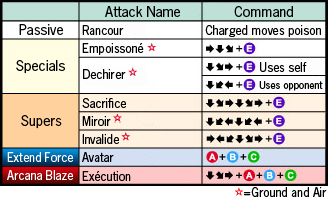 Dieu Mort was once a man sentenced to be executed. While he was alive he was called the God of Death. Upon dying, his soul lived on as the Arcana of Evil. In exchange for Yoriko's magical powers, Dieu Mort condemns his opponents to death using whatever underhanded methods he can think of.

Rancour - E moves charged to the max will poison the opponent, gradually draining their life. Poison status lasts for 330 frames. It will also end if you take damage while the opponent is poisoned.

Avatar - During EF, all normals will poison the opponent. This is probably the reason why most people choose this arcana. As each hit poisons the opponent and continues to eat away at your opponents life, naturally, the base damage for your EFC combos goes much higher.

E
This move sends out a poison fog on the ground in front of you, usable in the air as well (still sprouting from the ground). If the opponent touches this they will be poisoned. The start up is a little slow (45F) but you can hit opponents in an OTG state with this.

E
This move will open a hole underneath your opponent. If they touch it while it is out, they'll be sucked into it then fall from above. The hole is unblockable and they cannot tech after they are spit out. It's not actually a grab so you can incorporate it in your combos. You may want to use it for unblockable setups or just getting in on defensive opponents, but it really shines as a counter option. Normally the recovery on this move makes it impossible to combo a falling opponent, but if you are hit after the hole has been summoned, you are free to do as you please. The damage is negligible and the startup is very long, so aim to be hit out of this as much as possible without eating a full combo.

E
With this, you can forcefully change places with your opponent; also usable in air. This move will always work, no matter how far your opponent is or what they are doing (tech, burst, invincible). This will also preserve your opponent's momentum so you could use it for combos as well. Casting Miroir on a floored/downed opponent will not switch positions with the opponent still in a downed state but instead will force them into a standing, neutral position upon reappearance. Also, if you were to cast Miroir while the opponent was in heavy guard stun they would not reappear in a guarding state. Instead the target will appear in a neutral state much like casting on a floored/downed opponent. You can use this for many different things, such as forcing an opponent that is trying to run away back into the corner or extend a combo off something that caused a horizontal launch. For specific examples, you could use this to stop Yoriko from using Ancient Talisman, forcefully strip Weiss of her sword equip, or force Catherine's Chibi Yodogawa to explode. This move is probably the other reason why people would choose Evil.

E
A giant skull appears behind the opponent, smiles, and grabs them. This is 3+0F, so the opponent cannot jump out of it after the superflash. This doesn't do much damage, but it will absorb a moderate amount of their Arcana bar including the maximum amount, about a fourth of one bar. Even if the opponent has no meter, it will take some of their max.

Exécution - Dieu Mort extends his arm out, grabbing the opponent to drag them to hell and slash them apart with his scythe. The first hit looks purely like a grab, but it is a catch grab, so it will only grab the opponent if they are in hit stun or not blocking for whatever reason. After grabbing the opponent, you can control the scythe up and down to hit the opponent, and your opponent can do the same to dodge it. If you match yourself with the opponent before Dieu Mort attacks, you'll get the hit. The move does moderate damage for an Arcana Blaze, but there is no combo prorate for it so it will always do 8000 damage. Usually this is done to attempt to finish the opponent off from an EFC combo; combined with the poison from the hits, your combo could do tremendous damage.