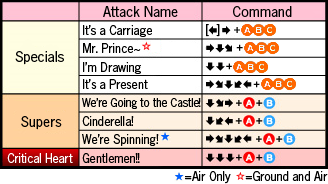 Fitted with moves that hit multiple times and stop or change momentum, Eko is definitely one of the more unorthodox yet simple characters in Arcana Heart 3. Players that might like Eko want a character that can rushdown and stack up huge damage upon getting a hit.

1 - Homing Approach
As you may have heard, JE is very good for this. Approaching from the front, JE. Coming from above, JE. When passing overhead, JE for that crossup hit. Air-to air, JE will help you get in. It's active for ever, hits 6 times and all hits are overhead.

2 - Neutral Spacing
Due to the nature of Eko's moves, what you do at neutral depends more on how your opponent is trying to approach you. In response to a whiffed move on the ground, you could use 2C to slide in and punish. Against incoming opponents, threatening with a J8 JE isn't a bad idea. JC out extra early isn't too bad either. When you have a free moment use "I'm drawing" to help zone, the sun is particularly useful when playing defensively or stripping options from your opponent.

3 - Hit Confirms
On the ground, a 2B hit can easily be confirmed into an EF combo. When out the force gauge isn't full, confirm straight "It's a carriage" or, "W're going to the castle." In the air JE will combo into JE after a jump or homing cancel. End the combo with It's a Prince for the knock down. If you tag your opponent with JE while moving towards the ground, you can jump back up to complete your combo with JA JE then It's a Prince for the knock down.

4 - Defense
Cinderella has a lot on invincibility and is hard to punish. It hits behind her, starts up fast and it does a good amount of damage as well. It is quite good as a reversal. It's a Prince also works for opponents mindlessly hovering in front of you.

Most choices in arcana for Eko are to help her generate more damage off her rush down and random hits.

Fire
The Fire Arcana can help turn random hits into really big damage. Fireballs are also good for zoning, as it covers a vector that Eko is not natively strong with and they cannot reflect it.

Time
Time EF combos on the ground give Eko a good bit of time to land extra hits and take okizeme. The damage and mixups themselves are not particularly strong, but your opponent will be forced to block for long periods time. So the time arcana is great for post combo rushdown.

Tone
Eko can very easily take advantage of Tone's canons in EF mode with all of her multihitting normals, giving her very damaging EF combos.

Triple ballz scoops them up after the wallslam