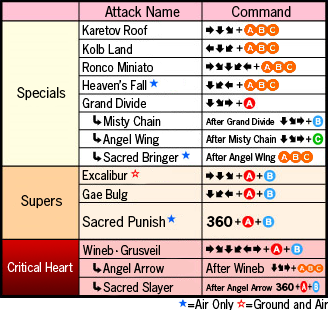 The giant sword and boots aren't for nothing. Fiona may be on the slower side, but she hits like a tank. Players that are interesting in Fiona like spacing dependent characters with big normals and damage.

1 - Homing Approach
JC is great for homing towards a grounded opponent. It's huge and you can make it cross up at will. Try to have it come out over your opponents head for ambiguous left/right mix ups on almost every homing approach. It is also easy to combo off of. However because of its speed you need to throw it out somewhat early. In exchange, it has a great hitbox and clash frames to help get in on your opponent. When your opponent is trying to home towards you, JB is good when the are a bit further out. It comes out much faster than JC and has great horizontal range. Any Fiona worth his salt will use all of these moves and mix it up with JE on occasionally.

2 - Neutral Spacing
Not only are most of Fiona's moves slow, they also put her at a disadvantage on block. You need to be careful when spacing with Fiona. Luckily she has 5B and 2B. 5B is good for your ground spacing and pressure and 2B's hitbox makes for a decent anti air. The best part is that both of these are jump cancellable on hit or block. You can use this to erase your frame disadvantage and stay on your man. These two moves are important towards Fiona's spacing, but make sure you do not whiff. They still have a large amount of recovery if you only hit air.

3 - Hit Confirms
It's very easy to confirm from from a homing JC. JC floats grounded opponents and can be picked up without meter with a rejump JB (then the rest of your combo). On the ground, confirm B and C hits to Ronco Miniato or Gae Bulg if you have the meter.

4 - Defense
2B will be your main tool for poking out. It has clash in its start up and good range. Unfortunately its weak against lows and moves coming from straight above. Fiona has no true reversals, but she has moves with armor properties. Excalibur and 5[C] could help you against unsuspecting opponents. Kolb Land could also help you; it works well against opponents above you and it is unclashable. It is important to take a well assessed gamble when using these. They have huge amounts of recovery and could put you in more trouble than it's worth. 4GC into Heavens fall is good when trying to escape air unblockables. 6GCs on the ground into 5A or throw is the best she has. A saver tactic would be to try to HJGuard after 6GCs and try to reestablish neutral.

To be honest, picking an arcana for Fiona is hard. You don't get many chances to incorporate Arcana's into combos and shes rather slow to bring zoning tools alive. Many choices in arcana for Fiona prioritize increasing meter quickly, fast force gauge recovery and an overall buff of her defense. In other words, maintaining the status quo.

Love
Love has decent health and good force gauge recovery. Unfortunately, Love's specials don't come too much in handy for Fiona. Choose this when you are unfamiliar with the other arcanas.

Thunder
Thunder step and charge E attacks can help you to play more aggressively and negate attacks from Fiona bad angles. If you have the meter you could use clash to confirm into Wineb.

Time
Time does not do good things with Fiona's health. Also, do not burst with this arcana unless you absolutely must. Nevertheless she does get a couple of set ups with Time and you can use the increased time to cheese out Fiona's overhead 6B. Time's backdash can also help Fiona deal with pressure.

Fire
Gouten Shou can be a good reversal for Fiona and will help you tag extra damage on your opponents. Unfortunately, the explosion from the EF effects make fire hard to use for EF combos.

Wind
The wind arcana greatly helps Fiona with her spacing. It gives her extra movement options to really put the hurt on with JC. 6GC will also help you get out of bad situations so you don't have to depend on Fiona risky "reversals." You'll end up loosing some health, but you can focus your force gauge on bursts and gain more options to help keep you out of trouble.

Sacred
You use a lot of life but JB to Holy Voice is a super easy confirm for Sacred Fiona. You can also use Phanlax as okizeme after a Heaven's fall.

Ice
Like the fire arcana, you get a great reversal move, Sprengi for tough situations. Ice step can also help move you around the stage quickly like the Wind. With that you can take advantage of 2B to space your opponent. After a JE or Heaven's fall ender, you can use Kurdi for okizeme.

Sin
Sin's defense is good and you get meter for the self damage moves. This works out rather well for Fiona as she already has high defense. Super sin-balls after Heaven's fall is also great for okizeme and low-maintenance zoning against your opponent

Halo
It's hard to quickly increase your arcana gauge with Halo since you'll be using Celestial Gate for everything (reversals, combo enders, etc). Photon and Imperial Division are great moves for pressure during EF... so do not burst with this arcana either.

Tone
Ef combos with Tone can lead to huge damage for Fiona. Just like with Fire and Ice, Tone's Vivo can be used for reversals, but it and Accentus are only really good with extra canon's around.

Flower
Remember how you're not supposed to burst with most of the other arcana's above? Forget that for Flower. Make sure to take advantage of Flowers super quick burst recharge speed to get you out of a Jam. The fact that Flower also nullifies counter hits for you takes a huge amount of risk out of Fiona's neutral spacing. Multilayered Crimson Nirvana is also great for post knockdown mixup or forcing your onto your opponent. Flower definitely helps Fiona maintain her status quo and is a great choice of arcana for her.

You can use JE instead of Heaven's Fall at the end of the combo. In fact, you should on some characters.

Good combo for taking okizeme after. You cannot do this with the earth arcana. For okizeme, cross up JC or meaty 2X is good.

Kolb Land combos. If you don't have your Force gauge, you could homing cancel instead.

Overhead into a combo. Best to go into 2C after the 2A.

Another overhead combo. You can use specific Arcana supers instead of Gae Bulg.

Sacred Bringer combo. You can use Sacred Punish instead of it Bringer. The [step] 5C is for father confirms.

Link Grand Divide into 5B. Cut out the JA depending on your distance from the opponent.

Misty chain linked into Kolb Land C. You can only do this with your back right up against the wall

Joke combo for the most part, a combo into and out of love ball. You can use Ronco instead of Karetov for long confirms.