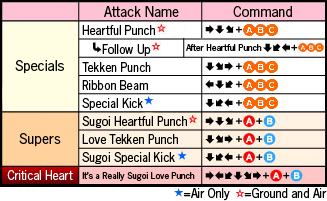 Love always prevails, even if you must beat it into people. The fighting ginger named Aino Heart is back! Heart is user friendly for beginners and has a lot of good tools for advanced players as well. She goes well with a number of Arcanas and probably has the best meterless damage potential in the game.

1 - Homing Approach
JA is a good all purpose tool for Heart. The hitbox is compact but is has great start up, one of the best in the game. Not only does her knee have a hitbox, but her entire raised arm as well. It's great for opponents above and below you and even hits crossup at the right angles. JC has a great hitbox in the angle Heart punches and has clash frames in its start up. You could use it to directly challenge anti airs with the right timing. JE hits cross up from almost any angle and is good when approaching opponents directly below you or near the corner.

2 - Neutral Spacing
6C is a dependable anti air. It has fast start up with clash frames and a good hitbox. This will be your main force against your opponents NHs while you are on the ground. For the air, J4B is a great weapon. It clashes while active and has the most reach out of Heart's aerial arsenal. It works well particularly well with 4D.

3 - Hit Confirms
Many random confirms with Heart will be off a low JX JC into 5A 6C, then require a jump into JA JB JC or an EF combo. When pressuring opponents downwards in the air, force them to block JE as you are landing then 6C for the guard break. If they try to 4GC away, step into 6C for the air unblockable into your combo.

4 - Defense
Besides a good 2A for poking out, she has a great DP. Super fast start up, air unblockable, not clashable and has full body invincibility. Combined with the AH3 system you have a great DP that is safe on block, provided you have 1 arcana bar or a full force gauge. Her 5A is also one of the better ones in the game. You can use it to clash jump ins, then anti air with 6C or DP.

Love
Lucky for Heart, her own arcana works quite well for her. Love will give you fire from your hands to supplement your upward flying fist motion. Triple/single love balls provide her with a great zoning tool. Love beams are also great for long range sniping. On hit, she can easily homing cancel in and generate big easy damage.

Thunder
Heart has a great series of E attacks. They are the fastest in the game and have decent range. You can take full advantage of this fact with the Thunder arcana to force clash situations with half charged E moves. Thunder step can also help Heart play much more aggressively.

Gingers have no damage ; ;

Any damage listed is love heart vs. love heart with 2A 2B 2C starters where '~2C' indicates

When in trouble, dial Love Tekken. This will wallslam the opponent so get used to having to deal with what may happen next.

Basic dial super for overhead hits too far for you to combo from.

Basic homing combo. This combo leaves you in front of the enemy as they wake up. Omit the 「JA」 and finish with J623C~214C instead to be behind them.

Combo begun from air normals. Do not use the 「2A」 unless you started with JA instead of JB.

Alternate variant. Does 60~ less damage but a bit easier to land.

IAD combo. This combo covers a ton of distance and generally corners the opponent- which is prone to causing your final JE to whiff so drop the JB and/or JC out of JB JC JE if against the wall.

Basic combo off of 2E launcher. You have a free homing on your way down- use it! Otherwise, j.214B on the way down will cross up, j.214A will hit them in front, and j.214C will generally whiff for a low attempt.

Meterless corner combo. Cannot begin with an air move. 236B really blows the opponent away, but if you are near the corner, you can pick it up with 5A.

Meterless variant of above with a air normal starter.

Corner combo that can begin from an air to ground, such as JB.

Combo off a clash to 5A anti air. Delay the 「JA JC」 and 「JA JB JC」 parts so that the opponent can't tech and you can stably finish the combo.

An EF combo. To make the 「JE JB JE JB」 a bit less painful, let the opponent float as a high as possible from the 「5B 6C」. You don't need to be right next to the opponent for the 2C to the step, but you don't always get to hit it in place where you're comfortable with... in other words this combo needs practice.

EF combo with a JE ender. This looks a lot like the above combo, but it gets easier and easier to tech out of the end of it, so when you want to end with JE knockdown, this combo is a good example on how to shorten the combo for it.