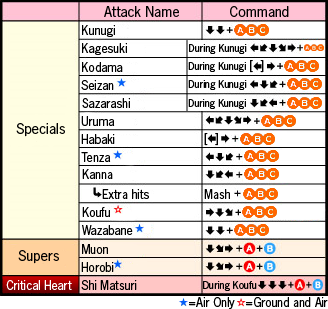 Every franchise needs a school girl with a sword. Kamui is a solid spacing character with a diverse set of specials. She's a good character for anyone to start out with in Arcana Heart 3.

1 - Homing Approach
Most of Kamui's aerial arsenal has good reach, but JB is the best for basic neutral homing. When moving over the opponents head or when you have them against the corner, use JE for ambiguous cross ups.

2 - Neutral Spacing
5B and 5C are great spacing moves. Long reach and decent start up that combo into each other and Muon from almost any range.

3 - Hit Confirms
You could always just confirm into super, but to get more bang from your meter if you learn how to combo in and out of Uruma.

4 - Defense
Kamui's counters are not fit for reversals, but can be used against unsuspecting opponents every now and then. Most of of the time you'll need to rely on good blocks and GCs. 4GC into Tenza can help get you out of a pressure and punish low attacks at the same time.

Time
Time has several set ups that allow you to use Kunugi safely and run strong mixups afterward. Unfortunately, you cannot burst when you feel like with Time and Kamui's stamina is already low enough.

Dark
Dark can give you relatively strong mixups. After a JE ender, you can use Sichel or Martern for some pretty mean left right mixups. If you succeed, you knocking them back down into the same thing again. If they block it, you maintain your momentum.

Wind
Wind is another good arcana for Kamui. It gives you some projectiles to work with and the pushblock to take the risk out of escaping pressure. Wind's triple jump also helps increase the damage off many different confirms.

Kamui has normals that have great reach and thus can lead to easy confirms (BC Super). On the offense,try to fish for hits, and combo appropriately. Keep in mind when poking, her normals do extend her hitbox so don't throw out normals mindlessly. Also know that Kamui is a good spacing character in herself, but she has nowhere near the reach of characters like Scharlachrot, Nazuna, and Clarice. Use the right Arcana to help with this situation. If you ever end up getting pressured, learn to block and not hit 2A, as Kamui's 2A isn't that great for mashing out of pressure. Also know when to GC or not.

As for air approach, Kamui has a better time hitting away from the opponent as opposed to attacking head on.

If your opponent is blocking you have several options. Since her 5B can be jump canceled on block, this can lead to her mixup options. 5B IAD into j.C/E or 421A/22C is a double overhead mixup. If you can condition your opponent to expect 5B, dash or IAD in. Also you can home in after a jump canceled 5B. On the ground, the A and C versions of [4]6 gives you some frame advantage to continue some pressure. 5C seems relatively unsafe on block but if you wish to continue pressure after its blocked and you are pushed too far, you can go to 41236A to retain position. Also keep in mind EFC cancels, if the 41236 hits on block, EFC cancel to 5B and go from there. Beware of your mixup though, 5B 5C can be GC bait.

The Arcana you use can also help for Kamui's pressure. Time gives you 5B (5C) 6HC crossup 5B to whatever. Tyr can give you frame advantage with 623E after 5B (5C), as does Plant's 236E. Gier can use 236E and the Super version for continued pressure.

Also try your best to combo into hard knockdown to take advantage of mixup or power-up with 22A/B/C.

May not link if you are not up in datASS

These combos may not work with the Earth Arcana, but they will work with any other Arcana. With the Time Arcana, the timing may be different.
The first few hits are usually flexible. In general, you can replace 2C with 5C for more damage, but 5C might push the opponent too far for 41236C to combo. Starting the combo with 2A will significantly reduce the damage, and it will also allow the opponent to tech a little earlier (replace 2C with 1E to mitigate this).
Sometimes, you may want to end a combo with j.421A/B instead of j.421C to get a knockdown. Otherwise, the opponent may be able to tech before they hit the ground.

Basic combo after catching the opponent in vines.
If you pick up with 5A, then you won't have to hit confirm left from right, if you have too many hits by the second jump, then the rest won't connect so you'll need to adapt appropriately.

Combo with good damage without launch, and leaves the opponent open for a 3B tech punish.

Uncharged: (The purpose is to just get charges, 214E covers them homing in on you upon recovery. So does koufu.)

Charged: (These do big damage while allowing you to charge again)

See the combo here: http://www.youtube.com/watch?v=NsHOqXzldQA#t=2s. Does over 12K. 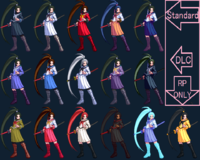