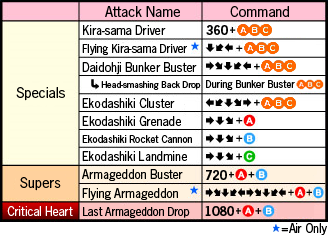 If you ever wished your grappler could fly, look no further. Kira has big moves and the damage to match. Arcana Heart's system makes her interesting at neutral and dangerous up close. Hope you have strong hands, you're going to be churning a lot of butter.

1 - Homing Approach
Kira's A moves are all super slow, so you won't be using it much outside of combos. Your main tools on your approach are JC and JE. JE, is great when you are above your opponent. It has a relatively strong hitbox and it is unclashable. Your opponent won't be able to challenge it with 5A clash on reaction. It also hits Cross up from a lot of sharp angles. JC is slow, but it has clash from frame 1 and good reach. This move is a core component of Kira's air game because its hard to get in almost any other way. When homing straight into your opponent you can force a clash battle at will with JC. You can also clash though many attacks and use it defensively for your homing.

2 - Neutral Spacing
Kira has a set of anti air grabs, but those are risky and can lead to a loss of momentum. Definitely not something you want in AH3. 2B is an air unblockable with good reach and start up. You can use it to tag jump outs, jump ins and force clash. You need to throw it out early though, the start up has nothing going for it. If someone is trying to 6D, ice step towards you or engage in a clash battle with you, 5C could come in hardy. It has clash from frame 1 and can set up a command grab after the clash.

3 - Hit Confirms
2B confirms into almost anything. It floats your victim, so you can confirm it into the 623 series for EF or homing combos. In the air, when forcing your opponent to block toward the ground, with JE or JB you can anti air them with 2B into the same thing. If they try to get away with a 4GC, you can anti air them with 6C. Low JE hits can also be confirmed into 2B and etc.

4 - Defense
Kira's SPDs are faster than her normals... So poking out is strictly forbidden. You could try to force your way out with 5C, but you're encouraging a clash battle. You could also out right win the clash battle with C Driver, but that is range dependent. You lose to characters with better A or B moves out right. Also, if your opponent knows what they are doing they would just try to jump out. Of course, if you read the jump you can counter with 2B. Make sure you account for good reversals and 4GCs. Every Kira player needs to get used to this RPS with Kira. I'm sure Sirlin would play this character. Kira doesn't have much trouble with projectiles though. 2B is a great move for that as well. Against projectiles that you cannot reflect, you're better off blocking since unplanned and sporadic movement can lead to sadness for Kira.

Few Arcana perfectly compliment Kira. Most of the time, you will go with choices that supplement her high stamina and increase her damage potential. Think of it as upgrading a tank.

Metal
One of, if not the most popular arcana for Kira. Not only does it supplement your stamina, but metal can boost your damage of small confirms enormously. Metal Kira has an easy confirm into Dikaiosi that eats chunks of health at a time. You can continue to make Kira strong and stronger for that round with Epidosis. Metal shield also helps Kira with some mixups post knock down. They can't hit you, but you can grab them.

Earth
Earth gives you a lot more stamina but takes some power out of your punches. Luckily, Earth Punches can fix that with the right confirms. Earth's 6D can also give you some interesting gimmicks for your SPD.

Evil
Evil (Commonly referred to as poison) offers powerful projectile okizeme, and a swap positions super to combo while your force gauge is recovering. Teleports can also be used to mess up the positioning of zoning characters such as Scharlachrot, and make approaching them that much easier.

Thunder
Thunder takes Kira's existing clash game and adds to it with a fantastic reversal/anti-air in the form of 623E and clash frames on forward dash. During okizeme, Fearg Lorg can lock down your opponent as they try to guess their way around a throw mixup. It's especially dangerous since Kira's 623 series can punish people trying to chicken block it on wakeup.

Will miss on small characters such as Fiona. First 2B must be pretty much point blank, or close to that.

Yes this still works. Emergency use only.

This is one of Kira's most damaging 623C followups. 41236B can be replaced with Evil 623E for poison although you lose the RPS opportunity, or Steel 214E to protect against wakeup mashing.

623C combos
Metal, Thunder, Evil, Light, Arcana Blaze all are guaranteed. Metal requires the 2nd combo as you need to perform the Blaze the second after you bounce them off the ground with 623C. Depending on timing Love can be made unavoidable.

Sets up RPS at the end of a combo or a 2B launch at the beginning of one.

It is possible to loop this twice using 623C instead of 2E on the second loop.

Guaranteed poison at the end of a combo, although oki is not strong.

Extremely high damage EFC combo with metal, timing is crucial to ensure you're still in extend force at the end.

Timing is a little strict with the D~jA, going too high will make jE whiff

Does somewhere in the realm of 11k, use 6D when doing this on a cornered enemy to cross under them and ensure they cannot hit the wall early from the icicles. The magic rule of <3 hits applies here as well. If you use the jA jE 5AA 623B hit confirm, expect to only be able to hit the first rep of the icicle loop as they will be able to tech as you charge the 3rd 2[E].

When done off a raw sweep or 5B, will do around 10k. This combo will drop if the 41236C hits from too far, as they will be able to tech at the 5B. This combo will work off of 623B 4D, and may require some care to ensure the proper distance is achieved to make the 5C 2C 41236C sequence hit deep enough. Interesting oki setup as Kira's dropkick will cover about 2/3rds of the zoomed in screen.