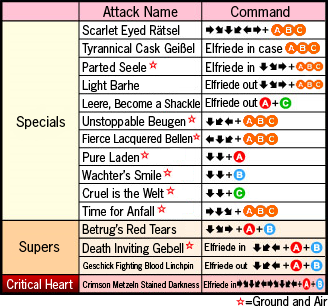 Even dolls have feelings. Lieselotte and Elfride together make a powerful combination. Liese can freely use Elfride to to trap and out-zone any character. Lieselotte is a great character for experienced players that want a challenge.

1 - Homing Approach
JA has a relatively good hitbox and hits twice. It's best to be more aggressive with that when you have the doll to cover you. For all else JE is your friend. It hits a wide range if front of Liese and hits cross up at a lot of angles. Since it ground slams, there is always the change to steal the momentum or combo with Elfride around.

2 - Neutral Spacing
Most of the time you want Elfride out of the case so she can help you zone. But since you start out each round with the doll in its case. You can use this to out-space aggressive opponents at the opening of before you start the lame-game with Liese. 6B and 6C are good anti-airs with a lot of reach that cover good angles. With the doll out, your job is to put out markings whenever you have a free moment to disturb your opponent as much as possible.

3 - Hit Confirms
Many of your air-to-air JE hits will be part of relaunch combos with Elfride's JC attack.

4 - Defense
Liese is going to have to rely on on guard cancels and and timed pokes to get out of pressure. She doesn't have much going for her on the reversal sector. However, having Elfride in your area while blocking is menacing for your opponent. As you area holding [4] or [1], the doll is still walking towards you as you block. She also responds to buttons as you block, so you could have her disturb your opponent when Elfride gets close enough. Most of the top your opponent will either rush to get a hit on you or try to get away when pressuring you, something you can take advantage of.

Arcana's that go well with Liese help her trap and mixup game.

Halo
Halo has a lot of tools that compliment your coordination with the doll and make corner pressure even more powerful. Also, with celestial gate you gain a much more reliable move for getting out of pressure.

Evil
Evil increases the damage of EFC combos and adds to Lieselotte's mixup game with teleports. It also adds the ability to use EX teleport to place the opponent in the corner along with the doll.

Luck
Luck adds to Lieselotte's corner oki and mixup game tremendously, allowing her to loop the mixup into itself. The Luck passive abilities are also fairly useful.

Fire
Fire adds to Liese's midscreen damage and her zoning tools by preventing the opponent from approaching from the air. Good for pressure and corner loops, as well.

-Same as above, only further away.

-Pretty much only used if hit confirming off a 2C. Same damage as above but costs a meter and doesn't push as far into the corner. Costs 1 meter.

-Pushes far into the corner and does decent damage. This is your best choice.

-Gives good oki and knockdown. Can follow up with an Arcana move for stronger oki. 5[E] is used for connecting a super to it via Arcana specific corner combos.

-Does a little less damage than the one above it, but it's safer against DPs if setting up oki. j.E can be jump canceled into an arcana special for oki and mixup. Costs 1 meter.

-Very very useful. Gives knockdown and does a decent amount of damage off 2A. Costs 1 meter.

-Very difficult to time, but does the same as the one above. Costs 1 meter.

-A more advanced EFC combo that will work on Kira. Will not connect against most of the cast.

-Very useful. The 623C adds quite a bit of damage to the combo. Costs 1 meter.

Combo into OTG 5[E] for poison and pit super for knockdown. The doll 5B at the end is input after the superflash in order to keep them in OTG state long enough for the super to connect.

Not really worth the meter, but it's flashy, so have at it.

Good damage. The combo can push the opponent into the corner from about 3/4th of the screen away. You can do j.AB 236E a second time if the combo started from a 2C. Not really worth the extra meter, though.

Meterless corner option. You can do the 236E combo off any starter, as long as Elfriede is in the corner with you and it hasn't prorated too badly up to that point. Good damage.

You can do this combo for about 4-5 reps, and it does good damage. A little difficult to setup, though. Meterless.

A fire EF combo that ends in knockdown. Sends Elfriede AND your opponent to the corner. Difficult on small characters.

Combo is used to switch sides. Useful to put your opponent into the corner midscreen, or after a cross up. 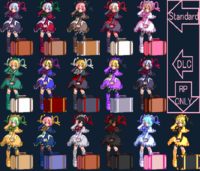