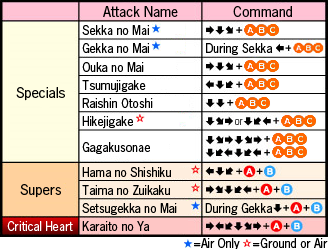 Maori is a priestess with great keep-away game. In exchange, her close combat abilities aren't that great. By using her sisters for help, they can protect Maori in her times of need. Maori is great for people that like to play heavy zoners.

1 - Homing Approach
The normals in the air for Maori really aren't that good to use as they have slow start-up time or rely on her momentum. JA however, seems to hit overhead though. It can be used after the opponent blocks a top(623X). Which has to be blocked low.

2 - Neutral Spacing
Maori can use 6A to cover a good amount of space and distance. Don't use it to often because it doesn't have a very fast start-up.

3 - Hit Confirms
Maori's A moves are very fast. Use these to confirm in other normals. 6B does two hits and allows for loads of time to think about what to do next. 623A/B/C can be thrown out by itself at the right distance so as not to trade with opponents attack. Then she can follow with an HC combo.

4 - Defense
Big sister is a major part of Maori's defense. Hama no Shishiku comes out guaranteed very quick, you could use it as a reversal fairly easily. It also almost always trades in your favor. Raishin Otoshi and Tsumujigake can be used off a 4GC to reversal depending on how you think your opponent will try to approach you (Raishin for air, Tsumujigake for ground). Tsumujigake can also be used during a 6GC to help assure that you win a possible clash battle. Judge where the opponent is on the screen and use the sister assists accordingly. If opponent blocks a sister, use that blockstun to your advantage and follow with a 623X.

The Arcana that best go with Maori are ones that allow her time to get away and make up for her lack of damage and slow normals. As well, arcana that let you set up traps to deter rushdown attempts and/or further augment Maori's zoning from different angles have great synergy with her summons.

Flower
Flower greatly makes up for a lot Maori's weaknesses. It's 236236E super covers a lot of space and allows Maori to get away to reposition herself. It has buffs that can add defense and attack strength. It can also give some health back. Allows fo no counter hits. Great for whiffed or misjugded normals. Standing by planted flowers slowly give meter. Using the sister as keep away can give you a lot of time. Having a very fast Arcana Blaze is great too. Though it is fairly weak.

Halo
Mildred can add tons of blockstun with her specials especially when she's summoned. You could use this to chip away at the opponent health or go for a guard crush. Then follow up for a combo. Halo special moves on hit do a good amount of damage. So it's best to find ways to hit-confirm into them for maximum potential.

Sin
Sin makes close-range rushdown characters think twice about speed homing in with attacks via pinwheel traps. Their options tend to become limited to either: 1) out-zoning Maori, or 2) resorting to low attacks to duck under hitting the pinwheels. You can safely set up traps after any Ouka no Mai, or while any of the sisters have the opponent in blockstun. Air sin balls super is very good for augmenting your aerial zoning, especially if you feel the opponent is starting to easily outmaneuver/counter-hit you out of summoning Koito and Kouta. A very easy confirm with Ouka no Mai into Arcana Blaze is icing on the cake.

Wind
Wind augments your horizontal zoning more reliably than Koito and Kouta for those periods of time immediately after summoning your nee-san. As well, Maori gets pushblock to replace advancing guard to keep opponents out of her face when vanilla 6GC no longer cuts it. The cyclone traps don't last as long as sin traps, but are still a decent deterrent for reckless rush-ins, and you can easily confirm with a homing air combo into Setsugekka on impact. You'll have to be on point with all your summons though, due to the poor attack and life modifiers.

Fire
Fire is mostly useful for hitting from different angles and giving Maori a good boost to attack power. You'll be able to cover 45 degrees upwards and downwards with the fireball, and attack half the screen with the Kakou Ha. Maori also gets a good reversal worth mixing up with Hama no Shishiku, if the opponent has already gotten used to moving after nee-san's initial dive. Fire's unblockable Es will also give you some gimmicks, due to your sisters' easily enforced blockstun times.

You could avoid using 6A until you are used to using it. You can also follow up Tsumijigake easily when near the comer

Can start the combo off random top hits and close 22X

The j421AB is mostly just for show when you have 3 bars. Hit with it towards the end of the Setsugekka.