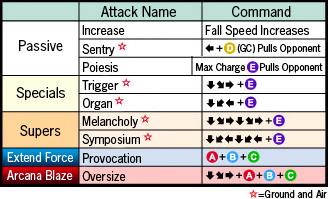 Medein is a giant, turtle-like Arcana that can manipulate magnetism. Medein respects Catherine's curiosity towards Arcanas and decides to help her with her spirit research.

Poiesis - Your max charged E moves will pull the opponent in.

Increase - When you are falling from a high position, you will fall increasing faster.

Sentry - Your 4GC will pull the opponent in towards you. Not slowly, but with a forceful and immediate pull. Pretty scary the first time you do it...

Provocation - During EF you will continuously pull the opponent in towards you. Combined with the normal EF speed increases you can do some fun combos with this.

E
Fires a homing orb at the opponent. Usable in the air. Slow start-up, but the homing capabilities on this move are pretty good. If the opponent moves past it, it will even turn around and stab them in the back.

E
This move will toss a random object from the streets of Chinatown. You can do this in the air too. The start up is the same for all of the objects, but the damage changes. Generally the larger objects do more damage.

E
Generates a large magnetic field out in front of you. You can use this in the air as well. It will pull the opponent in and damage them, similar to Seth's Tanden Storm. The pull-in effect is pretty strong, so you can almost always at least make the opponent block this, plus it does a lot of chip damage. Unfortunately, if you get hit while it's out it will disappear.

E
This is the super version of Organ, usable in the air. This will sends 4 random Chinatown park items out at various angles. The start-up is pretty slow but it puts stuff everywhere on the screen, making it a decent zoning tool.

Oversize - When you activate this, you and your opponent will both be attracted towards the center of the screen and Trigger orbs will bombard your opponent. It's hard to say that this is completely in your favor at all times as it's fairly dependant upon the particular matchup. It will last for 418 frames, but if you get hit then it will end immediately.