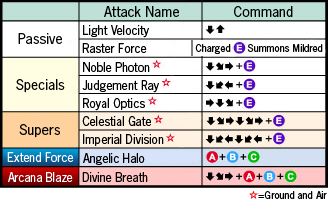 Mildred was a higher being who was caught in a dimensional split between her world and the spirit world. She received new powers from the spirit world and became a full Arcana. Seven years ago she reunited with her true older sister, Angelia, who she was separated from for her entire life. Mildred acts as Ange's guardian Arcana, wearing a smile while she deals with her antics.

Raster Force - A max charged E move will summon Mildred to attack the opponent as well, practically making your charged E move unblockable. Since Raster Force becomes its own move during EF, it will activate during that period of time.

Light Velocity - This will increase the maximum height of your high jump. Good for characters with poor movement to begin with, but it takes a bit more time than usual before you can do things after the start of the high jump.

Angelic Halo - During Extend Force, Mildred will trail behind you and your Arcana moves will be stronger than normal. Not just stronger, but MUCH faster than normal and guaranteed to come out. Raster Force also becomes its own move during this time. If Mildred gets hit, she will disappear and you won't be able to use any arcana moves for 115 frames.

E
This has you fire an orb of light, with limited tracking capabilities, towards your opponent. You can use this in the air. The orb of light will explode on contact with the opponent to damage them. The start up is a bit slow, but it moves rather quickly and causes a long period of untechable time on hit; easily comboable with a neutral homing towards the opponent. Aside from the start up, it is an all around good move. During EF, its start up problems are gone as the start up is now less then half of what it is normally. During EF this is great for combos, pressure, you name it.

E
This will cause an explosion of light right in front of you. You can do this in air too. This move usually isn't used that much, but it wall slams on hit and does high damage. Slow start-up, but it has a good hitbox if you get it out. Because of the wallslam and long untech time, it's very easy to follow up with homing. Because the input for this overlaps with the EF-exclusive Rastar Force, you cannot use this during EF.

E
Rays of light search out your opponent's trajectory and hit them after a slight lag. What that means is that if they are in the middle of back dashing, it will appear behind them. If they are dashing, it will appear in front of them; this move will appear ahead of your opponent in relation to their momentum. You can do this in air as well. It will try to hit them no matter where the opponent is so this move sees a lot of use. Unlike Noble Photon though, this only gets a few frames quicker during EF.

E [During EF]
Mildred warps behind the opponent and kicks them upwards. You can use this in air too. This can only be used during Extend Force. It's hard to incorporate this move into your play, but it at least works very well as a surprise attack. Easy to combo off of with a neutral homing.

E
This will create a pillar of light right in front of you, usable in the air. The start-up is decent, but better yet 4 frames after activating this, it will be guaranteed to come out no matter what happens to you. Additionally, it will always come out during EF. These give it a decent functionality as a reversal. The attack starts from the bottom up, covering the entire screen height, so you can ignore that factor for combos etc. This move does great damage and depending on how many hits/how you hit them, you can follow it up afterward. The attack range is somewhat thin horizontally, but that is the only real weakness of this move.

E
This is the super version of Judgment Ray, usable in the air too. This well release three Judgment Ray attacks in a row. This is mostly for zoning to force the opponent into the corner or some chip damage. The start-up is pretty slow and it has terrible recovery on the ground. Luckily the recovery in the air is pretty good, so if you are going to use this, use it in the air. This move is much better during EF. The start-up is less than a third of what it is normally, you send out six Judgment Rays, and it's also guaranteed to come out, making it one of the best zoning tools in the game. Use this in EF whenever you can since you can use it for reversals, pressure, zoning, combos, and more.

Divine Breath - After the animation, Mildred brings a divine light down onto the opponent. The ray is very thick and homes on to the opponent's position. The start-up is pretty slow, but it is instantaneous after the superflash and will hit the opponent anywhere on the screen. If they are not already blocking by they time it goes off if they are in the air they are going to get hit, so go ahead and use this for an extremely flashy tech punish.