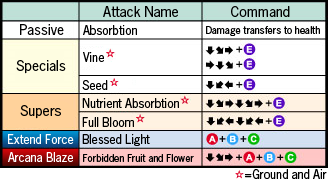 Moriomoto is the higher existence that allows vegetation from the spirit world to live on in the material world. He has the ability to freely manipulate plants and is on good terms with the Koinu (Konoha's) family.

Plant is a strong aggressive arcana that leaves a little to be desired in terms of defense - though that is more than compensated for. The main tool you gain with plant is the vines, which you can think of as a giant poke more than a zoning tool. Vine can also improve any characters pressure when used correctly, and gives most characters good meter-less combo options (some more than others).

Plant also gains back life from EF, connected 5/2E attacks, and the super version of the vine. This mitigates the arcana's poor life modifier. The other good thing about plant is that it can use the 214/214214E series to set up unblockables, and just be a nuisance in general after a knockdown.

Blessed Light - During EF you will gradually regain health over time. There is an interesting trick that you can do with this. Even if your Force Gauge is at 0%, you will continue to gain HP as long as the EF animation is out, which will continue through the animation of your last move. Therefore, if you use a super that has a long animation as the last move before the EF ends, you can extend your HP recovery.

The life you gain from this is really quite minor compared to plant's other methods of life gain.

E
This will extend a vine straight forward to hit your opponent and drag them back towards you. You can use this move in the air as well. This move has great start-up and range, so you can pretty easily combo C level moves into this. This is good for making meterless combos with just about every character. The duration is rather lengthy and it ignores clash, so you can nab either guard crush attack with it, and it's plus on block. This move is almost too good and is a major reason for choosing the Plant arcana. Better yet, the second hit of the move counts as a lock move, so it will beat out the super armor on some of Fiona's move as well as Earth's Hyper Armor. Also, since its a lock move, the opponent can't burst out of it, allowing you to make a super move after a Vine un-burst-able.

As you already know, this is a 2 part move - an initial hit, and then a follow-up that will pull the opponent in if it connects. The follow-up's hitbox is actually smaller than the initial hit, so on crouching characters the vine will often not pull back if they aren't close (the hitbox is fatter closer up so it's not a problem there). Some characters will still get hit crouching even if they are far away. It's important to note that even though you can go under it in some cases, the vine will still catch low-profile moves if you get too close, so you can't just go under it despite appearances.

Vine can be homing cancelled only on hit, not block.

It's possible to both 6GC and 4GC right through it with good timing, so getting predictable with this during pressure means you will get punished easily. You can mix it up by delaying the vine, or even better, jump cancelling / doing something else that will allow you to punish guard cancels while being safe.

E
When on the ground this will be an anti-air Vine. The air version is an anti-ground vine. Just like the 236 version, it will pull the opponent back to you on hit; the other properties are also maintained. Depending on how far you hit the opponent with this, you'll have to ad-lib the rest of your combo. The ground version of this has slightly shorter start up than the other versions of Vine.

E
This will release a dandelion-like seed. You can use this in the air and can HC or EFC this move. The seed slowly floats down during ground activation and falls quickly during air activation. You can tiger knee to get your seed on the ground quickly. You can hold the button to make the seed float further out. When it reaches the ground it will remain on standby until your opponent comes into contact with it. When the opponent touches it, a flower will sprout and snare at the opponent's feet. This attack hits low. If the seeds are attacked before they hit the ground though, they will disappear. They will also disappear if you are attacked.

E
This move will extend and entangle the opponent in vines. You can use this in the air. This will steal health from your opponent and add it to your own. You can shake the stick and push buttons to increase the damage and absorption, but the opponent can do the same to stop you. Great start up (10F). Besides being used as a combo ender, you can use it to punish opponents that are a bit far from you. A good counter to guaranteed moves like Multilayered Crimson Nirvana since you're invulnerable during the lifestealing animation.

E
This will sow three seeds at once, usable in the air. Shares the same weakness as the normals seeds, so this can easily be mowed down by moves like Zenia's Impulse (j.214A+B), Yoriko's Assailing Punishment (236x) and Punishment's Bayonet (236E). The start-up and recovery of the ground version is much quicker than the air version. The main use of this move though is to go for mixups after a J.E knock down, but you could actually use this for combos for some characters due to the high speed of the ground version. For example: 2/5C 214214E [step] 2/5A → etc. Unlike the normal version, the seeds will stay out even if you get hit.

Like the non-super version, this version will also land on the ground much faster. The air version still has fast recovery and can be used to give you better air movement after an air combo ender.

Forbidden Fruit and Flower - A flower tracks the opponent and captures them. This attack is unblockable. The opponent is then launched around the screen like a pinball, ending with a giant fruit smashing them. Afterward, a flower blooms on their head and the move is over. This cannot hit airborne opponents, but it will hit ground opponents while they are in hit or blockstun. The animation for this is quite long, so you could use it to extend the effects of Plant EF's Blessed Light quite effectively.

Seeds
Not only are the flowers that sprout from this low attacks, but they have the same sweep properties as a 2C. Therefor, no matter how much tech prorate you stack on the opponent, they cannot air tech if they get hit by this.

Vine
If you grab one of Maori's little sisters while they are doing Gagakusonae, it will grab Maori from anywhere on the screen.