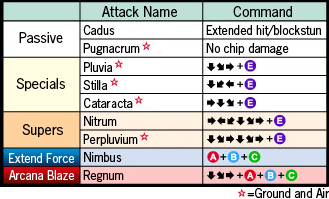 Niptra was once the largest organism in the sea from ancient times; it eventually became a higher existence. It can freely control all water. Out of boredom it decided to lend its powers to Kira, who had declared her intention to take over the world.

Cadus - Your E moves will douse the opponent in water, causing extended periods of block or hit stun. Your max charged E moves will not cause a guard crush, but will force them into a very long period of blockstun.

Pugnacrum - The water arcana will completely nullify chip damage to your character. You cannot die from chip damage in this game, but some moves do ridiculous amounts of chip such that you'd wish you had this passive trait on other Arcanas. This attribute is particularly useful versus the Fire, Magnet, and Metal Arcanas. These Arcanas normally have no problems causing a large chunk of chip damage.

Nimbus - All normals will provide the same effects as Cadus; extended periods of block and hit stun. You can put together all kinds of silly combos during this period of time.

E
Sets an orb of water out. Usable in the air. You can set a max of 3 and they can last for 600 frames. If the opponent hits an orb it will disappear, but it will have absorbed the attack in your place. This move can be a constant annoyance to your opponent trying hit you but only getting, well... balls. There are several moves that will just ignore these though, such as Fiona's Excalibur (236A+B). Any move that can reflect projectiles will destroy these bubbles and still hit the opponent.

E
Causes a set water orb to follow you around. You can use this in the air. The orb will follow you for 270 frames before disappearing. It lasts half as long as a stationary orb, but now you can be aggressive with an orb backing you up.

If you have a Pluvia that is about to dissapear and you grab it with this move, it will still last for the full 270 frames.

E
This will pop a stationary orb, turning it into a waterfall. You can use this in the air. This will keep your opponent pinned down for a long time. It causes the same Slow Down affect as as Cadus so you can pick it up for a combo from just about anywhere on the screen if you manage to hit with this. If it hits in the air though, it will ground slam the opponent, making it hard to combo off of. However, that in itself works well as an air combo ender if an orb is around. You can also go for setups with characters that have J.Es that groundslam, set an orb, then use Cataracta for mixups.

E
This is a command grab. It has zero frames of start-up after the superflash (3+0 to be specific), so if they are not already out of the way, they're getting hit. It does pretty good damage and wall slams after the attack. You could compare this move to Kira's B Driver (360B) in terms of damage, but the start-up is excellent; you should use this whenever the opponent isn't paying attention. You can't burst it or grab break it and the damage is great, so use this if you are unsatisfied with your everyday neutral throw.

E
This will set 3 Stilla orbs at the same time. Usable in the air. The start-up for this is twice as fast as the normal version, so there is nothing wrong with using this instead. Be careful though, this move will not allow you break the 3 orb max rule. If there is already 1 orb, then only 2 will come out when you use this move. If 3 are already out, you would have just wasted a bar for nothing. Make sure you are aware of any pre-existing Pluvia before using this.

Regnum - Niptra appears from the foreground and swallows the opponent. This will not damage the opponent but causes them to temporarily slow down. The opponent can only preform actions at 1/4 of their normal speed. This will end after a certain period of time or when you are hit.

At first Water may seem like a purely defensive arcana with it's taking no chip damage and bubbles that stop people from attacking you. This is partially true, however the bubbles can also be a very strong rushdown tool, especially in the corner. When your opponent can't counter attack you effectively you are open to go for more aggressive mixups. Directly complimenting this, Water also has a high damage command grab that is pretty good all around, though it is a super. Also complimenting its offense Water can use the bubbles to create a waterfall putting the opponent in an immense amount of blockstun, mostly useful for okizeme or if you've been pressuring in the corner with bubbles out. Your E attacks will also cause more blockstun, the fully charged versions will no longer guard break but the buff to regular E attacks can be useful in rushdown if your character actually has good E attacks.

Of course the Water shield does protect you from all chip damage, which can be invaluable in certain matchups (think Catherine), though keep in mind water actually gains very little meter from blocking (otherwise it has fine meter generation). The bubbles can also serve as a great shield for your neutral or zoning game, and this can help many characters a lot. However keep in mind that the larger the character is not only will the bubbles be harder to hide behind, but they will also spawn in a less favourable position.

That being said... these are the main points you should think about when deciding if you should pick water.