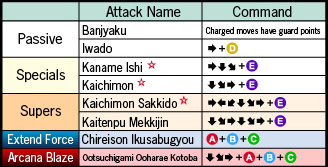 Ohtsuchi is an arcana based on the belief and faith of mankind, formed in the shape of a giant clay figure. Whenever the Kasuga family needs assistance for exorcising evil being, Ohtsuchi gladly lends his powers.

Iwado - 6D guard cancel makes you move much slower, but you'll have a mid-guard point throughout it. If you continue to move forward with this, the damage reduction for the next hit will skyrocket. For example, if you did this towards Kira and auto-guarded a bunch of 5As from her, if she he you with her 360 command grab it would do almost no damage. It's rather unpractical, but an interesting property nonetheless.

Chireison Ikusabugyou - You cannot block during Earth's EF. In exchange, you have hyper-armor. You move very slowly left and right during this, and you don't receive the speed buffs that other Arcanas would get. Unfortunately, throws and lock moves still work, even though you have hyper-armor; the plant Arcana's vines will just tear through this. There is no hyper-armor in the start up of a raw EF, so you can't use this to forcibly mash out of pressure.

E
Summons a giant stone in the air in front of you. You can do this in air as well. After inputting this, you can slightly control where the stone falls left and right. Even if you get hit after the stone is out, it won't disappear.

E
A giant stone punch. You can do this in air as well. This move does some serious damage in one hit. The hit stun and untech time after it is extremely long as well, making it very easy to follow up with a homing cancel. The move is extremely easy to punish if it whiffs though, so you need to put some thought into throwing it out (or have a meter ready to homing cancel it).

E
A super giant stone punch. You can also use this in air. This is like Kaichimon but with more reach. Depending on how you hit the opponent with it, the damage changes. Hitting them with the center of the fists adds about 30% more damage, although you usually will not get this hit in combos. On block, this will guard crush.

E
Ohtsuchi seeks the opponent out and stomps on them. This is an overhead and air unblockable. Decent start up and damage. This has plenty of uses such as air tech punishes and punishing long range moves. Think of a move where you can hit the opponent anywhere on the screen in 19 frames, that is this move.

Ootsuchigami Ooharae Kotoba - Ohtsuchi slowly encroaches towards the middle of the screen, then uppercuts the middle of the entire stage. It does a good bit of damage but is slow and hard to land. It is air unblockable and guard crushes on block.

Kaichimon
After being counter hit with this, it doesn't look like the opponent can burst during the hitstun. Theoretically, you can always hit with super punch after this.