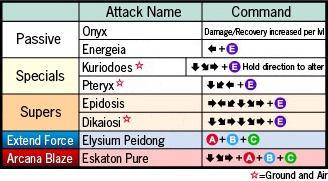 Oreichalkos has been present in the spirit world since ancient times. He is believed to be the oldest Arcana in existence. Oreichalkos's skin is plated in orichalcum and he has the power to freely manipulate metals. He will lend his powers to Fiona until she is able to turn back into a human.

Onyx - The damage of your max charged E moves, as well as the recovery time after the guard crush, increases with each level of the Metal Arcana.

Energeia - The most well-known trait of the Metal Arcana. With this arcana the maximum for your Arcana Gauge generally will not increase normally, even while hitting your opponent. However, with 4E you can charge your meter whenever you want SNK-style. Even while your gauge is not at its current max you can increase your maximum value this way. During EF the charge speed increases slightly.

Elysium Peidong - This will increase Metal's current level by 1 for the duration of EF. Remember, this is only during EF, so you will go back to the previous level once EF has finished.

E
Summons a large sword to attack the opponent. This can be done in the air. After the input, before the sword appears, you can choose what direction it comes out from by holding the stick in one direction. For example, if you hold it at 6 it will come from behind the opponent. Higher levels of this move will increase its size and several properties like the the number of hits and damage. At level three the sword floats the opponent on hit.

E
Summons a giant shield out in front of you character. Usable in the air. If you are standing behind the shield it will take attacks in place of you. It even has its own collision box; the opponent cannot move past it. Just like Kuriodoes, the strength of the shield depends on the current level of the Metal Arcana. The number of attacks that it can absorb and the length of time that it lasts both increase the higher its level gets. At level three it can absorb up the 3 hits. Works well while on the defensive and if you want a chance to use Energeia or perhaps a different zoning move this can protect you for a bit. You could also use this if you've pressured the opponent into the corner to beat attempts to mash out.

E
This will level up all of your arcana moves by one, a rock candy in other words. For one bar this will instantly raise the level of Pteryx, Kuriodoes, and Onyx by one. It will also raise your attack and defense power. This looks like a fast move but there are 45Fs worth of recovery after the superflash, so carefully choose when to use this. The attack and defense boosts are very nice, but unfortunately they do not carry over between rounds; the level of Metal will return to 1.

E
This is the super version of Kuriodoes. It will turn your opponent into a pin cushion by skewering them with sword from all 8 sides at the same time. The damage depends on how far you've leveled Metal in the round, but at the max you can expect 40 hits, with either tons of damage or chip damage plus a long period of blockstun. All 8 swords do not appear at once; after inputting the command you can hold the stick the direction you want the first sword to come from and after that they will appear clockwise from that spot. Since they don't come out all at once, if you get hit before they are all out the rest will not appear. The swords that have already appeared will not disappear though, plus the start-up is 3F so you could technically use this as a reversal.

Eskaton Pure - Oreichalkos flies high into the air then breathes fire onto the opponent. The start-up is fairly slow, but this will hit the whole screen for 100 hits. If you have nothing else to use your Force Gauge on... might as well? It will do a lot of chip since they cannot avoid this (unless they are using the water arcana to negate chip).

Epidosis
Lv 2：Attack and Defense up 5%

Energeia
You can charge even as a dark slime.