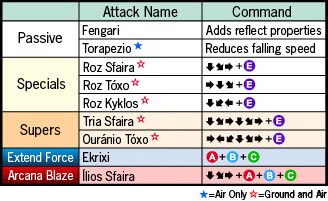 Partinias was once a maiden that proclaimed the miracle of love even unto her death. Becoming an arcana after her death, she can now soften any conflict with her warm healing light. She has pledged to help Heart as long as she does not forget the power of love.

Fengari - This will add reflect properties to the start-up and duration of your charged E moves. You can even reflect Eko's drawings and some other normally non-reflectable projectiles.

. You can also horizontally control your descent as well by holding

. Pressing an attack button or letting go of the stick will cancel this.

Ekrixi - During EF, you can cancel your character's super moves into Roz Sfaira, Roz Toxo or Roz Kyklos. Its usage really depends on what character you are using... this trait is often neglected, but try to remember that you might have the option of adding easy damage or instant okizeme to the end of some of your supers.

E
Love ball. Fires a homing orb at the opponent. It moves pretty slowly but works well as a zoning tool. You can using it the air. Many projectile-less characters can use this as a quick and easy to use projectile. This is also good for okizeme.

E
Love laser. This will fire a beam instantly across the whole screen. You can use this in the air. Good start-up and damage make this move a long range menace. This move can single-handedly destroy a lot of other long range zoning attempts and quite easily snipe the opponent from full screen. This provides a long period of untechable time on air hit, so you can easily pick up the hit with a neutral HC. This is one of the best projectiles in the game.

E
This will cause you to deploy a special, projectile-absorbing barrier. Works in the air too. You can keep it out by holding the button. After absorbing a projectile, a large homing orb will come out. Somewhat hard to use because of its slow start-up, but it will eat just about any projectile in the game. Note that no matter how much you absorb, you will send out just one orb afterward.

E
Fires 3 Roz Sfaira at once, usable in the air. Great okizeme and I-have-some-meter-I'm-not-using-why-not zoning move.

E
This will have you shoot a giant laser forward. It can be used in the air. Just like Roz Tóxo it can reach full screen, but the start-up is slow so you usually only see this in combos.

Ílios Sfaira - This will summon Partinias to chuck a giant love ball at the opponent. The orb starts from a very high position and is air unblockable, so it would be practical to use this as a burst or tech punish vs an airborne opponent. The orb eventually expands and fills the entire screen, so you can use this as a flashy mixup too. The force gauge recovers pretty quickly after a Blaze too, so you could use this in the middle of a match without having to worry too much.