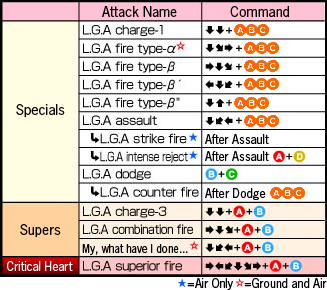 1 - Homing Approach
For Petra, her JB is her strongest air to air move. Even in clash situations, her JB usually wins without requiring a cancel into a faster move like many other moves, thanks to it's amazing hitbox and good start up. Homing into JB, and trying to hit from max range is very strong air to air. JB has longer range than man other air spacing moves in AH3, so it can easily counter hit other characters if they try to be aggressive, or it can force them to block, helping you to grasp the advantage. When the opponent is on the ground, however, JA is the stronger choice by far. It's very quick and has quite a good hitbox, allowing you to confuse the opponent with quick overheads and cross ups. Homing into JE is good from max range, as JE has a gigantic hitbox and sends the opponent flying to the ground on hit.J.E also has a nice clash hitbox, so you can cancel that into homing, or another air attack depending on positioning. In addition, homing into J236C is very strong as well. The range on the move is very large, the damage is quite hefty, and it's very quick, so if the opponent tries anything, it'll nail them.

2 - Neutral Spacing
Thanks to Petra's long range, from far away, your opponent always has to worry about 4Petra's β shots. When you manage to get up close, you can use Petra's quick, long range 2A poke to keep the opponent at bay. Her 3B is also low, and even longer range than her 2A and 2B. You can use this to your advantage by hitting an opponent with 3B from a spot that they're unable to hit you at. A quick j.236X move is also strong for keeping the opponent at bay.

3 - Hit Confirms
JB on counter hit against another air opponent is very easy to hit confirm off of. The stun lasts a long time, so you can generally either land, rejump and finish off the air combo, or simply double jump into another JB (and possibly JC) into a combo. 2A cancels into itself 2-3 times before the timing becomes too tight. However, thanks to the versatility of her ground normals, 2A 2A 2B should give you enough time to react to see if it hit or was blocked. From there, you can do a variety of things, including jump cancel, longer block strings, β shots, etc.

4 - Defense
Petra has something unique in Arcana Heart that no other character has that makes her defensive game particularly threatening. That of course, is the dodge. Dodge will punish even really fast 2A pokes, as well as hitting opponents who are homing in on you. Not only that, but you can homing or EFC out of it on both hit and without even doing an attack. You can dodge into 6D and throw the opponent without even throwing out a dodge attack. It's an extremely versatile and deadly defensive tool when used correctly. There are 3 main weaknesses to dodge though. The first being that you can be thrown out of the move. Not just regular throws, but attack throws, such as Lilica's J214 command throw, Flip Through. The second being that Petra loses her collision hitbox during dodge. If the opponent ends up behind you, then you're in trouble because Petra's Counter Fire only hits in front of her (barring opponents that are practically hugging her, which is extremely rare). Your best bet is to EFC into neutral block, though sometimes you can escape if you use 6D. However, since the opponent is now behind Petra, you have to 6D toward the opponent, but she will end up 6Ding in the direction she's facing. It gets confusing, and you might end up 4Ding, which will actually send her hopping right at the opponent! The third weakness is that the recovery on whiff is quite brutal, so it's very easy to punish if the opponent baits it out and you do it. If you have a bar, cancel into L.G.A charge-3 to help cut the recovery and preserve some momentum. As far as other defensive options go, β shots can actually be used for defense. If the opponent doesn't understand their trajectory, 421 and 623C could tag the opponent as they are trying to open you up, have the opponent rush in to try to hit while you look open, only to be tagged by a counter hit bullet and lead into a combo for Petra. As far as anti-air's go, 2A can sometimes be good thanks to Petra's small hitbox when she does that move. If the opponent doesn't do a deep hitting jumping move, then you can actually go under a lot of moves by anti airing with 2A. Counter Fire A is also a good anti air as it is air unblockable. It has a nice big hitbox and doesn't clash with moves, rather, straight out beats moves. As far as clashing air moves go, 6C is your best bet, although it's not always reliable, and might end up getting you counter hit instead! Aside from that, take advantage of Petra's quick JA, and use that when you find the opponent trying to air dash or do some other tricky jumping move.

Petra has innate zoning tools and great spacing moves, as well as a good tools for defense. So Petra's choices in arcana end up being more of a supplementary tool than a necessity. This means that in general, you can really use any arcana with this character and find some way to make it effective. Here are several popular choices.

Love
Love is just overall a strong arcana. Having love balls out gives Petra time to reload, and a full screen laser gives her a fast projectile at the one range she's unable to reach by herself. Since she doesn't really need love for combos, it can help on wakeup to either let her retreat safely, or to get on the offensive. The versatility of Love, and the versatility of Petra makes this a very easy, solid combination.

Tyr
The EFC effect from Tyr is very strong, and since Petra doesn't quite need the actual attacks, the EFC effects alone are enough to make Tyr worth using for Petra. Using EFC both in combo, and just activating it and then pressuring means that you'll definitely be using it quite often, which in turn boosts the effects.

Does not work with opponent in the corner

Use 214B if opponent reaches the corner