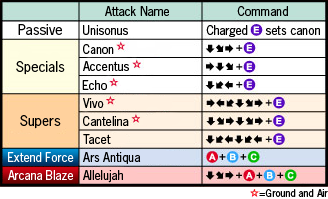 Phenex is said to be the source of people's love for music. It is a meta-being that can manipulate all sound. Its voice can raise the heavens or bring destruction to the world. Phenex was charmed by Akane's singing voice and now lends its power to her whenever she needs it.

Unisonus - Sets a musical canon out after a charged E move. It doesn't matter if the attack hit, was blocked, or completely whiffed, the canon will appear. It does not attack the opponent on its own, but will rupture and attack the opponent depending on which move you use to activate it.

Ars antiqua - This will set a canon out for every attack on hit or on block during EF. Some characters have combos that will set out several of these in the same area. If you make them resonate at the same time, you can cause tremendous damage (and noise). You can make some quick and easy damage off an EFC and Accentus. The canon made from EF still follow the rules of a normal one, you can only set up to 5 at the same time. If there are already 5 out, you will not make any more.

E
Sets a musical canon out. Usable in the air. After being set they will move forward very slightly. These will not disappear until you trigger them with a move or the round ends. You can only set up to 5 at the same time, but with this move new ones will appear and old ones will vanish.

E
This will cause your character to rise into the air, releasing a sound wave. Usable in air. This does not have invincibility but the move starts up very quickly, often leading to trades. Alone, this move is rather weak, but it can resonate with the canons surrounding them and will cause them to rupture and create a similar sound wave. If you have a couple around, the damage and number of hits will increase greatly. Resonating with multiple canons will make this move very powerful; favorable trades and big damage all day. One thing to be careful of though - if the wave from Accentus gets clashed, it will prevent the move from activating other canons.

E
This move will release a crescent-shaped sound wave from your hand. The ground version fires diagonally upward and the air version fires diagonally downward. This does not have an attack hitbox at first, but it can attack after hitting any of the edges of the stage. If the echo hits a canon, it will rupture and produce two new sound waves. This is pretty good for a "set it and forget it" zoning tool, although if you get hit it will stop.

E
This will set 3 canons at the same time. Works in the air too. When you activate this move you can press B or C to change the pattern. The best time to use this is when you get a knockdown near the corner.

E
This move will nullify all projectiles on the screen. This kills just about anything: Cathy's Chibigawa, Dorothy's cards, Nazuna's summons, Metal's swords, etc. Furthermore it only has 2 frames of start-up, so you can pretty easily erase any projectile on sight.

E
This is the super version of Accentus. Also usable in the air. Comes out much quicker than Accentus, making it more "DP like." This will also resonate with any canons hanging around to boost the damage you do.

Allelujah - Phenex appears and creates a large sound wave to attack the opponent. Your EF combos combined with Accentus or Vivo will already be doing stupid damage, so there is almost no point to using this. However, the first hit of this is is air unblockable.

Cantilena
After the move activates, you can change the pattern of the canons with: