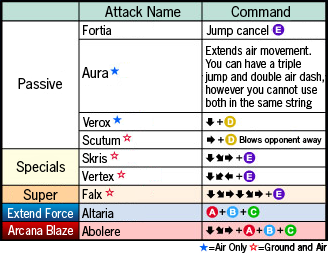 Tempestas is a meta-existence embodying the power of the wind. As you would expect, it can change air pressure and control wind of its own free will. It was once gravely wounded but nursed back to health by Lilica. Out of gratitude, it lends its power to Lilica for as long as she desires.

Fortia - The wind arcana will allow you to jump cancel your 5E and 2E. This makes it much easier to convert any E attacks you land into combos without having to use any meter whatsoever. Since AH3 lets you cancel jump animations into specials, it's possible to cancel E attacks into specials using a jump install. For example, a character can land a 5E, input 2369a and it will come out as a ground 236a. Since characters normally cannot cancel their ground E attacks into non-arcana specials without an EF, this technique opens of lots of combo and blockstring possibilities should you land one of these attacks without EF meter.

Verox - When you use 2D while jumping, you will cancel your air momentum to do a very high speed fast-fall. This works very well for some characters for extending their combos. Some characters can use this to do high/low mixups too.

Scutum - When you use your 6GC, wind will blow the opponent away. This quite effectively makes your 6GC an Advancing Guard or pushblock. This takes out having to read what the opponent will do next like with other Arcanas that have a a normal, clashing 6GC. With this you can free yourself from pressure by forcefully pushing them out to mid screen. This is great too for zoning or characters that don't have good reversal options. Also, since the opponent will be unable to do anything for a split second after being pushed, you can use this offensively by forcing your opponent into the corner and instantly taking the upper hand.

Altaria - During this time, you can airdash cancel air moves that are normally jump cancellable. In other words Melty Blood-ism. This can help you make some ridiculous combos during Wind's EF.

E
This will have your character fire out a Sonic __om-like projectile. You can use it in the air. The projectile will travel a certain distance then start traveling back towards your character Legend of Zelda style. If you use a jump or homing to move out of the way before it reaches you, it will continue to follow you, which effectively extends how long the projectile is out for as long as you want. The projectile will only disappear if it comes back to you, hits the opponent, is neutralized by another projectile, or if you actually get hit. This move is good to just put out when you have a free moment as it could get you out of a tight spot. There is a brief moment during start-up where you can get hit and the projectile will still live, and even if you do get hit past this period it will fly out straight for a bit, then disappear.

E
Sets a small tornado out in front of your character. Usable in the air. If it hits the opponent they will be launched high into the air. There's quite a bit of untech time when this hits, so even if you traded with the opponent you'll have plenty of time to complete your combo with neutral Homing. It lasts for a short while so you usually see this used as okizeme, set just above a crouching hitbox. If the opponent presses a button, tries to jump out, or you land a hit on them, Vertex will blast them into the air, allowing you to scoop your combo up easily. Vertex normally can't be reflected or negated, but it can be clashed, although it can't actually be negated. It is thus possible to pass through it with something that moves you forward fast enough, although it still remains active (and dangerous) until the duration runs out.

E
This will have you throw out countless Son__ Booms, like Charlie's Sonic Break or Remy's Light of Justice. You can use this in the air, but they won't boomerang back to you like the normal Skris'. If you mash buttons and shake the stick you can add more hits to the move. The maximum is 16 hits. Fast start up (6f), very easy to tag onto the end of combos.

Abolere - Tempestas appears in the palm of your hand then flies straight forward with a powerful squall to blow the opponent away. This Blaze doesn't do too much damage (8000), but it has zero frames of start-up after the superflash.

Abolere
Every character has a different animation for the palm of their hand during this Arcana Blaze.