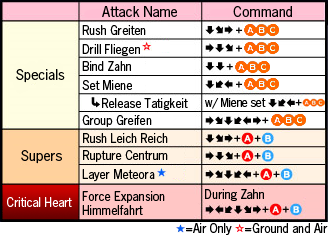 Only Weiss can bring a knife to a fight like this. Weiss, a new addition to AH3, sports a wide array of moves for rushing down and getting out of pressure.

1 - Homing Approach
JC is a good move to use with neutral homing. It hits two times and the second hit is easy to confirm off. After the second hit, all you have to do is jump to follow it up with another JC and them homing to add more damage.

2 - Neutral Spacing
Put your sword on. Weiss has a move (22ABC) that allows her to equip a materialized sword. While equipped, all of her normal moves besides the ones that use her feet will be powered up (5A 2A 5C 5B 2B 6C JA JB JC). Not only does it double the reach of these normals, she doesn't have her own hitbox in them, making them extremely strong for spacing. Make sure you are either full screen from your opponent or get a knockdown set up, it takes a while to recovery from 22ABC. One way to do this is to end combos with JC; while they are still trapped in untech time from the second hit of JC, land and equip your sword. While equipped, rising JA becomes a delicious tool as it has double the reach and is already part of the "baller-JA" team.

3 - Hit Confirms
JA will be a source of air-to-air confirms. It easily ties with JB > JC > 623X into a jump cancel for more damage. When you're force the opponent to block JAs in the air when low to the ground, use JC before landing to keep them up there and hit them with the air unblockable 6C for the guard break. When Weiss is equipped, 2A becomes a good combo starter from almost all ranges.

4 - Defense
Weiss has a decent 2A to poke out with so use that if you find an opportunity. If you're all ready equipped, it will increase the chances to use it. You could even use it as an anti air in some situations. Besides that, Weiss also has 623AB. This might be the best super reversal in the game as it has tons of invincibility and good upward reach. It also comes out on frame 1. This move is menacing for opponents trying to IAD on you or run okizeme. Like all reversals, you need to be careful because there is the risk of being read well and punished; its not 100% safe. If it gets blocked, HC to save yourself, if it hits, you can easily follow it up with a HC. It is also great when used aggressively off a 6GC.

Arcana that go well with Weiss help give her time to use 22ABC and add damage to the end of combos.

Love
Love works for Weiss too. Great modifiers and gives projectiles to help cover Weiss' rushdown. Since it is somewhat hard to use her own supers at the end of combos, super love beam is great for adding damage. You can also use Love's blaze to put the finishing touches on your opponent after a neutral homing or JC combo ender. Remember this arcana when you have trouble picking any other for certain match ups. You can almost never go wrong with Love.

Thunder
Also good for Weiss. As a rushdown fighter, clash on Es and step is an awesome tool for asserting pressure on your opponent. Weiss is also blessed with moves that a great for clash wars such as her fast 4B that has lower body invincibility from frame 1, her DP, super DP and command grab as well. You don't normally use Weiss E moves, but with Thunder you can use them for force clash situations and respond to reckless NHs. Weiss' 5E has good reach too, so you could half charge 5E to bait players trying to run away with 4D and combo with an HC or EFC. Just be careful of throws and cross ups. Step is good for thunder Weiss as she can mix her command throw in if the opponent decides to respect it and try to break a throw. If they try to poke out and clash, you can respond with 623AB. Thunder EF traits also work with 623AB since your block animation will have clash. You could use it like a guard cancel for some pretty serious punishes. Be systematic with this though, Thunder's modifiers are not that great and it's FG recharges slow... finding yourself being unable to burst when needed could cost you.

Time
Time Weiss has strong mixups and the damage to match with Time only loops. You can also use Infinite light to create ambiguous setups with Freedom from Bondage and equip your sword at the same time. Time's Backstep gives you another good defensive option that gives you a higher degree of stability midscreen and 6D is good for left/right mixups. Time is very compatible with Weiss and is great for the more advanced players.

Magnetism
Magnetism is a unique but good arcana for Weiss too. 236E has a rough homing path that can help cover your spacing, but you need to space it well because of its usually slow start up. 236236E is easy to tag on the end of combos and does a ton of damage too. Its great for increasing her over all damage, you can even HC it to add more hits afterward and alter your position for the knockdown. EF forces your opponent to come to you. Weiss has a many tools (DP, cmdthrow, etc) to be effective in close combat. Do not just activate it from full screen, that will do more hard than good. EFC a 5B and keep them in place with 2A. This is especially good if you have your sword equipped already. From there punish jump outs with DPs or use her throw them if they are sitting right. You could use the 4D pull-in to punish people with a DP or throw them as well, but you really need to choose your timing. There is no invincibility on this so you could get hurt if you mess up. Problems with Magnetism is the difficulty of making meter the its slow recharge speed.

Halo
Halo also works. Adding Celestial Gate to the end of combos assures free extra damage. You can also use Halo's projectiles in the same manner as Love to help Weiss get in. They home in on the opponent and make it very easy to lead them into a corner where you can pressure them. Be careful using Halo's projectiles while push your opponent on, the recovery is a bit longer than Love and could lead you into trouble if you don't have an extra bar to kill the recovery. Halo also give you Royal Optics. You can use it to add more damage to combos before blowing them away before you equip your sword. While in EF, Judgment becomes amazing for zoning, You can use it to switch the momentum in your favor and add more damage to combos ending in C.Gate or use it for mixups on the ground. Raster Force is also good for your hit confirms and rushdown in EF. For negatives, remember that EF does not last very long for Halo. It's recharge speeds are also slow.

No meter of any kind combo, for when the force gauge and arcana gauge is empty.

Basic BNB, works at any range, try to confirm into the more advanced 623C bnb, but you'll find yourself using this quite a bit as well because of the distance dependence.

Slightly more advanced version of the above bnb. When you can't get the 623C combo, go for this one.

This removes the 2A after Homing Cancel, so it makes it easier to practice first. The full combo still is guaranteed every time, and you add the "A" attack in the air, so overall damage remains the same.

This is the more advanced BNB, distance dependent, have to be close enough for the 4b, to hit, use when you can.

You must input the 22A then the super immediately after. An way to do this is 22A36AB. You will have your sword when the super finishes if you did it right.

Standard EFC combo, this should be one of the EFC combos you always go for.

These are for you get a random air to air hit, pick your poison.

I'm not sure which version of 623 to use yet, if you know for sure lemme know i'm guessing 623a

The if you're gdlk version from Kaichou, you can also do the EFC 2C set up combo.

The if you're gdlk combo also stolen from Kaichou

Greatly improves BnB damage on Catherine and the timing isn't actually hard. You can follow this up with 2C for the knockdown, equip and no meter, or you can go for 5C meter/EFC stuff to deal more damage. Only works on Catherine.

Time arcana focuses heavily upon using EFC combos for damage so make sure you get these combos down. Basic no EFC meter combo, for when you just bursted, or right after an EFC combo.

Variant of the combo above for guaranteed equip sword and strong oki.

More advanced Emptiness combo. Very hard to land, but you can safely equip sword after it or just Set Miene. You can also add 623C 236236E [airdash] JC for even more damage and shenanigans.

After dash 5B, you can mash 4BBB without returning the stick to neutral. Leads to knockdown.

Allows you to equip after landing. In the corner, you also get a Time Ball setup after equip with backdash cancelled into 236E.
If the opponent is too high for airdash JE to connect, use 9D JE instead. You'll still have enough time to land and equip.

Don't let the notation fool you this isn't as hard as it looks, you can actually just dash after the EFC hold back and mash b. Outstanding damage off a no meter EFC combo, keep in mind your opponent will be able to airtech early in the air, but you can punish it with air unblockable 5C. Step is only necessary on Scharlachrot and Nazuna, doesn't work properly on Lieselotte. This video uses the outdated J4B JB J4B JB [jc] JB JC JE ender.

Distance dependent version of the combo above. Have to be close enough for the 4B, to hit, but does better damage.

IAD EFC combo, looks awesome easy to do thanks to the speed up during time activation. 2c leads to equip or oki

Meter version of the above combo, get the same oki with a bit more damage.

Meter version of the above combo. More damage with all the Infinite Light equip and oki benefits.

The Zieg loop. Meterless EFC with decent damage and equip/oki ender. Pretty easy combo; works on everyone (except Catherine) but timing needs some downloading for some characters.

Much easier variant of the above combo; does slightly lesser damage. Works on everyone but Catherine.

Your 5E 6D into Zieg loop when far (or facing away) from corner. If you're wondering what the "66 or 44" means: you are always going to be facing the other way after 6D but sometimes you don't actually cross up. The start up on the C DP should give you enough time to react accordingly.

Decent damage and oki off random air to air hits.

Same as above, but with more damage and costs. 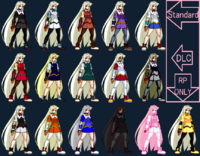