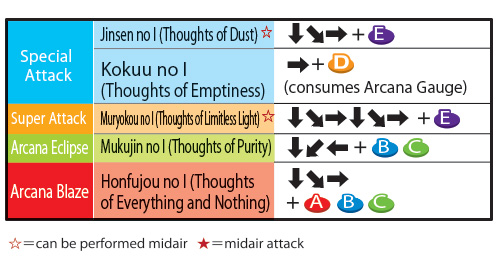 Anutpada is a mysterious clock-like mechanism that has lasted since ancient times and became an Arcana. It has the ability to manipulate time and space at its whim. Anutpada will lend its strength to those who try to preserve the equilibrium between the material world and the time-everlasting spirit world.

Time is one of the more technical arcana, it has a special EF effect that increases your speed even further, meaning that most EFC combos with Time, are Time specific. By using some meter on an Infinite Light super, most characters are able to set up a Timeball (Freedom From Bondage) and/or a Timeclone (Causality) to create some devastating okizeme setups. For the characters it works well with, Time is probably one of the stronger arcana in the game.

However, Time has some of the poorest meter gain and regeneration times in the game. A teleport instead of a regular 6HC. And not all characters have the tools needed to create Infinite Light setups from multiple situations. So characters that are highly meter dependent, reliant on HC6 for combos, or just aren't good at creating IL setups may not work very well with Time.

Causality - Your charged E moves will create a double of yourself. While you hold the E button, you will not be able to see it, but it will remain at standby in the place that you charged the move. When you release the button, it will appear and attack the opponent with the normal version of the E moved that you used. If you are hit before activating your double, it will vanish. The clone can also be hit before it becomes fully active on release, so when using time clones to fend off attackers, make sure to use them early.

Keep in mind that while the opponent has to block the double correctly, the double's attacks are not air unblockable and won't have a guard crush effect. This move is usually used in cooperation with Infinite Light to create powerful mixups. The time it takes to charge this move, and the time it takes to release this move is based on the properties of your character's E attacks.

Impurity - The Time Arcana will create a double of yourself during your back-steps. During this, the double will take attacks in your place. If the opponent hits the double, they will be caught in 20 frames of hitstop as if the move had connected. This basically makes your backdashes a practical and easy-to-use counter move. If your opponent doesn't know how to deal with this move it can very quickly and effectively shut them down.

Backdashes are invulnerable from frame 1, and the clone is active from frames 2-24. While this may seem like a large window, attacks that are in range to hit both you and the backdash clone will hit you and ignore the clone if you are not invulnerable. This means you should still try to time your backdashes well.

Emptiness - Your forward homing, 6D, changes with the Time Arcana. When you use 6D, after some startup you will instantly teleport forward. This is completely vulnerable during startup and recovery, though since you instantly move from one point to the other, it can still be used to safely go past things. You can easily use this move for special setups, running away and left/right mixups.

Time's 6D will always take one bar, even if you do this at neutral. If you use this as a homing cancel, you have to change your combos to Time Arcana specific ones because of the fixed distance you move during it.

Freedom from Words - During your EF the game counter will double in speed and your own character will move 1.35 times faster. You move much faster than the other Arcanas during your EF with time... your stick/controller will be making plenty of noise with your trying to keep up.

Overall, this is probably the best special EF effect in the game. It gives you more combo options for EFC combos that may not even work with any other arcana. But more importantly, any pressure or mixups that you do while in EF is probably completely unreactable. Between these two things, it's normally not worth bursting with Time unless you really need to.

E
This will set an orb of light out in front of you. This can be done in the air. The orb will not have an attack hitbox for a short while until after it starts to drift forward. When it touches the opponent it will rupture for a two hit attack. The attack has a lot of hitstun and untechable time so it is easy to combo off of.

This move goes very will with Infinite Light setups and Causality doubles for okizeme. The projectile itself is pretty strong and will absorb other projectiles. Also, it doesn't look like it but your opponent can actually reflect it, so be careful. This projectile doesn't really move forward much so it's not useful for getting in, but it can be useful for creating some defensive cover.

E
A ring of light will form in front of your character and capture your opponent; usable in the air. On hit, needles of light that represent a countdown appear in a circular ring around the opponent. They will be frozen in time until the timer runs out (136 frames). During this time, any attacks that the opponent receives will not generate any knockback. Instead, the last hit delivered to the opponent will impose its effects after time runs out. For example, if you hit the opponent with a 2E before time runs out, the opponent will float into the air when the effects of Infinite Light are over. Unfortunately, the prorate skyrockets when you hit the opponent with this, so no matter what you do you won't generate too much damage. On the other hand, this move is simply amazing for setups and mixups.

Original Unproducedness - This is probably the slowest Arcana Blaze... but if you manage to get it out it will stop time completely, including halting the game timer. This Blaze will freeze the stage in time for 418 frames, during which time you can do whatever you please to your opponent. Again, it is slow, but you can deal with that easily by using Infinite Light then activating this at your leisure. It is not advised to throw this out at any time. Besides taking too long, this will freeze the opponent no matter what they are doing. If they are in a down state, they will stay like that throughout the time stop. If they use a move with invincibility, they will remain like that and you won't be able to do anything to them until the time is over. If they do do some sort of invulnerable move, or wall tech, etc., you can simply punish them after the time runs out. If they can't be punished, you can cover them with projectiles to make sure it's your turn still.

While it may not be good to use at random, when used alongside a low to the ground Infinite Light combo along with a Time Clone force stand, most characters can create a situation where this Arcana Blaze will go off right after the opponent stands up. Unless they escape it by bursting or some other (punishable) means, you will have plenty of time to do a damaging combo. When used properly like this, Time's arcana blaze can work as a comeback from the brink of death, or a deal sealer when you are on match point.

When you activate this arcana blaze, your yellow homing gauge will be rounded down to the nearest whole number (i.e. 0, 1, 2, or 3). By using a good arcana blaze combo, you may be able to generate a full meter during the time freeze.