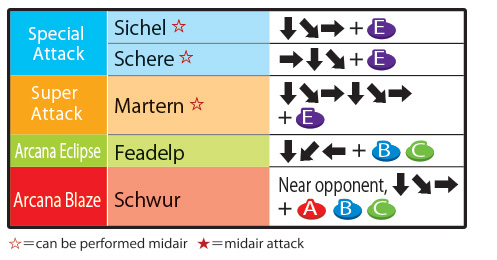 Gier is a mysterious meta-existence, a collection of purely negative emotions. Every time Gier receives a drop of Lieselotte's blood it appears from the shadows and engulfs the opponent's heart, tainting it with negative feelings.

Etsen - 5[E] and 2[E] will turn the opponent into a dark slime for 60 frames. While slime'd the opponent cannot attack you or guard, but they will be be treated as being in a down state so the prorate to incoming attacks is high and lock moves (i.e. attack throws, such as Petra 623A+B, Konoha 236A+B and Akane 236A+B) will not work.  When slime time is finished the opponent will be forced into the air to recover. From there you can catch them with a meaty air unblockable move or, while the opponent is still a slime, you could use Dark's or your own character's set ups to go for an unblock when they come out and/or keep your assault going.

Fluch - Some of Gier's moves power up during EF. To be specific, Sichel and Schere gain faster start up and do more damage. Fallen comes out faster as well and restrains the opponent longer. Please note that these changes are not too radical in nature, just maybe 1 or 2 frames faster and minor damage increases.

【Notes】
All of Gier's moves and supers can be stalled by holding the button upon inputting the move, then releasing whenever you want by letting go of the button. While stalling the attack you can controller how Gier, who usually follows you on the ground, moves by pressing left and right on the control stick. This is very useful for setting up mixups but you need to be careful, as if you take any damage while stalling any Gier attack it will be canceled.

E
Gier jumps out of the shadows to attack the opponent in a dolphin-dive manner. You can activate this in the air as well. Gier covers a large span of area with this attack, so it is relatively easy to use. This is great for okizeme and many character can use this with their own attacks, homing, or teleports for simple yet effective mixups.

E
Gier jumps out of the shadows straight up to snare the opponent. You can use this in the air as well. On hit, it will restrain the opponent for short while. This is the fastest out of all the Gier special moves but the attack range is rather narrow, making it a bit harder to use than Sichel.

E
Gier becomes a puddle to capture and restrain the opponent. You can use this in the air as well. This does not directly damage the opponent, but if they get caught in it they will not be able to move for a while. While captured the opponent cannot move at all, nor can they use specials moves. They can guard, so they aren't completely defenseless. This move has some pretty interesting properties but it has the fatal flaw of being completely ineffective against anyone in the air. For that fact alone this move is very rarely used. It looks like a low attack, but it isn't.

E
Gier does three Sichel attacks in a row. You can use this in air too. Just like the other specials, if you get hit while stalling Gier or even if Gier is already attacking, it will be canceled. This will keep the opponent blocking for a very long time. You can do high/lows, left/rights, combos, just about anything off this move. One basic use of this is to use your charged E attacks while they are forced to block this move to turn them into slimes and continue your assault.

Schwur - This is a command grab with zero frames of start up. The opponent cannot escape this if you are standing next to them. If you grab the opponent, they will be taken into Gier and turned into a slime for an extended period of time (170F). This is pretty plain for an arcana blaze... AH3's Force Gauge places much more focus on Bursts and EF, so the usefulness of this move depends largely on what people come up with as the game progresses.

About Dark Slimes
Normally you cannot do anything as a slime. However, if you are using the Metal Arcana you can use Energia (Metal's charge; 4E). As a side note, every character has a different dark slime animations. Nice touch.