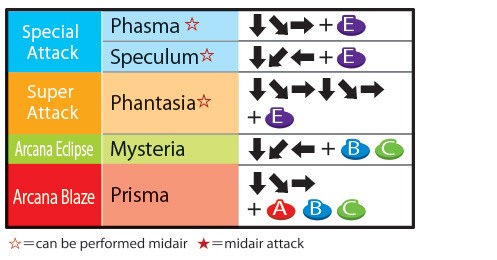 This Arcana looks like a giant swarm of ladybugs together, spiraling and glittering like a kaleidoscope. Heliogabalus used to be the Arcana of Dorothy's mother, but now protects Dorothy herself.

Deflectio - When you full charge an E move, you will disappear for a moment and a mirror image of your opponent will instead attack. The attack range and damage of this is exactly the same as your opponent's. Note that this will only happen on a full charge.

Rarua - Makes your character translucent and a bit hard to see. It actually doesn't work that well, so you can't really use this for unblocks etc.

E
This move will create a mirror image of your opponent and have that reflection use one of your opponent's moves. The move that you copy depends on if you use this in the air or on the ground. Typically, the ground version copies a ground rush move and sometimes an anti air move. The air version is usually an air-to-ground move. The start-up and reach of the reflected move really depends on your opponent, so you'll need to do some experimenting or you'll magnificently whiff most of what you throw out. It can be a great tool, but it takes some devotion to learn how to use this properly.

E
Sets a mirror out in front of you. Usable in the air. The mirror itself can attack and it reflects projectiles. It is pretty big so it can function as a move to deter jump-ins. If you set this up, it will actually completely shut down Kira's j.E. The mirror stays out for a decent amount of time, so you can use it for okizeme as well. Besides being a bit slow on start-up, it is a good move all around.

E
This is the super version of Phasma. It will typically copy your opponent's super moves. Sometimes it copies strange moves that you normally would't use like Konoha's Hyaku Bunshin (236A+B) or Nazuna's old (AH2) C Kagiroi (623C). Much like Phasma, this move has the potential to be very good if you take the time to learn to utilize it.

Prisma - Heliogabalus will create an after-image of you that attacks the opponent a split second after you do with the same attack. Thinking of it like Duo Lon's "Ougi: Tajuu Genmu Ankei" might make it easier to understand... maybe. This works for specials and supers, but not for projectiles or locking moves.

Check the Information Page to see exactly what moves are copied by Heliogabalus's Fantasia and Phasma.