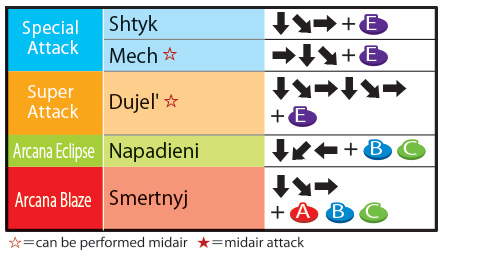 "I'll eradicate every trace of evil in this world!" Koshmar, the Punishment Arcana is a meta-existence that is the complete opposite of Sorwat, the Sin Arcana. Koshmar made a contract with Elsa, whose life was hanging by a thread, to prolong her life.

Blue - When you charge your E moves to the max they will become unblockable but won't cause launches. Instead, they will cause the opponent to be stuck in hitstun for quite a while. You can incorporate this into combos; there is almost no prorate so you can generate some pretty brutal damage.

Salvation - During an EF with Punishment your attack power will increase and your defense power will decrease. Also, Arcana specials and supers will do twice as many hits. If you use this exclusively for EFC combos, you mostly don't have to worry about the defense penalties and can just take your massive damage. This is a particularly good EF trait.

E
Sends out a projectiles along the surface of the ground, like a reppuken. The start up is fair, but as a projectile it is extremely dense and cannot be reflected. While Salvation is in effect it will do two hits.

E
Koshmar's arm will appear and slash at the space right in front of you. You can use this in the air. This won't knock down the opponent on hit, so be careful. While Salvation is in effect it will hit four times.

E
This move is slow... but has an infinite number of clash frames in the start up. No matter how times something hits this, it will clash it all. You could call this a pseudo-counter move. It is also air unblockable and will wall slam on hit. Salvation will cause this move to hit twice.

E
This is the super version of Sword. It can also be used in the air. It comes out very fast and it will ground bounce the opponent no matter how you hit them with it. You can use it in combos pretty easily, but if you use it in the air be aware of your height in relation to your opponent. It is pretty easy to whiff this if you are too high. Salvation will make this move hit six times.

E
This is a counter move. The reception hitbox comes out in 1F and the counter itself is unblockable and does pretty respectable damage. Unfortunately it will not counter low attacks or projectiles, you'll just get hit. The damage of this during Salvation is ridiculous.

Death - Koshmar will appear then swing a giant sword downward onto the opponent. The attack range is just as big as the sword looks and is completely unblockable. Sounds good... if only the move was not as slow as it is. If you take damage before Koshmar attacks, Koshmar will disappear.