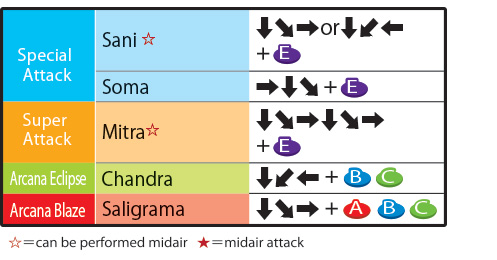 Saligrama is a mysterious die-like mechanism from ancient times. Its powers are strong enough for it to be called an arcana.

Savitr - This will randomly cause a period of invincibility from start up to the release of any ground E move. Sounds nice, but it's very random, making it much too unstable for you to rely on. At most, you'll get lucky every once in a while.

Manyu - This will randomly force a counter hit status after landing a non-CH hit on your opponent. This seems to activate more reliably than Savitr. Due to how counter hits work in AH3, this could random and dramatically increase your combo damage. A very powerful tool if you have the "luck" for it.

Tapas - This passive attribute probably has the highest change of working. This will prorate damage taken by an extra 10% when hit, causing you to take a little bit less damage over the course of the round. This is also an overall strong trait.

Pusan - Above the others, this passive stands out quite a bit. After all, it can save you life if you're lucky. This will save you from death for one hit. Remember that this only works on one hit at a time, so it won't carry over through multi-hit move or combos, but it will save you from multi-hit moves that only KO on the last hit, i.e. Akane's 623A+B and Halo's Blaze. Works a lot more often than you'd think.

Brhaspati - During EF with Luck, the rate of activation for all your passive traits will increase. If you normally use EFC for combos then this probably means very little for you. However, it lasts longer than most other EFs so you could raw activate then start your neutral spacing.

E
Cee-lo time. Both inputs have you throw a die forward. 236 throws a die out in from of you, while 214 throws a die out from your back to the front. The die itself can attack the opponent, but this gets the most damage from the explosions after the die lands. How many times it explodes is determined by the face up number on the die. The dice won't disappear once it's out, so you can set up pretty strong reversal-proof oki with it.

E
This move will increase your luck, thus increasing the activation rate of your passive attributes. The effects pass over between rounds, so you can really stack this up.

E
The more dice the more we could bet. This move will throw two dice out at the same time. The numbers on top are the same numbers of explosions that you will get, just like Shani. If you get a matching pair then you receive a special attribute. To be specific, the explosions will be larger and the prorate of each hit will go down only half as fast. It will increase the damage potential greatly, but it is very rare. You can throw this out on top of your regular dice summon and really stack on the number of explosions.

E
A super Soma... sort of. This will greatly increase the activation of your passive attributes and you will only get between 4 and 6 on dice rolls. The effects are stronger than Soma, but they are only temporary.

Saligrama - Saligrama appears and has you roll a die. What you roll determines which attack comes out. If you roll a one, you'll only get a bunch of little dice with small explosions. If you get a 2, 3, 4 or 5, larger dice fall from the sky and have the same number of explosions as the face up pips. If you land a 6, the mother of all dice lands and explodes for massive damage (5000+3000×6 to be exact... yeah really).

Dice
If you hold the E button down during Shani and Mithraism, you can stall the release of the die. Basically, add more start up and let it go later.